From the name of it, Three-Points-Perspective is the type of perspective we draw using 3 vanishing points. Each with its own set of lines that converge toward it.

Three-Points-Perspective is usually used to draw cityscapes. It also has some notable use in story-telling. And just like One-Point-Perspective, it’s less used compared to Two-Points-Perspective, since it’s usages requires looking at things from a specific angle, as we will see shortly. 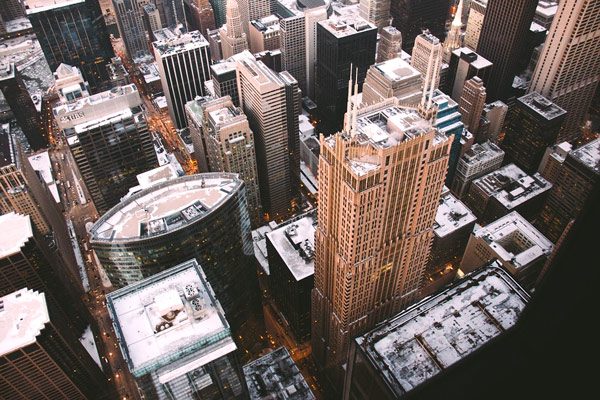 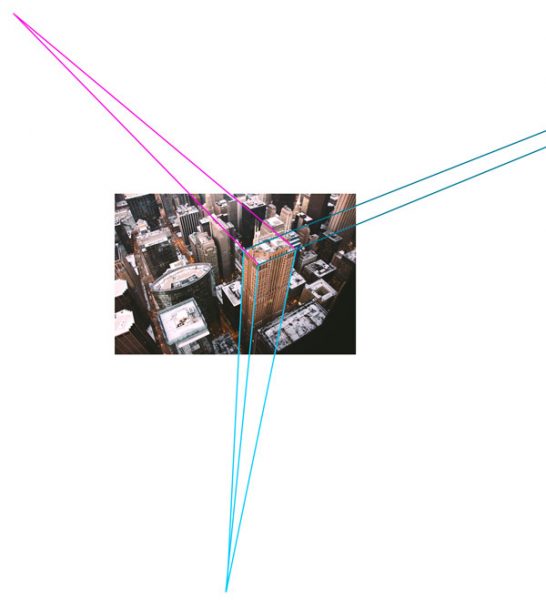 The 3rd vanishing points is not shown in the picture, since it’s too far to fit the page, but it’s out there somewhere.

You may remember this example I used in the Two-Points-Perspective:- 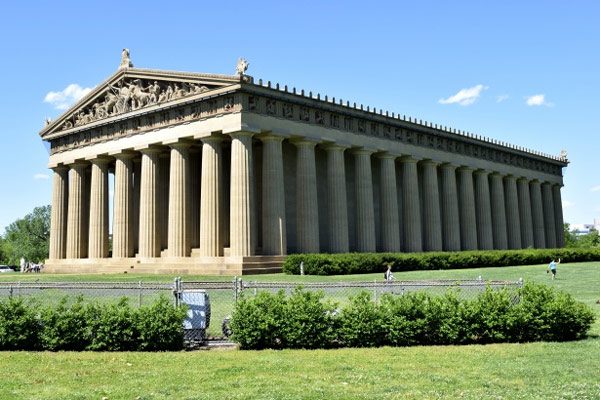 When extended, the two sets of parallel lines converge to make the two vanishing points:-

But how about the 3rd set of lines? Well, we can extend these lines forever, and they would never meet. Which is the reason why there’s only 2 vanishing points in Two-Points-Perspective:- 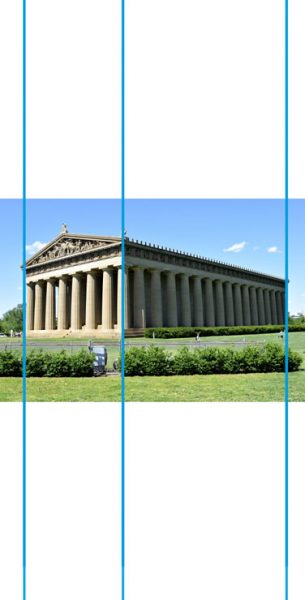 In other words, the angle we look at the building from is the reason we have a 3rd vanishing point, where we need to use Three-Points-Perspective to make the drawing.

First, we start by drawing a triangle, each corner of the triangle represents one of the 3 vanishing points:- 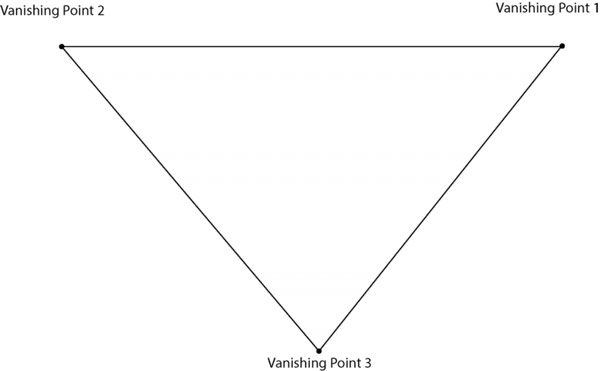 It’s worth noting that the final drawing is going to be at the middle inside these 3 points. Because anything drawing very close to the points is going to look so skewed, not matter how you placed the 3 points.

Next, we draw a straight line, just like the case with Two-Points-Perspective, this line represents the corner of the cube we are drawing. This time around, the line doesn’t need to be vertical, but needs to point toward the vanishing point at the bottom:- 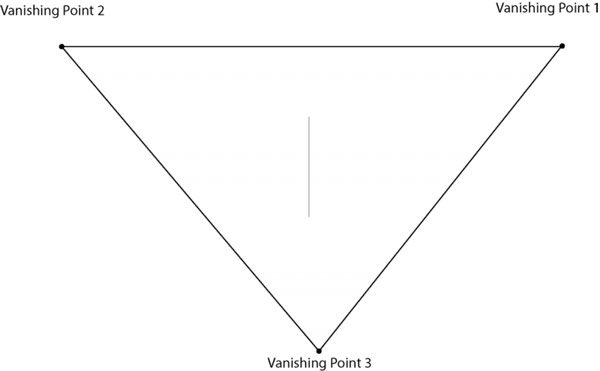 We connect the tips of the line we drew with vanishing point 1 and 2:- 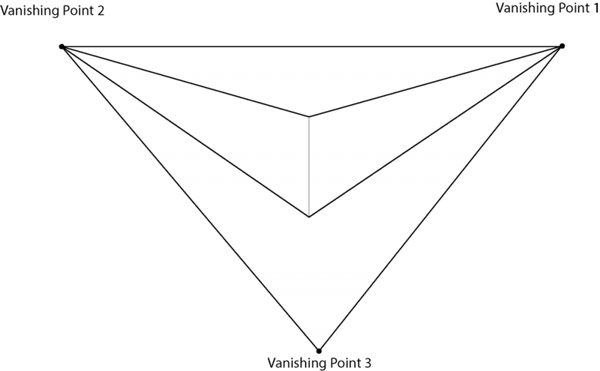 No, it’s time to draw the side corners of the cube. When we drew Two-Points-Perspective tutorial, we drew two vertical lines between the receding lines going toward the vanishing points, like this:-

In case of Three-Points-Perspective, The two lines are not straight, as they need to converge toward the third vanishing point, like this:- 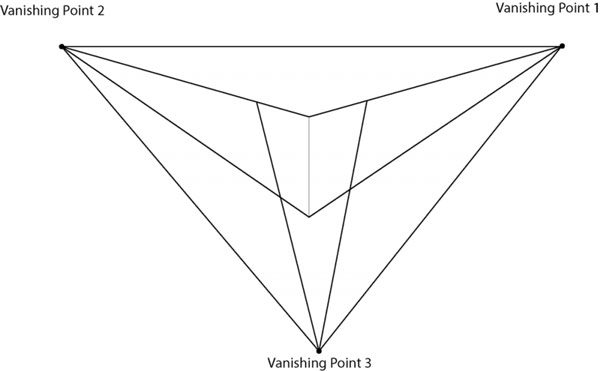 To make the upper edges of the cube, we draw two more lines. Each line starts from the upper corner, and goes to the vanishing point in the opposite side. I drew the two lines here in actions:- 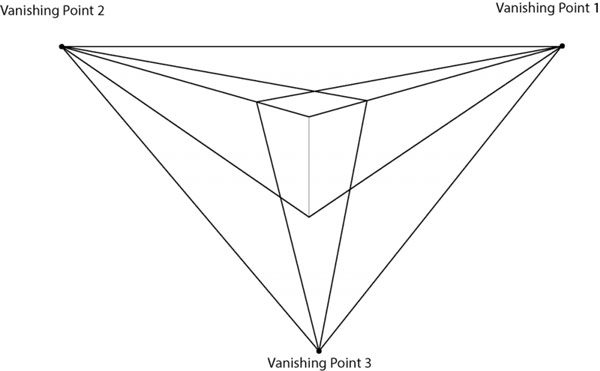 By now, we are done drawing a cube in Three-Points-Perspective. We can go on and add more details, using the 3 vanishing points we have. I added a little window to the cube here, using 2 of the vanishing points. To do that, I extended two lines from vanishing points 1 and vanishing point 3 that intersect with each other to form the window:- 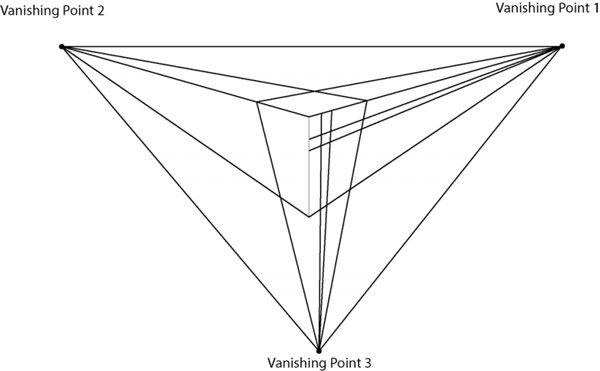 You may remember that I did the same thing when we draw Two-Points-Perspective in the last lesson, but I only needed to use one vanishing point there, as two of the lines are perpendicular to the horizon line:-

Here’s how the window looks like after I erased the lines I extended:- 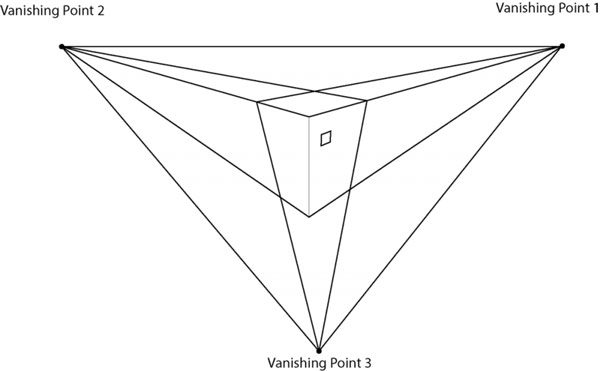 Continue adding more cubes and details to the drawing until you draw the scene you want.

When To Use Three-Points Perspective?

So far, three point perspective is the kind of perspective that distort the object the most. It is because we are not facing any of the edges of the cube or object we are looking at.

We will look at Aerial perspective in the next lesson of this series.

As long as you have a large enough canvas, drawing this kind of perspective is easy. This is totally doable if you happened to draw digitally. In case you’re drawing on paper, you may need to place some newspaper below your paper, and draw the vanishing points there.

Next lesson:- What is Aerial Perspective (atmospheric perspective)? How to draw it? And What causes it to happen?