Huion Inspiroy Q11K is a good graphics tablet for the price, especially when we take into account the good active area. It supports a good amount of pressure (though that’s not what you should buy the tablet for). It has no tilt sensitivity, which is a bonus feature it would have been nice to see there.

Having 8 hot keys is a good number to help you speed up your workflow away from the keyboard, though using the keyboard has its own advantages.

In case you got your hand on Huion Inspiroy Q11K, don’t forget about the 8 spare nibs inside the pen holder. :>

Having wireless connectivity is a very nice feature. It’s both nice if you plan to place the tablet on your lap, or in case you plan to carry it around with your laptop. Just bear in mind that it may not work as intended.

I guess driver issues is quite common in graphics tablet these days, so be prepared to deal with them at the beginning. There’s a good chance you will be able to make it run. Also, if all failed, consider mailing Huion customer service, they will try to help you, and possibly send you a new driver version to help you solve your problem (happened to me before). 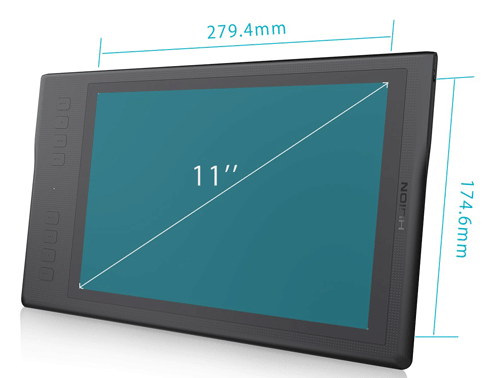 The first thing you would want to know it the pressure sensitivity level, which is 8192 levels for Huion Inspiroy Q11K. Pressure sensitivity allows you to create a thinner & thicker lines based on how much you press the pen on the tablet surface. You can control the opacity that way as well.

While this is more than enough to help you create a good art, it shouldn’t be what you look at when it comes to judging a tablet. This is a long topic, but the reasons in short are:-

What I am trying to say is, pressure sensitivity is more of a marketing gimmick to get you to desire the newer tablets. A similar tactic is used for computer mice polling rate.

Huion Inspiroy Q11K doesn’t support tilt sensitivity, which is a bonus feature we mostly see in Wacom tablets only. If your drawing program supports it, it allows you to imitate the way you could tilt your brush in traditional art. This is a niche feature many artists use, but it would be nice to see if in more graphics tablets in the future. So that more artists could try it & see if it’s worth it for them. If you’re new to digital art, or you don’t use tilt sensitivity in your current tablet, then you shouldn’t worry about not having that feature here, as there are a lot of things you could learn to do with what you will have here.

Let’s get to a very important aspect here, Huion Inspiroy Q11K has an active area of 11 X 6.875 inches (or 279.4 X 174.6mm), making it slightly larger than the Intuos Pro Medium. I tend to recommend at least medium-sized tablet for those willing to draw with their tablet, especially if they own a large computer screen. This makes Huion Inspiroy Q11K a good choice for them.

I think that for the most part, Huion Inspiroy Q11K can provide a good drawing experience. The only time I would worry about the drawing experience is in case you’re too used o Wacom tablets. This worked quite well for many artists, but it still feels different than Wacom offerings. Not necessarily in a bad way. The price difference makes it worth the try, especially if you have had it enough with Wacom driver issues. It can work well with you too. :>

Huion Inspiroy Q11K comes with a rechargable pen. I tend to hear artists worry about such pens. Like how you would need to recharge it

The back of the pen has no eraser tip. Which is the way some graphics tablets, like Wacom, imitate the way traditional pencils look. Instead, that’s where you plug the pen to recharge it.

Inside the pen holder that comes with it, there are 8 spare pen nibs (or pen tips). So that you could change them whenever the one you’re using gets pointy. That’s necessary to avoid scratching the tablet surface over the long time. The harder you press the pen on the tablet surface, the less each nib will last.

For more information about graphics tablets nibs. You can refer to my post here. It was written about Wacom tablets, but it also applies about other graphics tablet brands as well:-

The pen itself is made of plastic, and has no rubber hand around it like Wacom’s does. This is fine if your hand doesn’t sweat, or if you can hold regular pens well.

There are 8 hot keys on the top of Huion Inspiroy Q11K. These keys can be reprogrammed using the driver to do keyboard shortcuts for you. So that you won’t have to reach for your keyboard every time you needed to press a shortcut. The keys can also be programmed to do mouse clicks & other stuff. Some artists may prefer to use the keyboard instead of hot keys, as that will give them access to more shortcuts. I prefer the keyboard as well, but sometimes use hotkeys when I am doing a task that doesn’t require many shortcuts. At the end, whether you prefer the hot keys or the keyboard is up to you. :>

The hot keys are arranged in two sets of columns, which is good. But I would have preferred if they had them in pairs, like how we had them with the New Huion 1060 Plus (reviewed here), as that’s the best way to have the buttons in my opinion.

On the top of each key, there’s a brail mark to help you identify which button your finger is on.

There’s no touch ring or anything of that sort to help you resize the brush or zoon in & out. But you can customize some of the hot keys to do these functions for you.

Huion Inspiroy Q11K supports wireless connectivity, meaning that you won’t need to have it plugged & have to deal with cables. In my opinion, Wireless connectivity is super convenient if you place your tablet on your lap while drawing, like I do. It makes it easier to move it around, so you will appreciate it if you plan to use Huion Inspiroy Q11K with your laptop on the go. 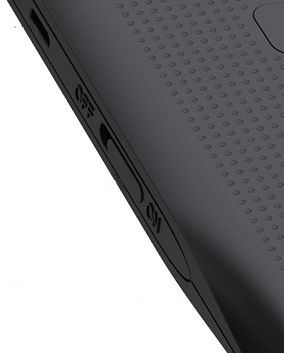 Huion Inspiroy Q11K connects wirelessly via the USB dongle that comes with it. I prefer that to bluetooth, since it’s easier & more reliable than bluetooth (some others may actually want bluetooth, to be fair). In case the tablet’s battery needs to recharge, you can still use it while you’re charging it. You can turn wireless off via the switch on the side in case you don’t want to use it as well.

Now to be honest, while wireless connectivity is lovely, especially when it doesn’t cost much. It sometimes doesn’t work as reliably as cable. It depends on the tablet. Sometimes it works, but you can’t get pressure sensitivity to work at all. Sometimes it acts weird when you press certain buttons. There’s a good chance wireless will work quite well for you, I am mostly telling you this to help you adjust your expectations until you get to try it.

Sadly speaking, all graphics tablets of all sorts tend to have issues with drivers, including Wacom. So be prepared for some possible installation issues. The most common issue I tend to face with Huion itself is that the driver works flawlessly, but then disconnects all of sudden. Unplugging then plugging the USB cable again solves this issue.

There are various ways to hopefully counter such problems, trying different driver versions, the one from the CD, or the one from Huion’s website helps a lot. Also, please make sure that you uninstall any Wacom driver from your computer before you install Huion Inspiroy Q11K’s driver. It will save you a lot of time.

Overall, Huion tablets are a good way to get into digital art. Particularly if you want something affordable, or if you just don’t want a Wacom tablet.

You noticed I kept comparing it to the typical Wacom tablet, since you’re probably a Wacom user thinking of trying another brand. If this is your first graphics tablet, you can do well with it, but keep in mind the following points:-

I hope you liked my Huion Inspiroy Q11K review, and see you again in another review. ^^