Drawing Proportions is one of the aspect that beginners artists tend to get wrong often. I personally had bad experience with that for a long time. It hasn’t been until few years ago that it begun to stop being a problem to me(I still get it at times though, specially when I draw a new pose or something :D).

While there are many methods to get the proportions right. The counting method I introduce here is the easiest and the most straightforward of them. During the post, I will focus on the front of the figure. Keep in mind that I am more focusing on how to do the measuring yourself instead of giving you certain measures to use all the time. Which doesn’t seem right. For the maximum benefit, I will also give some additional tips about the face, though that alone is worth a post on its own.

One of the most common methods of measuring and drawing proportions is the head count method. The head count method depends on using the head as a basis for any part of the body you want to draw. Similar to the way we use Centimetre & Kilometre to measure distances. Before you even start your drawing. You have to mark how much long the head is going to be using your pencil (This is why artists extend their pencils and look at it before they start drawing something). And use the size of the head to decide how much big the head is compared to the rest of the paper. This is useful to avoid getting to the bottom of the paper while working on your picture. And it is also useful to measure the rest of the figure in proportion with the head size.

Also note that the distance between point A & B are almost the same as point B to C. The hair cap can be much longer in some styles thought. But this is a basic step toward understanding the head proportions.

Generally speaking. The adult human figure is about 7 heads in general. And sometimes it is about 8. But there are cases when it is more than that, like in tall humans. The teenager figure is about 5(Lolita is about 5 1/3 heads).
Please take note that my own drawing is not %100 precise, but close enough to what I am saying, drawing is different than math in that you don’t have to measure everything right precisely using numbers. Doing so will lead you to loss some of the rhythm in your drawing and could lead your drawing to appear stiff.

Proportions of the face features:- 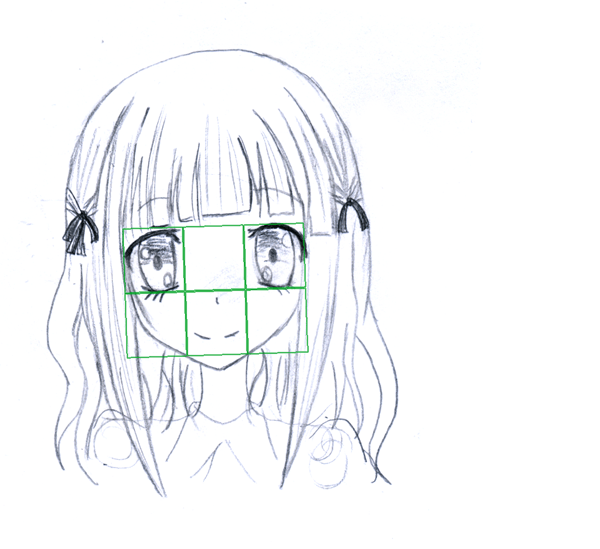 You can also use the eye(or the nose if you like, and if there is any, lool) as a way to measure the size of the cheeks the picture at the left demonstrate what I am talking about(in case you lost me there^^)
~As I previously stated, the space between the chin to eyebrows tend to be equal eyebrows to tip of head~

A practical Example:- Using the head size to determine the size of the rest of the human body

Most drawing books and articles use the adult figure to teach people how to count the heads. while there is nothing wrong with that. As people, from what I know, tend to draw adults much more than any other type of figures. For the sake of change(and for cuteness, of course). I will also do it on my 12 years old original character. Lolita de Calémia^^
I am also not going to use a naked figure in my teaching. While the naked figure can make it easier for you to count the heads, most of the people I know who draw usually draw clothed figures. So I want to make this tutorial as close as possible to what they do(my apologies for those who are interested in naked figures)

I made the figure at the left so you could study it without referring to the points below. For the sake of clarity, I will explain the whole thing in details:-

Notice how the arms equal about two heads. Including the hand or most of it. Which are not shown clearly in the picture unfortunately :(
Tip:- You don’t need to draw the guidelines each time. Just marking them on the side of the paper is enough for lazy artists~
~The reason why there are not many heads in my figure is that I count the hair as part of the head~
I plan to write more about proportions in the futures. Including the detailed proportions of the hands. For more reading, you may also find the following book(s) useful in getting  the proportions right:-