For over 2 years, the new Intuos Pro was only available in a medium or big size. I didn’t think of that as a big issue, since I usually recommend medium to large graphics tablets to anyone willing to draw with them. Since I don’t think small tablets are the easiest to use for drawing, especially if you have a larger screen, as you have to draw with your wrist, as opposed from your shoulder.

Despite that, small graphics tablets are still good for other tasks, like photo-editing, their small size makes them easy to carry as well. They are also good enough for drawing if you have a small screen (11 or 12 inch). See my post about what graphics tablet size to get, for a more detailed discussion about this.

When it comes to all the main features, small Intuos Pro is so similar to the bigger Intuos Pro models, except that it doesn’t support texture sheet, which allows you to customize how smooth or textured the tablet surface. It also doesn’t have a paper edition, which allows you to draw on paper using the special pen, and to transfer these drawings to your computer.

All in all, despite the missing features, the small Intuos Pro provides you with everything you would want if you wanted a small Wacom tablet, as long as you don’t mind the price.

You can check the small Intuos Pro price from the following Amazon & eBay links:-\n#CommissionsEarned

The small Intuos Pro has an active area of 6.3 x 3.9, this is the actual area of that tablet you can draw on, which are marked by the brackets on the tablet itself, you can see these brackets here:- 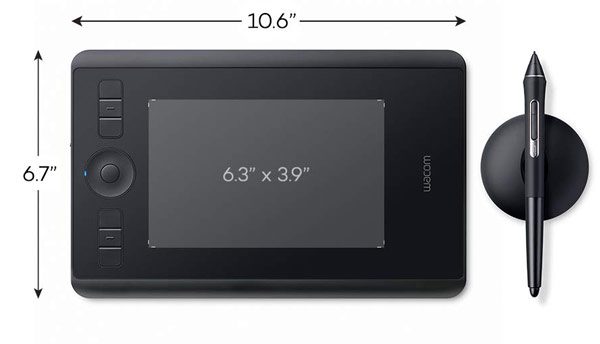 While it’s possible to be able to draw in such active area & create great artworks, some artists may prefer a larger area. As the additional area will allow you to draw with your elbow. For things like photo-editing, having a small active area is not as big of an issue. Small tablets are much easier to carry around compared the larger tablets.

Just like its bigger brothers, the small Intuos Pro supports 8192 levels of pressure sensitivity (see the definition below), which is the norm now. Since this is a common feature, I won’t consider it as a pro for small Intuos Pro. I never considered having high pressure sensitivity as an important thing, since it’s not easy to take advantage of it. The tablet size, and how drawing feels with it is what you should consider if you decided to get this tablet. For some artist, buying an older tablet that’s mid-sized is much better. That’s why you should also check out the medium size of this tablet when you go shopping for this one.

What’s pressure sensitivity:- It’s a graphics tablet feature that allows you to create thinker or thinner lines based on how much pressure you apply on the tablet surface. It can also be used to create more or less transparent strokes as well. Depending on the brush you have, and the drawing program you use.

Besides pressure sensitivity, small Intuos Pro also supports tilt sensitivity. Which makes you tilt the pen to change the stroke shapes. The pen supports 60 levels of tilt in both directions. This is a less essential feature, but nice to have & try out. Since most non-Wacom graphics tablets & pen displays don’t have it.

One of the best things about Wacom tablets is the low initial activation force (IAF) it has, which means you don’t need to press the pen against the tablet much to get strokes to appear on the screen. That makes drawing with it convenient. The low IAF of Wacom tablet is what makes me recommend it to people who want to get a tablet to use for tasks like video editing & web design. 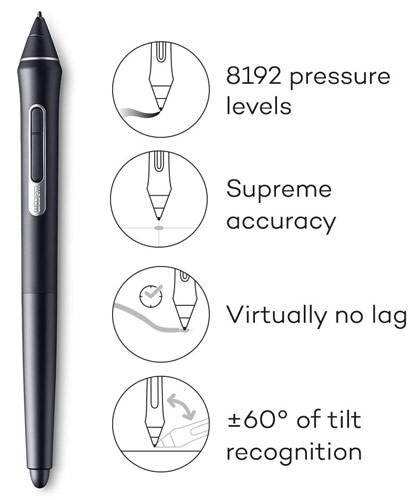 The small Intuos Pro comes with the Pro Pen 2, which supports the 8192 pressure sensitivity levels. There are two buttons on side of the pen. These two buttons can be customized the same way you do with the express keys of the tablet itself. Having such buttons is a very common feature of graphics tablet pens, including Wacom alternatives.

There’s an eraser at the back of the pen, which makes it possible to switch between the brush & the eraser tools the same way you do with traditional pencils. This is a nice feature in case you came from traditional art background. I personally stopped using the eraser part after some time, since switching between the brush & eraser tools is much easier using a keyboard shortcut (or using the express keys, whatever you prefer). It’s worth noting that the eraser side of the pen also support the 8192 pressure sensitivity, which mean you can draw with it if you like.

The pen comes with spare nibs 10. Having spare nibs is important, since the friction with the tablet surface makes the pen, which makes the nib pointy. For that reason, changing the nib when that happen can help you preserve your tablet. For more into about it, see my following post:- How much Wacom nibs lasts? And how to make your graphics tablet nibs last longer 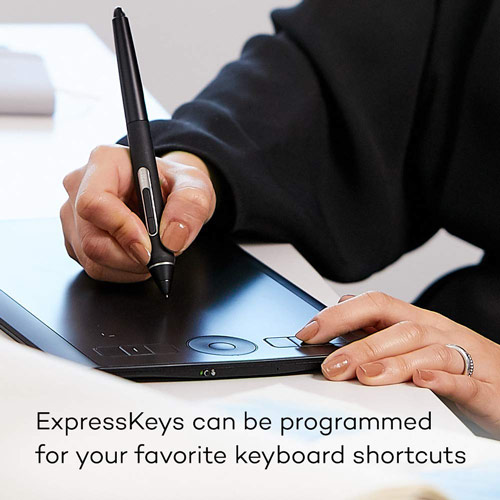 The small Intuos Pro comes with 6 express keys, 3 on the top, and another 3 at the bottom. Which is less than the 8 available on the medium & large size. That’s the same as the previous small Intuos Pro too. These button can be customized to do all sorts of functionality, like keyboard shortcuts & mouse clicks.

Besides the express keys, there’s a touch ring between the express keys, which can help you resize the brushes quickly, it can also be used to zoom in & out, or to rotate your canvas. The driver software gives you the option to customize the ring to do any other function you fancy. You can toggle between 4 of these functions using the button at the middle of the ring.

One of the best features about express keys in Wacom products is the ability to customize the keys to work differently in each application. For example, you can set one of the express keys to switch to the brush key in Photoshop, while activating the rotate tool in 3Ds Max, to give you an example. 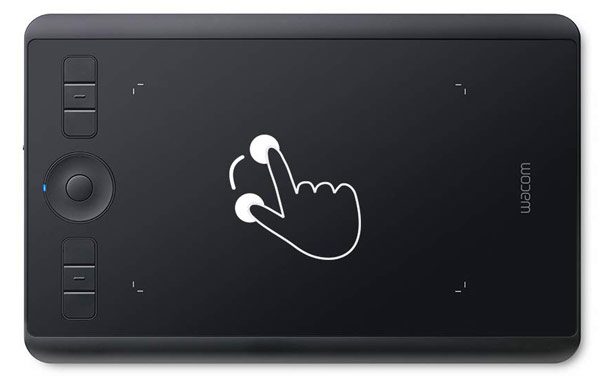 Just like the previous Intuos Pro, this new model also has multitouch support, which makes it easier to do things like zoom in & out or pan using gestures. Also, the touch feature allows you to move the mouse cursor around, and it works as a giant touch pad. It’s exactly as responsive as you may expect it to, but it’s so nice to have.

There’s a toggle on the side of the tablet, which allows you to turn off touch support. That way, you don’t have to worry about it getting in the way.

The small Intuos Pro can be connected to your computer wirelessly via bluetooth. It’s a neat feature if you don’t want to deal with cables. I like it personally since I am the kind that have my drawing tablet on my lap as I draw.

That’s all nice, but if you plan to get this tablet because of wireless support, keep in mind that it may not work as you expect it to, since you may face many connectivity issues with it, so keep that in mind.

Having wireless graphics tablets that work reliably is a matter of time. Once that happens, I believe digital art is going to be much better. 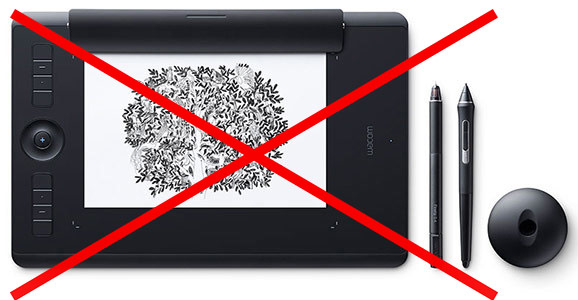 The medium & large size of Intuos Pro have a special edition called “Paper Edition”. That special edition allows you to add papers under the paper clip, and to draw on it using the special black pen that comes with it. The drawing you make that way is stored within the tablet, and you can transfer it to your computer later on. The paper edition supports having multiple layers in the drawing (you need to make sure you add a new layer as you draw). I personally draw all-digital, but this is a nice feature to use for those artists that came from traditional art background.

Unfortunately, there’s no paper edition for the small Intuos Pro, which I hope is a temporary thing, since this is a nice feature to try out. Since many artists draw better on paper, but still want to take advantage of digital art.

You can read more about this in my Intuos Pro 2017 review here.

By the time of writing this post, small Intuos Pro doesn’t support texture sheets. Which is Wacom’s answer to artists complain about the hard tablet surface wearing down their pen nibs. This feature allows you to place one of 3 texture sheets on the top of your tablet. One of them is the smooth texture.

Whether this tablet doesn’t support texture sheets or not, you can make your own. That’s specially the case if you want a much smoother surface. Since it’s common for the nibs to wear down with the latest Intuos Pro tablets, especially when the tablet itself is new.

It’s nice to have the option for a small Intuos Pro tablet. But it felt a bit disappointing that Wacom didn’t provide us with all the features of the larger Intuos Pro models. Like the paper edition & texture sheets. So owners of the older small Intuos Pro won’t get that much by upgrading (besides the bluetooth support & the compact design maybe).

As long as you are fine with drawing on a small Wacom tablet, you would be fine with this tablet, otherwise, I recommend you to get a bigger tablet.

I hope you liked my small Intuos Pro review, and see you again in another review. ^^

You can check the small Intuos Pro price from the following Amazon & eBay links:-\n#CommissionsEarned