My story with drawing

My story with draw is kind of simple. I have always liked drawing, I first started drawing when I was in elementary school. I was so much into Disney characters back then. I primarily drew Donald Duck and Uncle Scrooge most of the time, and I sometimes drew Mickey and some other characters too. I was not that great, but it was much better than my peers. And that drew attention to me for a good amount of time. I even made simple drawing lessons to my friends back then, hoping that I can help them do it as well. I continued to draw for a year or two, then I stopped after that as I got busy with other things(I got lazy too). It was not until 2005 until I started to get back into drawing. It was when I got into Anime. I was so much into the Anime Fruit Basket. Which is still one of my favourite Anime until today. And it occurred to me at the time to try draw some of the characters from it. mainly Honda Tohru <3. It lasted for few days, but then I stopped drawing…. Again.

Getting serious about Anime Drawing

And later in 2008. I got into an Anime community, where I found people who were good at drawing. Which made me decide to get back to drawing once again, I kept drawing every once in a while, but I was not doing it enough or regularly so I could improve. It was not until February 2010 when I started to take it more seriously. Since I always dreamed of being great at drawing, I thought I should put enough effort at that. I dedicated a small but a regular amount of time a day to drawing(I talked about it in more details in my My Drawing Schedule post). I showed some of the best drawings I made to a bunch of online friends, and I received good feedbacks for them. Which helped push me forward as well, I kept at that for long time, and the results were good.

There are days when I did not feel like doing it, and I had stopped for days at times. But I always kept getting back to it. I improved slowly but consistently, to get an idea how I improved, take a look at the two images of Kurumi from Spiral to see the difference in 3 years:- :) 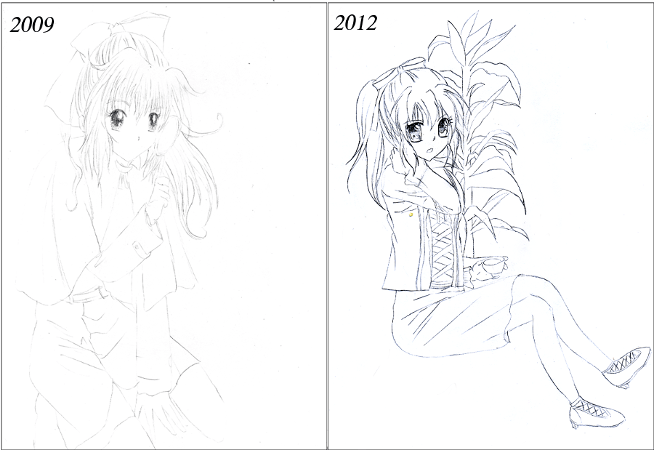 Pretty neat, ne? My lines today are more accurate and smooth than that today by the way ^^

You can do it too

Now I told you about my story with drawing. You may think something along the line of “But I don’t have talent”. In my personal opinion, talent is overrated, while I have tons against it, planned efforts can do much more than you think. Note that I said planned efforts, meaning you must have plan to how you want to improve. Like how much time you pan to put into it, what recourses are you going to read, or how do you plan to train your hands. The choice are many, and it is mainly up to you on how you train yourself. With all honesty, efforts alone can’t guarantee you that much result. But they can’t be underestimated too. Which happens most of the time.