Visual Novels Have All Sort Of Terms & Genres. Let Me Explain Them To You

If you’re new to visual novels, chances that you encountered many of the terms & genres used to describe them. Just like someone new to Anime may not know what the terms Shoujo or Shounen mean. A new visual novel player may need a reference on what the terms specific to them mean. So in this post, I will try to explain what each term or genre means, in the most clear way as I could.

Some of you may not consider these terms “genres”, and they are right to a degree, but I will go with the that term anyway, as it makes things easier to understand, in my opinion.

Credit for Clephas from FuwaNovel forum for giving me feedback & additional information on this topic, which clearly made this post better. This includes the difference between Utsuge & Nakige, and many other info about Chuunige & Charage.

These terms work by combining two words:- Some word + Ge. The word tend to be the distinguishing feature of the game, while “Ge” is the Japanese shortcut for “Game” (spelled as “Gamu”). Most of the words are quite straightforward if you know Japanese, so it’s a good chance to learn few terms if you’re interested in the language. I will explain each words for each term as I go through them.

This naming convention isn’t just reserved for visual novels. Similar terms are used to describe other kind of games. Like the term Netoge (ネトゲ), which stands for “Net Game”, and it refers to online games. 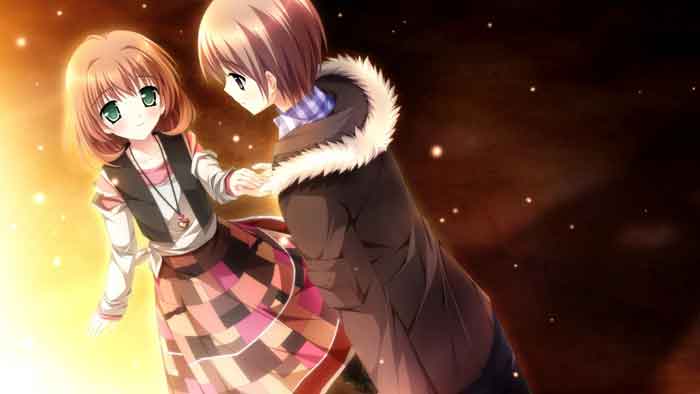 A charage (キャラゲ) is visual novel that focuses on the characters & their interactions. As opposed to visual novels focusing on the plot (plotge), which is another genre we will talk about shortly. Charage takes its name from the Japanese word “Chara” (キャラ), which is the Japanese shortcut for “character”. Japanese language has many terms that are derived from English like this, like the word Pasokon (パソコン), which means “Personal Computer”, and it was derived from “Personal Computer”. Another word like that is Sumaho (スマホ), and it means Smartphone, but I digress.

Charage visual novels tend to have light-hearted plot, but can get serious or dark to some degree,  It can goes too dark in some cases, but that’s not the norm. It’s very common to confuse between a charage & Moege, since a moege can focus on the cute characters in it. The easiest way around that is to think of Moege as a sub-genre of charage. 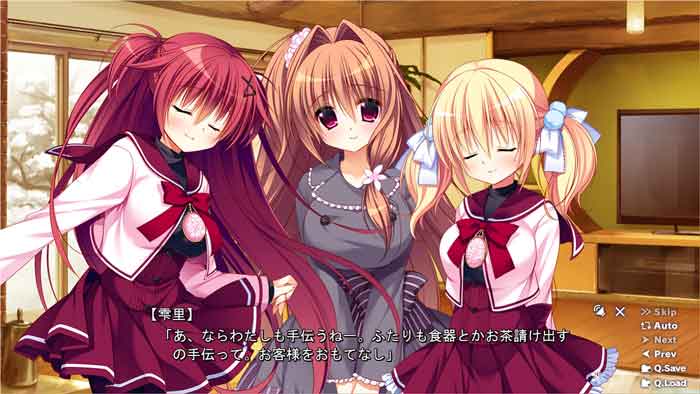 Moege (萌えゲ) is a visual novel that focuses on cute characters, usually cute girls, and the art style tends to be cute.

The term Moe (萌え) literally means sprouting or budding in Japanese. And refers to the characters that evokes feelings of affection or excitement due to their innocence or cuteness. The term is very often used to refer to cute characters. As I said, Moege visual novels primarily features that. The story of a Moege visual novels tends to be very light-hearted, even the conflicts in them, if any, tend to be light. They are the Gochuumon Wa Usagi Desu Ka? of visual novels world.

Moege is often confused with Charage, since both has to do with characters interaction. To make things simple, I personally consider Moege a sub genre of Charage. To give you some history on the two terms:- Moege started as a generic term for stylized cuteness , or moe. By that definition, Visual novels of all kinds could be called moege. Then charage came as an evolution of moege, since the fans wanted deeper character interactions.

In other words, the words moege & charage were generic terms to begin with, and not really genres.

To give you an example of a Moege, Hoshizora no Memoria -Wish upon a Shooting Star is one of the most known moeges out there. I personally think about playing it one day. :3 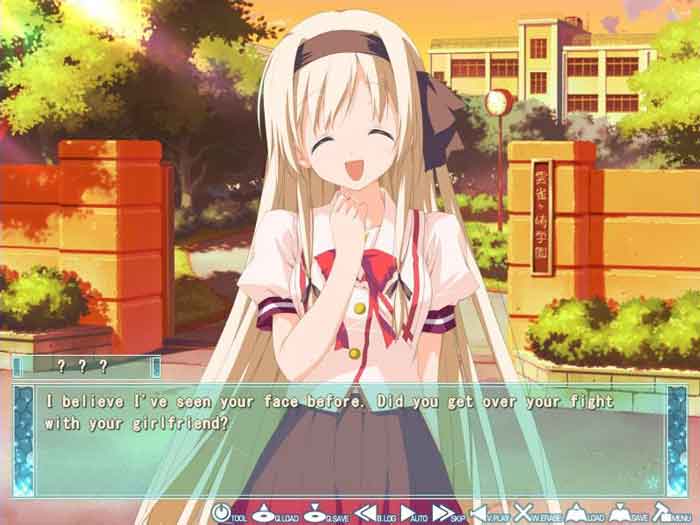 Yuki Koi Melt is an example of a more modern moege, it fits the genre perfectly in my opinion:- o(≧▽≦)o 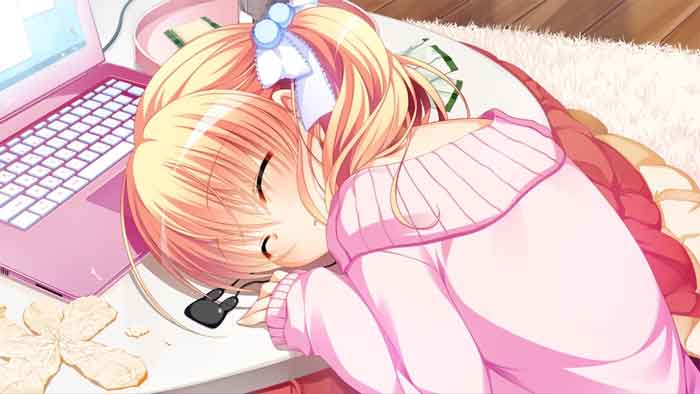 As the name implies, Plot focuses on the plot & action, and much less on the characters. Which makes it the opposite of Charage.

Because its definition is so generic, Plotge easily overlaps with many of the genres & tropes mentioned here. 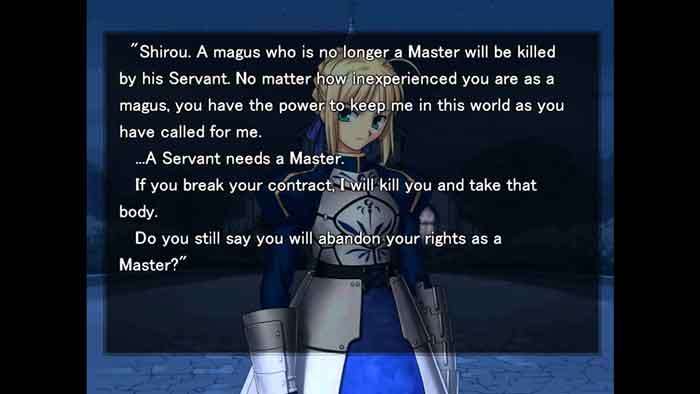 Chuunige (中二ゲ), or Chuuni game, is a very easy genre to get once you know what a Chuuni is. A chuuni, also known as ChuuniByou (中二病) or 8th-grade syndrome, is how some people role-play as some of their favorite games or Anime characters. It’s something we all did as kids, in some form in another. A chuuni is a person that still does that, even at a later stage of life. Pretending to be a criminal or having the evil eyes are two common examples of that. It’s called 8th-grade syndrome because that’s the grade it tends happens, although I think it can happens at different grades too.

There’s a very known Anime featuring Chuuni people called Chuunibyou demo Koi ga Shitai!, which I reviewed in this blog before., it’s a good way to understand what a Chuuni, and it’s a good Anime you probably should watch.

Chuunige is the visual novel type that features the stuff that would appeal to a chuuni, like superpowers & magical attacks. It also tends to feature all sorts of fights, and maybe mysterious organizations. Such visual novels can appeal to normal people of course, especially when they are done right.

Not to confuse you or anything, but Chuunige is also known as Moege (燃えゲ), which is a different word from the Moege (萌えゲ) I explained about.

Tsukihime is the visual novel that started the chuunige genre 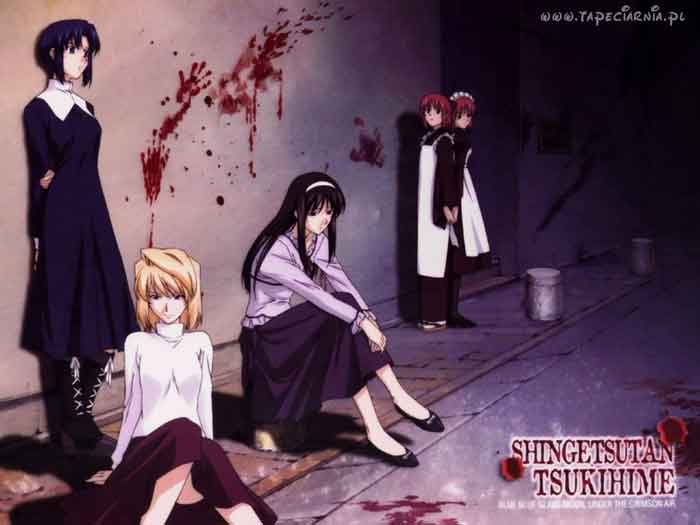 Fate/stay night is one of the most known Chuuni out there:- 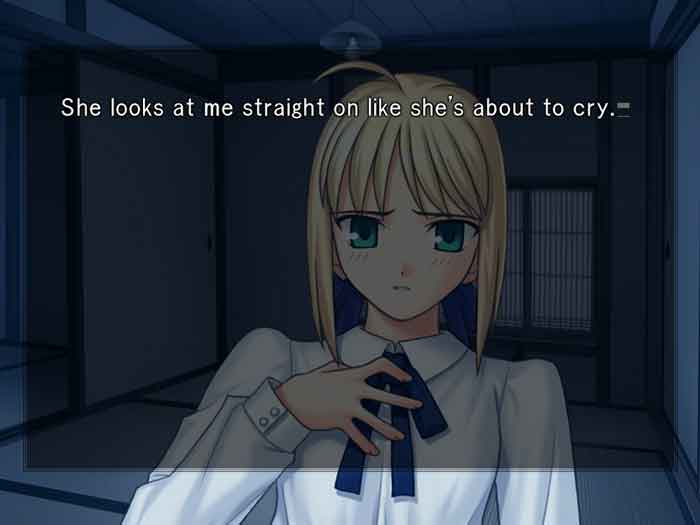 Dies Irae is a very known Chuuni that’s constantly mentioned & discussed in visual novel communities, and it’s considered one that represents the genre. 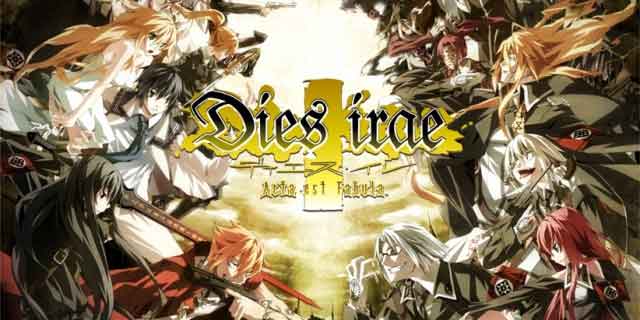 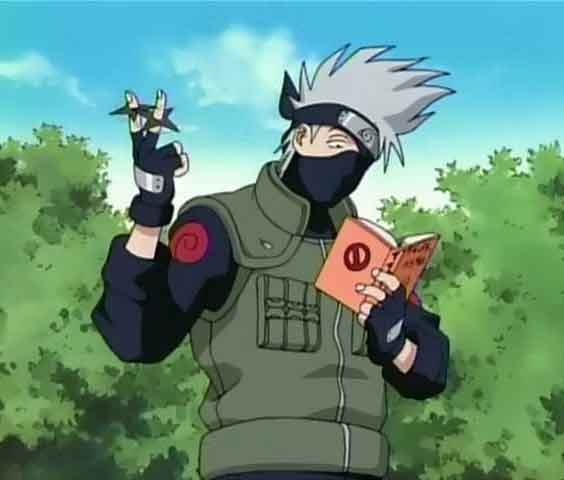 Ichaicha (いちゃいちゃ) literally means flirting or making out in Japanese. A visual novel of this genre simply features lovey-dovey couples doing exactly that. The genre is also called Rabu Rabu (らぶらぶ), which is a Japanese way to say (Love Love).

IchaIcha is also the name of a the series of books Hatake Kakashi likes reads in Naruto, which feature dating and lovey-dovey couples. 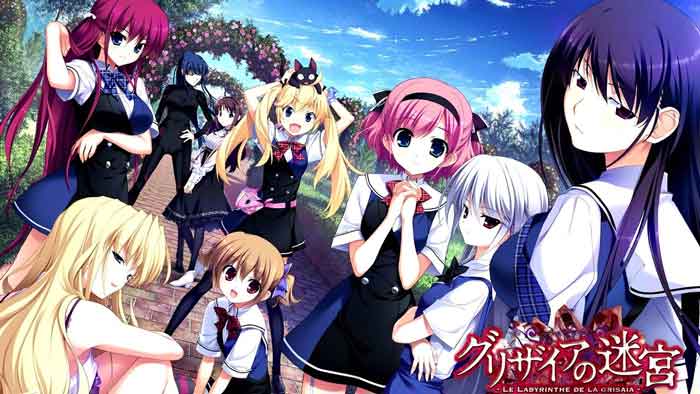 Kami (神) is the Japanese of “God”, and you would think such visual novel would feature a story about a god, but that’s not really the case. A visual novel is called Kamige if it was so great that it’s god-tier, or a masterpiece. This tends to be the case for super popular visual novels, whether it was because of sales, or because the community really likes it. 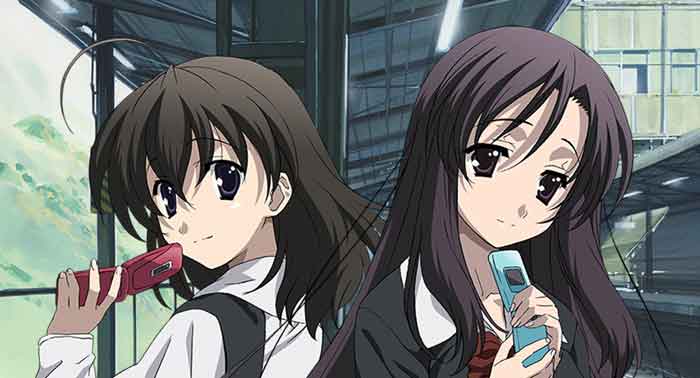 Kusoge （クソゲー）means “S*it Game”. This is the opposite of Kamige, and it’s used to describe terrible visual novels. Either because of its glitches, bad gameplay, story or all of that. It’s the epitome of a bad visual novel.

While I have criticism on some of the visual novels I played. I don’t consider any of them Kusoge, but some consider School Days to be one. 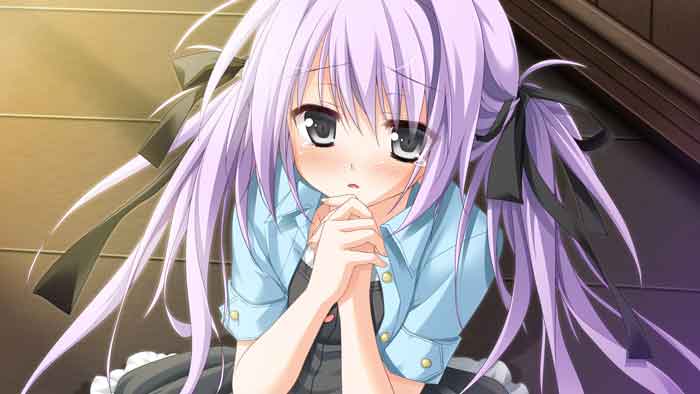 Naki (泣き) means weeping in Japanese, and so a Nakige visual novel are designed to make you cry, which may or may not work.

It tends features sad & melancholic story or events. Despite that, it tends to have happy ending. One can say that calling a visual novel a Nakige can be considered a spoiler. Which makes me hesitant to list examples of it here.

I will explain the difference between Nakige & Utsuge in the next section. 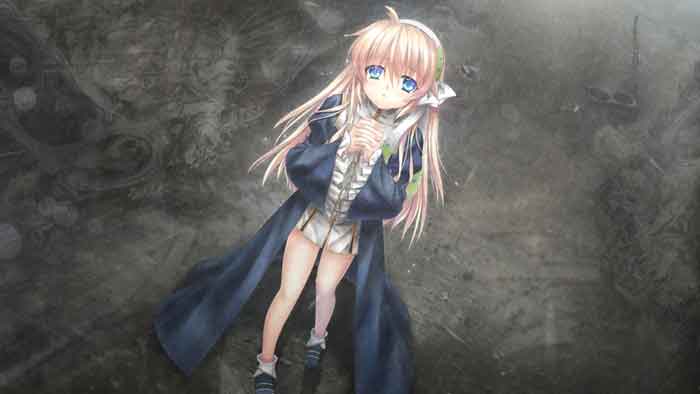 Utsuge (鬱ゲー), means a depressing, or low-spirited game. It’s a much more intense version of Nakige. Where the story features too much hardships, and very sad settings, including bad childhood, death, severe mental or social issues and any other depressing themes. 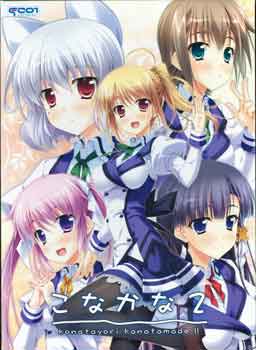 On the other hand, hard Utsuge goes all the way out. An example of that is Swan Song (see the image below). 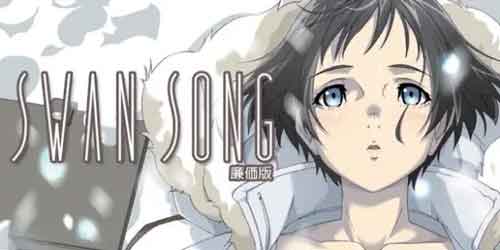 The main difference between Utsuge & Nakige lies in the ending. where it’s common for Nakige to have a happy ending, which causes you to feel catharsis after all the hardships the main characters have to go through. Utsuge doesn’t end that well. Of course, there are always exceptions to that rule, just like anything else mentioned here.

Some of the known eroges are “Grisaia no Kajitsu” & “If My Heart Had Wings”.

There are multiple ways to define the term “Loli” (which was derived from Lolita). It refers to the portrayal of a young girl in a sexual way. The term is used among Anime fans to describe any underage girl, including innocent and non-sexual ones.

A Lolige visual novel features underage girls, or lolis, and can have H-scenes and all. One could describe them as eroges visual novel, but with younger girls instead of grownup or teenage ones. (⁄ ⁄◕⁄‿⁄◕⁄ ⁄✿)

These Visual Novel Genres Overlap, And They Can Be Subjective 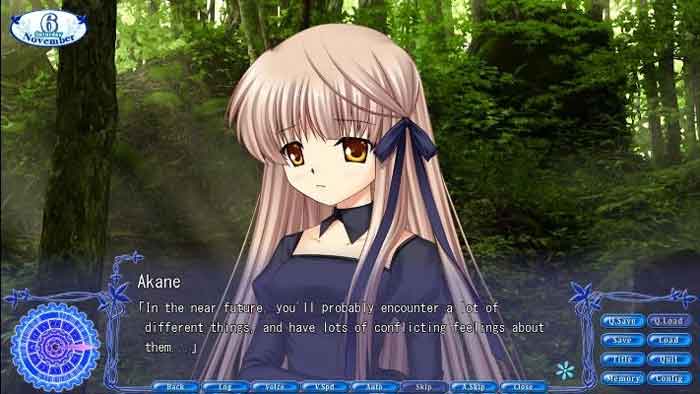 Generally speaking, these genres are very subjective, what you may consider a Kamige may be a complete trash in my opinion, going with the majority’s opinion can make things easier in many cases.

So, the point I am really trying to make is, don’t take categorizing visual novels into these genres too seriously. It’s not a science at all. o(≧▽≦)o

The -ge visual novel terms can be confusing at first, especially for those new to the medium. Many of these terms are easy to understand once you know how the term was coined, which makes them kinda obvious to Japanese speaker, but not to other people.

I hope you find my post useful, and I that I sincerely hope I managed to explain the various visual novel terms & genres, and in the most accurate way possible.