Yiynova MVP22U(V3) is another good way to get a Cintiq-like device for part of the price. It is similar to the other Cintiq Alternatives I reviewed before in more than a way, like how it comes with two pens (the two pens has different pressure curves), and how the screen size if as big as the Cintiqs multiple times its price. While Yiynova MVP22U(V3) doesn’t have some of the additional features Cintiq has like tilt sensitivity, but it still provides you with a great way to draw directly on screen.

Yiynova MVP22U(V3) can’t be used with Wacom devices on the same computer, as you will have to remove their drivers or they will conflict with it.

As long as you don’t mind the cons I mentioned about Yiynova MVP22U(V3), then you are going to like this device.
#CommissionsEarned 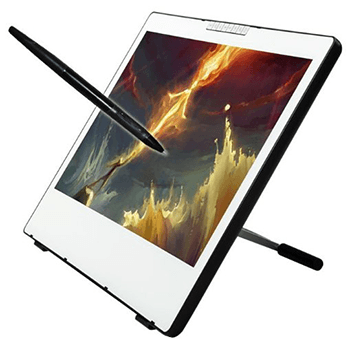 For a relatively low price, MVP22U(V3) will provide you with a 21.5 screen drawing screen, which is generous if you considered how the equivalent bigger Cintiq costs. The screen provides a good picture quality as well, and it is big enough to draw comfortably with, and have an experience close to what you could do with traditional drawing media.

The glass screen surface of MVP22U(V3) is smooth, this can be a good or bad thing depending on your preference, as some artists like to glide their pen on the surface, while some others want the surface to be textured to be similar to traditional media. In case you are among the latter, you can add texture by adding a screen protector or something. One disadvantage of glasses screen that they reflect light & act a mirror if it fell directly on it, so you may want to consider this based on how your workspace is like.

When it comes drawing capabilities, Yiynova MVP22U(V3) supports 2048 levels of pressure sensitivity. If you are new to digital art, it is a feature that allows you to get thinner or thicker lines based on how much you press while you draw your lines, just like traditional pencils. 2048 levels is more than enough for most uses, even if the actual sensitivity was around 1024 or something, it is still more than enough, so there is no need to stress over this when getting a pen display, a mistake a lot of newbies in digital graphics tends to fall into.

Just like the case with many Wacom Cintiq alternatives, Yiynova MVP22U(V3) supports no tilt sensitivity, which varied the lines based on how you tilt the pen, a feature many artists don’t use at all, but for some, it could be a deal-breaker. If you are new to digital art, you don’t need to worry about the existence of this feature. Especially giving how much you will have to pay to get a Cintiq that actually has this.

Based on the above, the screen gives you an ideal way to draw directly on screen, without some of the bells & whistles the Cinitq has, which is more than enough for many people. But it would have been nice if it also supported touch gestures and the likes. Something I hope to see in a future version of this pen display. :> 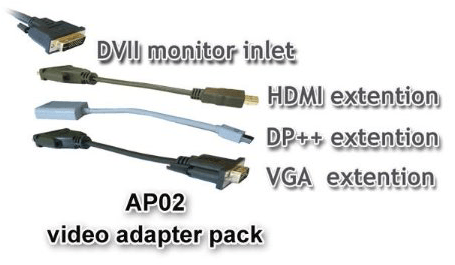 One of the bad things about the DVI cables is that they come hard-wired to Yiynova MVP22U(V3), which is not good in case something happened to them. That could be forgiven if you plan to place your Yiynova MVP22U(V3) and not move it often. A good design choice is how the cables come out from the side rather than the bottom, a problem many Cintiq Alternatives suffered from.

There are 8 customizable buttons on the top of Yiynova MVP22U(V3), the placement of these buttons looks weird, as I am yet to see hot keys on that place. Something that may stop some artists from using them. The buttons are solid, the buttons can be customized to do keyboard strokes to do the things you commonly use in your art applications.

When it comes to the supported art applications, Yiynova MVP22U(V3) works with many of them, like Photoshop, Corel Painter, Sketchbook Pro, and even more. If you have any Wacom driver installed on your computer, you better remove it completely, or else it is likely going to conflict with Yiynova MVP22U(V3)’s driver. This is a common problem with many non-Wacom products.

Yiynova MVP22U(V3) has a pretty good pen tracking, you may face parallax at around the edges of the screen, which is a misalignment caused by the distance caused by the screen glass, calibrating your display can mitigate that problem, but it won’t totally end it. Because you are going to draw at the middle of the screen most of the time.

Yiynova MVP22U(V3) comes with two pens, which are called P2X & P2H. Each of the two pens has a different pressure curve, P2X requires you to press harder to reach the max sensitivity, while P2H requires less pressure for that.

None of the pens has no eraser at the back of it, something you could miss if you came from a Wacom graphics tablet, but you could easily get used to the lack of it, especially if you realized how fast you could switch between the brush & eraser tools by assigning a hot keys to it or using the keyboard.

The pens buttons can’t be customized much, you can make the button toggle between the eraser & the brush tools, or make it trigger a mouse click (right-click, left-click, middle-click etc). But nothing more, it would have been nice if you could program them to do Undo/Redo at least. While the upper hotkeys above Yiynova MVP22U(V3) can be customized much better, I still have my doubt they will be used (I could be wrong though).

Yiynova MVP22U(V3) comes with a normal stand that allows you to tilt it forward & backward, but it doesn’t allow you to swivel or rotate it or anything fancy, this is fine in case you lean on it. In case you want more flexibility, it also supports 75 X 75 VESA mounting, which mean you could attach an arm behind it, something that gives you more flexible movement to adjust it based on how you are sitting, down, including allowing you to draw while standing up, something many artists like to do (this depends on your height & how much the arm can be extended).

MVP22U(V3) is another likable pen display & Cintiq alternative that can aide you in your journey in digital art, while many of the features it provides are standard to the similar pen display at the price range, it is a very viable option if you want an affordable way to draw directly on a computer screen.

I hope you liked my Yiynova MVP22U(V3) review, and see you again in another review. ^^