Da Vinci 1.0 is a good choice for first time 3D printing users. It is pre-assembled 3D printer, so you won’t need to assemble it yourself or anything. But there is some adjustment & calibration needed before you could do so. it supports both PLA & ABS filament, which are the most common filament types out there.

Bear in mind that Da Vinci 1.0 only supports proprietary filament from XYZPrinting, so you won’t be able to use any 3rd party filament out of the box. This can increase the cost of owning this 3D printer over time. But given the hacking community for this printer, you will be able to get around this. But there is risks behind that. 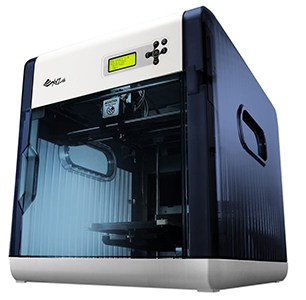 Da Vinci 1.0 is a big 3D printer, it comes in blue & white or blue & grey color sets, the former looks more beautiful in my opinion. There is a big glass door on the front, as well a cover on the top, which both allow you to access the printing area to take your printed object, or to tweak & calibrate it when needed.

There is a green LCD screen on the top right of Da Vinci 1.0, the LCD shows all the options to adjust the axis or to load & unload filament.

Even when you don’t have to assemble your Da Vinci 1.0 printer, you still need to do some tinkering to it. The tinkering includes calibrating the axis & making sure to clean the printing extruder when it gets clogged. While tinkering is the name of the game for 3D printing. I really hope that will change in the future, and that someday I will read this article & smile on how things used to be :>

While it is outside the scope of this review to give you full instructions on how to set your Da Vinci 1.0 printer up, I will give you an idea on how things are going to be.

After you unpack your Da Vinci 1.0, you will need to remove the tapes & packaging support inside of it, the manual has instructions on how to do that.

After that, you will need to calibrate your printing bed. The user manual tells you not to do that, as it comes pre-calibrated, but there is a good chance you will need to despite that. As the calibration could be ruined during shipping.

Da Vinci 1.0 features auto-leveling feature, which would have been nice if it worked as it supposed to be. You will pretty much need to do that manually. Check out this link for good instructions on how to level your Da Vinci 1.0 printing bed.

The printing quality you get from Da Vinci 1.0 is rather good, especially if you took the price of the 3D printer into account. The large printing area of Da Vinci 1.0 means you can print bigger objects, however, the printing bed only takes a portion of the internal area, or around 7.8 x 7.8 x 7.8 inches.

Da Vinci 1.0 is a quite noisy 3D printer, so you better place it in a room where not many people could hear it.

Using downloaded 3D models from the Internet (which comes in .stl files) may not work as expected, this could be caused by errors in the file. There are more than one way to go around that. For one, you could use NETFABB Cloud Service, which is a free service sponsored by Microsoft. All you have to do is to upload the .stl file and it will fix it for you. NETFABB supports other file formats like OBJ, 3MF & VRML.

Da Vinci 1.0 features autocleaning feature. Inside Da Vinci 1.0, and on the top-right side of the printing area, there is small box where the extruder nozzle cleans itself. To do that, the extruder simply throw some filament there before printing.

In 3D printing material to stick to the printing bed is important to ensure the print is held in place & done nicely. And for that, it is common to apply some sort of material to help with that, like glue, hairspray or kapton tape. And for that Da Vinci 1.0 comes with a glue stick to help you with that.

When it first came out, Da Vinci 1.0 only supported ABS filament, but not it supports both ABS & PLA filament. As for what are these materials, they are two common types of 3D printing materials. There are many differences between the two. But in short,

ABS tends to smell like hot plastic when it heats, and requires more heat to melt. That means you will need a heated bed to support, Da Vinci 1.0 has that. ABS is harder to break than PLA. Which makes it a better choice for many applications.

On the other hand PLA smell much better when it is heated. It is made of corn starch, so it is very environmentally friendly. PLA filament requires much less heat to melt than ABS, so a heated bed is not a must to use it. PLA is slower to cool down, which is extruders are equipped with a fan to help cooling it down faster.

Now, there are tricks the hacking community came up with to go around this problem, which are pretty nice. But there is a risk of voiding your warranty or even bricking your 3D printer, so be careful about doing that. But having those is much better than not having them at all.

There is one little problem with the SD card slot:- it is directly on the motherboard, which makes it a bit of a hassle to reach. Which is why I advise you to get yourself a SD card extension cable. Which makes things easier, as you can see in Daniel Valdez’s video below:-

Da Vinci 1.0 comes with XYZWare, which works fine. But it is a very limited compared to other 3D printing software. It gives you the ability to rotate, resize & move your object around before printing. But it doesn’t allow you to change the bed or extruder temperature, something you will be willing to play with once you get versed in 3D printing.

If you are a fan of other 3D printing software, you can open your model in another software, like Slic3r. And then save it to .stl format & print it via XYZWare, that won’t solve all your problems. But it is still something.

One of the greatest things about Da Vinci 1.0 is the good community of modders behind it. Not just you can hack your Da Vinci printer & make it use a different filament. But you can also change the firmware, and mod your printer so that you can control things like the extruder temperature and so on. Just like I said when I talked about the proprietary filament, do that at your own risk. If you know what you are doing, then it is pretty great way to use your Da Vinci 1.0.

Da Vinci 1.0 is another good affordable 3D printer, it doesn’t come without its own set of limitations & problems. But it is a good way to start out with this good world of 3D printing. The property filament may make owning this 3D printer pile-up over time, but if you don’t plan to print many objects. Then this won’t be much of an issue.

I hope you liked my Da Vinci 1.0 review, and see you again in another review. ^^