XP-Pen Artist10S is the smallest XP-Pen pen display from their lineup. The thing you can’t beat it about is the price. The resolution is okay, the small size of it makes it easy to carry it around. The lower pressure may sound like XP-Pen Artist10S is a worse drawing device, but it’s really more than you actually need.

There are 6 hot keys for you to customize to different shortcuts. There are also 2 buttons on the pen for that, but you can only choose from few pre-defined functions. Other drawing devices allow you to define any shortcut you want for the pen keys.

XP-Pen Artist10S doesn’t come with a stand, as it seems like it’s intended to be used while having it on your lap (and to lower its price as well), but you can get a stand separately if you want.

The ability to power XP-Pen Artist10S from USB port means that you could take XP-Pen Artist10S with you on the go and power it from your laptop (assuming the USB port on your laptop can provide enough power to it). The drawing glove makes it easy to move your hand around the screen, and without smudging it.

In case you decided to buy XP-Pen Artist10S, there are 3 things to take into account, which are the parallax, possible driver issues, and the limited way the pen buttons can be customized. If you’re fine with these, then XP-Pen Artist10S is good for you.

To check XP-Pen Artist10S’s price & to buy it, kindly check it out in the following Amazon links (I included the recent version I found in the different stores)

Very small & portable, and can be taken anywhere easily.

XP-Pen Artist10S’s screen has a resolution of 1280 X 800, which is a bit low, but considering the small size of it, it’s okay for drawing draw. You could get used to it eventually. If you plan to use it as a second monitor, you could use your main monitor with its native resolution when you set it to “Extended Mode” in Windows. The drawing area can be a bit small for some artists, but it’s good for sketching and the like (you may still want a larger drawing area if you are really used to that, like in case you draw with your arm).

On one side of the cable, there’s USB-C to plug right into XP-Pen Artist10S, on the other side, there are 3 parts, HDMI to connect it to the display port, a USB to connect it to your computer, and a red USB plug, which is where XP-Pen Artist10S gets its power. If your computer can supply enough power to it, you won’t need a power outlet for that, and you could use it alongside your laptop on the go. Plugging the red USB to the wall is an option if your computer can’t supply enough power.

Since you need a HDMI & at least one USB port to use XP-Pen Artist10S, you may need to buy an adapter if your computer doesn’t have that port. Owner of newer Macbook Pros will need to get some dongles to use it. You can’t use XP-Pen Artist10S with a USB-C to USB-C cable, this is a common assumption people make about XP-Pen Artist10S (see the picture below). 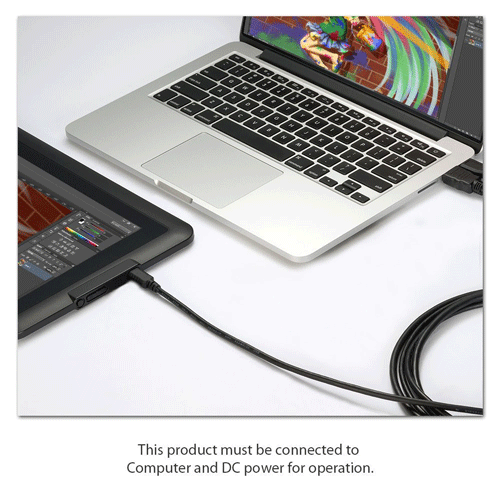 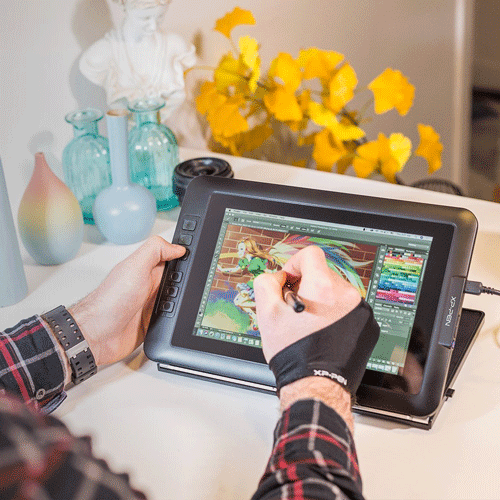 XP-Pen Artist10S supports 2048 levels of pressure sensitivity, this is more than enough pressure to draw to your heart content. You may be tempted to think that higher pressure means better drawing experience, but that’s not really the case. You will be able to vary the size & opacity of your brushes with just 2048 levels just fine.

It doesn’t support tilt sensitivity, which allows you to tilt the brush you’re using (assuming the brush & drawing application supports it), this is a secondary feature, so I wouldn’t be worried for not having it here.

Parallax, And Some Tips On How To Deal With It

Parallax is one of two issues that you need to know about when getting XP-Pen Artist10S. Parallax is an offset between the pen tip and the cursor on the screen. Parallax makes it less intuitive to draw with a pen display. Calibrating the pen using the driver makes the problem less obvious. There are two calibration options in the driver, 4 points calibration, and 9 points. Calibrating while holding the pen perpendicular to the screen is what XP-Pen advises you to do, but you could also hold the pen the same way you draw with during calibration to see what works better. Even with slight parallax, you will get used to it after some time.

If you plan to use XP-Pen Artist10S as a second display in duplicate mode, then both screens need to be set in the same resolution, or else you may get a lot of parallax.

There are 6 hot keys on the side of XP-Pen Artist10S, these keys could be customizable to do all sorts of shortcuts. The driver software allows you to do more than just keyboard shortcuts, like different mouse clicks, play/pause music, run a certain application or to go to a certain website, and more.

XP-Pen Artist10S’s pen has two buttons on it, which you can only customize them to do specific functions. Unlike the hot keys. which you could customize in many ways. I really wonder why you can’t do that with the pen buttons? This is something pen buttons in other brands can do easily. I really hope XP-Pen to fix this issue with an upcoming driver update.

The pen doesn’t require a battery or recharging, as it takes the power from XP-Pen Artist10S itself. XP-Pen is the only brand I am aware of that provides such pen (other than Wacom).

There’s no eraser at the back of the pen, but you could set on of the two pen buttons or one of the 6 hot keys to compensate for that.

Besides the pen, you get a pen holder to place the pen on when you’re not using it. Inside that holder, there are spare pen tips (called nibs) to replace the existing one when it gets pointy. Something you may have to do to avoid scratching the screen surface. For more information on how much nibs could last, check out my post How much Wacom nibs lasts? And how to make your graphics tablet nibs last longer. The post is mostly about Wacom tablets, but the things I mentioned in it apply to other brands too. There’s a little remover to remove the nibs from the pen easily too.

One of the things I like about XP-Pen is the fact that their pen replacements & nibs are very cheap. One of the cheapest in the market too. 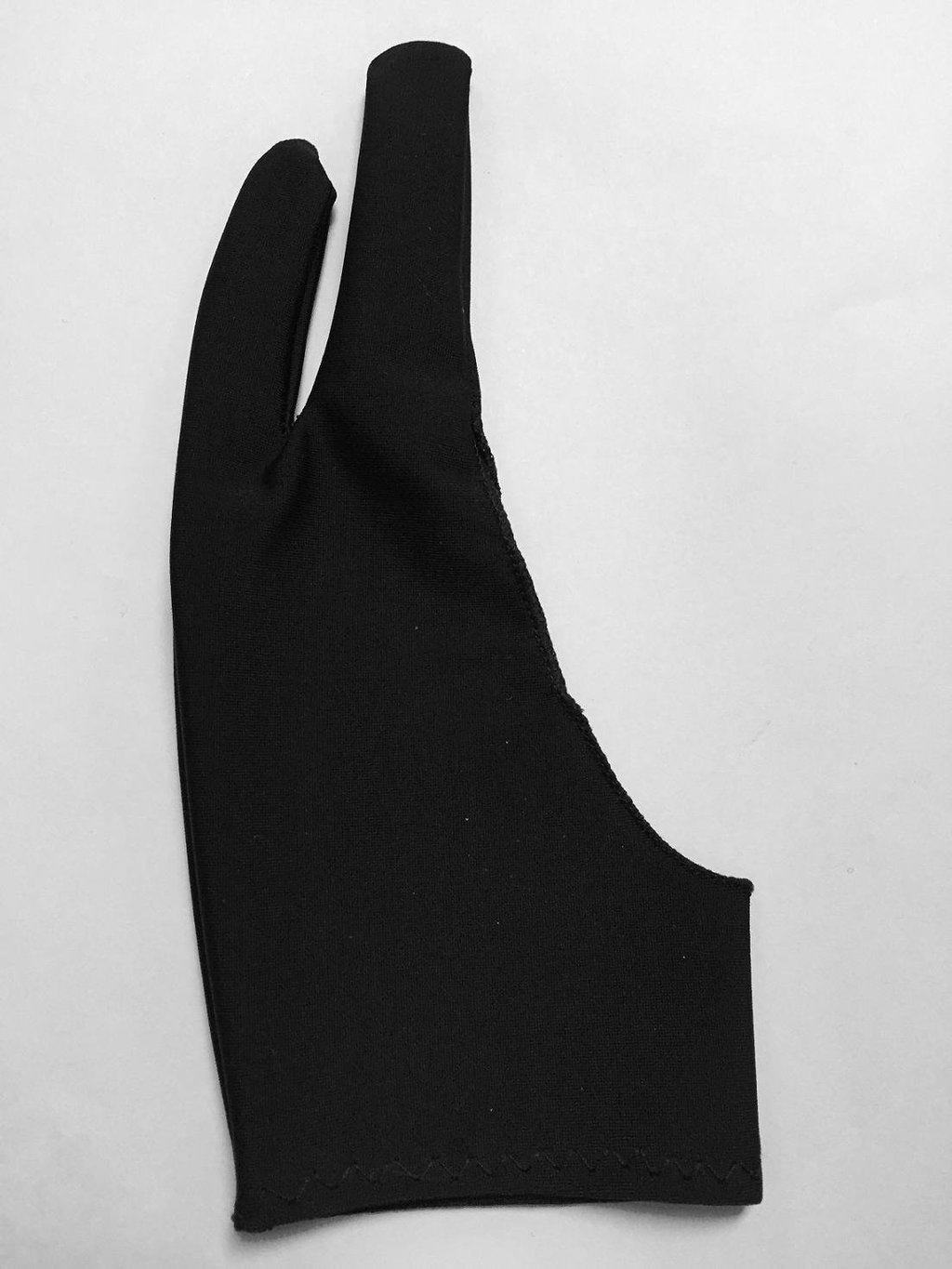 XP-Pen Artist10S comes with a drawing glove, this type of gloves comes with many graphics tablets & pen displays from Wacom competitors, and it looks similar to the one you see in the picture above. This glove hides the bottom part of your hand, to make it easier to move your hand around the screen area, no matter what’s the state of your hand is.

XP-Pen Artist10S comes with no stand, which could explain its good price to a degree. Not having a stand is not an issue in case you plan to use it on your lap. Giving the small size of this device, you could get many stands to work with it, as well as XP-Pen’s own stand.

As far as I can tell, XP-Pen Artist10S doesn’t support any kind of VESA mount. Giving the small size of it, most artists won’t think of mounting it to an arm. I tried looking for an adapter kit that supports 10-inch screens, but I couldn’t find one so far.

Rotating The Screen For Left-Handed People 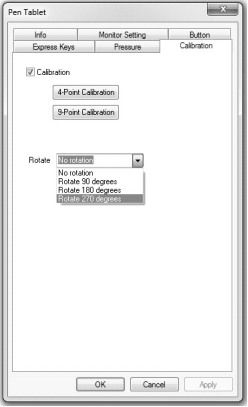 The driver allows you to rotate the screen, which is useful in order to have the hot keys on the right side of the screen, something you would want to do if you’re left-handed.

Besides parallax, driver installation issues are the one thing you need to be prepared for in case you decided to buy XP-Pen Artist10S. While you may be lucky and the driver will work right away, following some tips can help you avoid many problems you could face down the line.

Remove Wacom Drivers From Your Computer

This is an advise I always give to people in this blog. You will find people giving this advise around the web as well. You need to remove any Wacom driver from your computer. Removing drivers of other graphics tablets or pen displays is also good. This is to make sure there are no drivers conflicts here.

While you get a driver in the CD that comes with XP-Pen Artist10S, you can also download the latest driver from XP-Pen’s website. It’s advisable to try the driver in the website first, but there are times where the one in the CD would work for you. So try both starting from the one from the website, to see which one works for you better.

A Final Word On XP-Pen Artist10s

XP-Pen states that XP-Pen Artist10S is aimed for beginners, the affordable price can sure make it easy for artists that don’t make money from their art to get their hands on a pen display. As long as you’re fine with the limited pen buttons customizability, parallax, and you’re ready to tackle installation problems, then I totally advise you to get XP-Pen Artist10S.

I hope you liked my XP-Pen Artist10S review, and see you again in another review. ^^

To check XP-Pen Artist10S’s price & to buy it, kindly check it out in the following Amazon links (I included the recent version I found in the different stores)