MobileStudio Pro is a great device for drawing & designing, both on-the-go or to work on a desktop (though there are other options for that if that’s all you want to do). it is responsive and doesn’t have much lag when you draw with it. It is very nice to see Wacom improve on its products, like how they improved on the parallax problem, offering a larger screen size like 16-inches is another welcomed sign.

I am honestly not sure how the additional pressure sensitivity in the pro pen 2 would be good for drawing, so I wouldn’t recommend it over any competing product for just that.

Just like the Cintiq Companion 2, you can use MobileStudio Pro in Cintiq mode, just like any regular Cintiq. That way, you could take advantage of your more powerful PC or Mac. The new pen holder makes it easier to carry it around, though I am not much in favor for the stand, which is optional for those who wants it.

Having a 16-inches models is going to be very convenient for many artists, while having Quadro graphics cards in the larger models makes it more suitable for CAD applications.

This is a first look review, I will update it once I got more experiences from real users in the future.

After two iterations of Wacom Cintiq Companion, which applies a very good concept that allow you to draw on the go, but had suffered from few problems, like the lack of Cintiq mode in the original Cintiq companion, or the loud fan noise in the second one. This time, Wacom is releasing new devices that follows suit with those, with a different name, and hopefully with much better experience for artists. 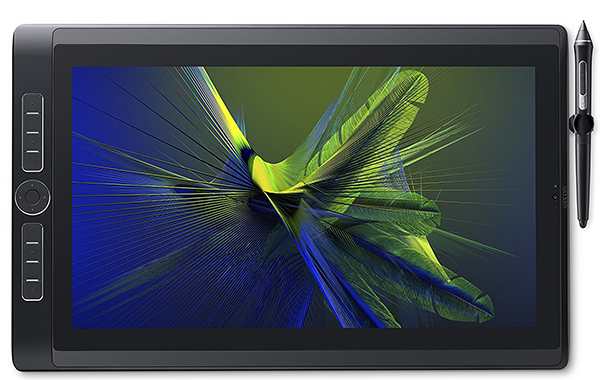 MobileStudio Pro has 6 ExpressKeys & rocker button (the 16 model has 8 keys). Expresskeys is something that distinguished the Cintiq Companion from the Surface Pro line of tablets from Microsoft. In my opinion, it makes drawing on the go easier, even though it probably can’t entirely replace the keyboard for many people.

MobileStudio Pro features a 8192 level of pressure sensitivity, the highest ever. If you are a regular reader of this blog, then you know that I was always skeptical of weather you need more pressure sensitivity more than 1024 or even 2048, let alone 8192. While it is nice to see that Wacom is advancing the technology, this is not the feature you will mainly use to make your purchase decision.

Parallax is an issue that has always been there in Wacom products, where there’s a cursor offset near the edges of the drawing area. Many people complained over parallax on Wacom devices over the years, it never made the device unusable or anything, but it is an area where Wacom’s competitors are doing better. It seems like Wacom has improved over this issue. Thanks to the low space between the pen and the digitizer, you won’t get much parallax with MobileStudio Pro.

One of the things I hope to see in MobileStudio Pro is whether they solved the loud fans problem that existed in Cintiq Companion 2, something many artists disliked about. There were many tweaks that could reduce this problem in the Companion 2, but it is way better to have this problem solved out of the box, as it greatly affecting the drawing experience for many.

The 13 model of MobileStudio Pro comes with Iris 550, a GPU that has good power consumption. In case you are wondering whether this graphics card is suitable for designing or not, the answer depends on the art program you are using. You will be okay with art applications that depends on CPU only, and the ones that depends on GPU to some extent, but in the applications that requires a discrete GPU, you may get a performance hit. Since you will most likely use MobileStudio Pro to work on the go, this may not be a big issue for some people. In general, it sounds good for drawing & painting~

On the other hand, the 16 model of MobileStudio Pro has Quadro graphics card from Nvidia, with 2 GB or 4 GB options, depending on the model you pick up, which make it more suitable for running higher-end applications that requires a GPU, like CAD applications. That’s especially the case with the larger 16-inch screen size the models have.

Since none of MobileStudio Pro models have a GeForce graphics card, the old GeForce X Quadro debate doesn’t apply here, this could change in case Wacom ever released MobileStudio Pro with such GPU.

Expected battery life for MobileStudio Pro is up to 6 hours, according to Wacom. The battery life you are going to get depends also on your configuration, like the screen brightness and the load on the CPU.

MobileStudio Pro comes with the new Pro Pen 2, which doesn’t require battery, just like the case with all the other Wacom pens. The pro pen 2 offers more pressure sensitivity than its predecessor, or 8192 levels to be exact.

It comes with pen case with 3 replacement nibs( 2 standard & 1 felt), nibs that looks quite different than the traditional Wacom nibs. The pen also comes with color rings to customize the look of your pen, pen holder and the nibs removal tool.

You can attach the pen on the side of MobileStudio Pro, so that carrying it around would be easier. The pro pen 2 Comes with 4 color rings so you could customize your pen to your liking.

The Stand & Other Additional Features

The optional stand for the MobileStudio Pro is similar to the one for Wacom Cintiq 13HD, and it is sold separately. It allows you to set your MobileStudio Pro to one of few positions. It would have been nice if Wacom adapted the continuous stand used in Microsoft Surface Pro now, and it would have been nice if Wacom improved a little bit on the stand, but that’s okay.

MobileStudio Pro comes equipped Intel RealSense 3D Camera, which allows you to capture real-life objects, and turn them into 3D. Some of MobileStudio Pro models, like the 13-inches i7 512GB, comes with 12-months license of Artec Studio 11 Ultimate scanning software, which is compatible with SolidWorks CAD & Design X.

You have the option to get the same Wacom wireless keyboard that was available for Cintiq 27QHD, which could be useful for working on the go, though I think any compact keyboard you own would do personally.

MobileStudio Pro adopt the USB C standard, instead of the regular USB. So to use your regular USB devices, you need an adapter for that.

There are 6 configurations for MobileStudio Pro, 4 for the 13-inches model, and 2 for the 16-inches one.

The 13-inch models are all the same, with the difference in the amount of memory you get, and whether you get an i5 or i7 processor. The graphics card for all the models is the same Intel Iris 550.

It is worth noting that the 13-inches i7 512GB, comes with 12-months license of Artec Studio 11 Ultimate scanning software.

To make it easier to compare the different models, I made a table with the specifications below.

Note:- Bear in mind that the operating system takes some of the storage space mentioned above from your MobileStudio Pro, so get the model that gives you enough for your needs while taking that in mind.

Hand On Video For Mobilestudio Pro

In this video Jason got his hand on MobileStudio Pro, and shows you one of them, along with the pen, how it looks like, and many other things

Here are some of the issues for the MobileStudio Pro, you could see a full list here in this Reddit post. Since it is the newest product among the 3 I am comparing here, I hope these issues will be solved by Wacom in the future.

Credit for the video to:- HappehLemons

So far, MobileStudio Pro is a nice drawing device on the go. It was very nice to see the improvements Wacom has made to the device compared to Cintiq Companion 2, like the improved parallax & the increased pressure sensitivity. The adoption of 3D could provide a good potential for creativity for artists too.

I hope you liked my MobileStudio Pro review, and see you again in another review. ^^