Wacom Cintiq 13HD:- The Dream Of All Us Artists

The Cintiq is the dream of any digital artist. Who among us wouldn’t want to be able to draw directly on the screen. And with a great accuracy. While using the best and most trusted pen display available.

While there are many great options from Monoprice like the Monoprice 19-inch, and some others from Yiynova, like the Yiynova 19-inch. Both of those provide a subset of what the Cintiq can do for you. With the Cintiq, You won’t just get a the best screen available for a pen display. But a greater accuracy. More accurate than any regular graphics tablet you will ever get. It will up everything for you when it comes to your digital art.

The Wacom Cintiq 13HD has 2048 level of pressure sensitivity. Which is a standard in today’s graphics tablets and pen displays. Pressure sensitivity is what allows you to vary the width or opacity of your lines by applying more pressure on the tablet surface.

The Cintiq 13HD is small enough that you can put it on your lap. As long you make sure the cables won’t get in your way.

There are 3 cables you have to attach to the Wacom Cintiq 13HD. USB, HDMI and Power cables. The Cintiq comes with a 3-in-1 cable than contains all the 3. The Cable is smaller than the one that came with the Cintiq 12. Which makes it more convenient. But keep in mind that sometimes one of these 3 cables can gets wobbly. Which causes the screen to go all black for you. So you better be careful with that if you placed this Cintiq on your lap :D

One of the things I like about the Cintiq is that the stand rotate in 3 ways. As opposed to the one way the stand moves in the other pen display (Like the Yiynova MSP19U+). While that is a good thing, there is a chance you won’t like the stand much, as it won’t feel like it stays in its place. So be prepared for that. Wacom Cintiq 13HD has a 1080p display, with the standard 1920 X 1080 resolution. Which is higher than all the non-Wacom pen displays I reviewed before.

The screen is so responsive. And there is a little chance you will feel any lag while drawing with it. Kudos for Wacom for that. The screen is bright it looks sharp and good. Though it is not exactly as bright regular LCD monitors.

Just like the Monoprice and the Yiynova pen displays I reviewed before. The Cintiq has a slight Parallax problem near the edge of the screen, thought that is unlikely to stop you from benefitting from the tablet.

The main gripe you may have about the screen of the Wacom Cintiq 13HD is that the chance of it getting scratches from drawing on it after some time. Something many owners of the Cintiq complained about. While many others said that it doesn’t scratch that easily. In case you are afraid about scratching your screen You can take some precaution and get yourself POSRUS Antiglare Touch Screen Protector for Wacom Cintiq 13HD. Which will help you protect your previous Cintiq screen. As illustrated in the video in the post I linked to just now :D

The Lack Of Touch Feature

While you can draw on Wacom Cintiq 13HD directly using the Pro pen that comes with it. You can’t interact with the screen using your fingers. As the Cintiq has no touch capabilities at all. This is not the case for the bigger and higher end of the Cintiq. Chances that Wacom will eventually add touch feature to all of its pen displays. Just like it did with most of their regular graphics tablets.

Update:- Wacom did release a new Cintiq 13HD with touch. Which is a bit pricier than this one reviewed here, which I have reviewed as well.

The Wacom Cintiq 13HD has 4 square buttons a rocker d-pad with rocker buttons in it. Which seems like a step backward for Wacom. As rocker buttons like that are inferior to the ring. As tasks like zooming or changing the brush size are much easier to do using the ring than rocker buttons. This is a minus for the Cintiq for those who are used to the ring from the other Wacom tablets, me included.

The Wacom Cintiq 13HD pen comes in an elegant Magnetic latch case, which is a pleasure to look at and open in its own, inside the case, there are 9 replacement nibs & colored rings so that you could customize the pen look to suit your taste.

Just like most of the graphics tablets these days, the pen has two buttons you could customise. The pro pen itself is more elegant than its Intuos counterpart as well, with its greyish look and all.

Should you get a Wacom Cintiq 13HD or an Intuos Pro? 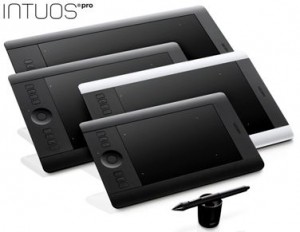 There is a chance you may be wondering:- Should I get Wacom Cintiq 13HD and have the device of my dreams? Or should I save a huge sum of money and get an Intuos Pro?

The short answer for this is:- Get the Cintiq, as you will pretty much like it. It relates to real drawing more than the Intuos pro. When you draw with the Cintiq, there is no disconnection between what you see and what your hands does. Though I am not saying that you can’t achieve much using an Intuos. But the Cintiq will make you more productive, and it will up everything when it comes to your art level, including your art itself

Not that I want to appear self-contradicting or anything, but despite everything I said, there are cases where getting the Intuos Pro is still better. Like if you are new to digital art, where it may not be wise to spend around $1000 dollars for a device you may not use that much. Or you will most likely need when you become good at digital art. Something that may take years to happen, if you are like that, then I suggest that you get yourself an Intuos Pro. And after you become very good at digital art, get yourself the latest Cintiq available at the time. Which is likely to be better than the current one I am reviewing here.

If you are interested, check out my Intuos Pro review here.