Wacom Cintiq 13 Pen and Touch is the newer model of the Cintiq 13HD, but with touch gesture, which gives you the ability to use the pen display without the need of the pen is the main new feature in it, something that can be very handy for your productivity, especially with the new screen-controls that comes along with it, a nifty feature allows you to change the brush size or zoom using soft touch stripe, as well as 8 soft buttons that you can access all using your fingers.
In case you don’t want touch, or want to save few bucks and get the Cintiq for cheaper, it may worth it to check out the previous Cintiq model. Which have similar features, like the 2048 level of pressure sensitivity, the HD screen, the 3-to-1 cable. And the pro pen with 9 replacement nibs.

Wacom Cintiq 13 Pen and Touch is a new version of Wacom Cintiq 13HD, which did not have any touch feature, but still was a great creativity tool otherwise. If you are interested to know about the previous model, read my Cintiq 3h HD here.
Besides the touch feature, which I talked about below, the specifications of Wacom Cintiq 13 Pen and Touch is quite the same as the previous model of the Cintiq. The pressure sensitivity of this Cintiq has stayed the same as the original one, which is 2048, and the tils sensitivity is still ±60, which is a feature that detect how the pen is tilted, and thus change the shape of the stroke, which is different from a brush to another.
Wacom Cintiq 13 Pen and Touch still offers HD display with 1920 X 1080 resolution. which you may consider lowering so that icons and other things can become bigger on your screen. It is also worth to note that the Cintiq screen has no glare in it, which is important feature which prevents the light from reflecting off the screen, making the screen look like a mirror (and you end up seeing yourself on it rather than what should be displayed).

Wacom Cintiq 13 Pen and Touch comes with 3-to-1 cable, where one side of the cable plugs into the Cintiq. And the 3 parts on the other sides plug into the USB & HDMI ports of your computer, and power source respectively.
Since the display interface of the Cintiq is HDMI, you will need an adapter in case you are using a mac or a computer that doesn’t contain a HDMI port. You will need to get an adapter in additional to your Cintiq, which is a litre annoying in my opinion.
To make it easier on you, I made links for all kinds of adapters Amazon searches for you so that you won’t have to look for one :-
When I reviewed the original Cintiq, I stated how the cable was not very stable on the Wacom side, and unfortunately, this problem has not been solved with thaws new model, which is a shame. This shouldn’t deterring you from getting Wacom Cintiq 13 Pen and Touch at all, but it would be much better if this problem has been solved. 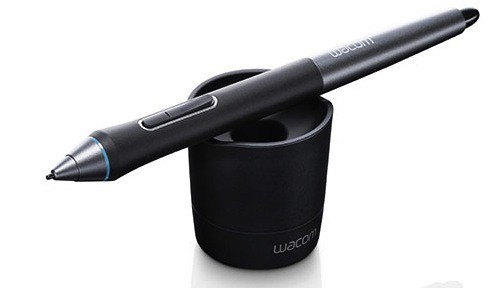 Wacom Cintiq 13 Pen and Touch comes with the pro pen, which contains 2 buttons on its side, and feels a bit different from the grip pen from Wacom.
The pro pen comes in a very elegant case, which contains 9 additional nibs, all of them are standard nibs, and unlike Wacom’s traditional Intuos Pro graphics tablets. The pen doesn’t come with any of the other nibs types like Flex & Felt.
In additional to the nibs, the pro pen case also contains replacement ring in case you want to customise the look of your pen.
If you have used the grip pen that comes with the Intuos pro tablets. You will notice how the pro pen looks a bit more elegant in general.

When it comes to physical buttons, Wacom Cintiq 13 Pen and Touch has 4 square buttons and a d-pad with rocker buttons in it. In my personal opinion, it would have been nice if it contained a touch ring, as tasks changing the brush size are much easier to do using the ring than rocker buttons, something you will notice in case you moved from Intuos pro to the Cintiq.
But fortunately, since this Cintiq has touch features, it comes with a handy feature called On-Screen Controls, which allows you to have additional soft buttons to do things like that. I talk about this feature in more details in the touch section below.

So far, the touch feature has been exclusive for the bigger versions of the Cintiq, but now it is available in this 13 version of it.
The touch feature is pretty handy, as it will spare you from having to assign buttons to tools like the zoom tool, thanks to the pinch-to-zoom feature, which allows you to zoom-in & out just like you would do in a touch screen smartphone.
In case you are worried that the touch may get in your way while you are drawing, well, sometimes it does. Which is why the Cintiq driver allows you to turn it off if you like, you can even assign one of the express key so that you can turn it on & off as much as you want.
As I previously stated, the touch is the main new feature of this Cintiq, if you don’t care about Touch, then you may want to consider getting the previous Cintiq model, which is likely to be much cheaper for you.
Since the 13 inch model of the Cintiq features touch now, you can now have access to On-Screen Controls. Which gives you additional shortcuts to do common tasks with a touch on the screen.

There are two kind of On-Screen Controls:- 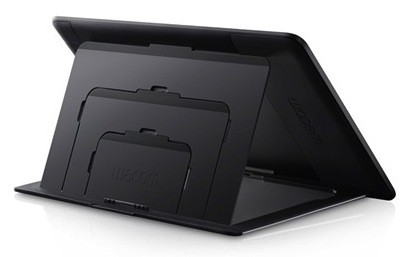 Wacom Cintiq 13 Pen and Touch come with a stand that is adjustable in 3 ways (beside folding it and laying the Cintiq flat on the table). Which allows you to adjust the Cintiq in the way that suits the way you sit. Like many of the features, the stand is another feature that is still the same as the last Cintiq model.

Is it a must to get a Cintiq in order to create great art?

Honestly no, creating great art depends mainly on your own perception of art, something you can develop with persistence and the correct type of practicing. Tools like Wacom Cintiq 13 Pen and Touch may makes it easier to create great art, as they can make it easier for you to draw and colour, especially if you have had a problem with regular graphics tablets.
It is also worth no note that there are many people with off brand or even mouse that can create great art, and that’s because they know what they are doing.
I really hope I wasn’t harsh there or anything, as I truly believe that anyone can create great art if they worked hard on that. :)

I used to like to call the Cintiq “The dream of artists”, and I still like to call it that nowadays, as they make it easier to draw and create artworks in a lovely way.
Wacom Cintiq 13 Pen and Touch features similar quality of the previous model, plus touch capabilities, which were an exclusive feature to the bigger Cintiq modes until this model came out.  While there are some gripes that are still there in this Cintiq from the previous model, they shouldn’t be deterrent for you to get the creativity device of your dream.