Ugee HK1560 is a small pen display with a beautiful design, with a small screen that many will appreciate, as it’s larger than the 13-inches we used to see in the smaller pen displays.

Some people may have some trouble setting it up, but there’s a good chance you will like what you get once you do. The lack of the hot keys won’t be an issue if you don’t mind using the keyboard for shortcuts. 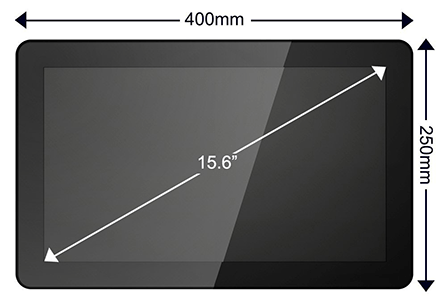 Ugee HK1560 has 15.6-inches screen size, a unique size for a pen display. Lately, we started to see pen displays between the 13-inches & 19-inches sizes we used to see, and I hope this continue to be the case in the future, since 13-inches is small for some artists, while 19-inches is big for them. The smaller size of Ugee HK1560 makes it relatively easy to carry around than the bigger pen displays with 19+ inches displays, it is not really portable like an iPad or anything, but it is really good to move around & establish your own small studio when you travel.

The panel type of Ugee HK1560’s screen is IPS, which has good viewing angles, the screen has 1920 x 1080 HD resolution. It supports 2048 levels of pressure sensitivity, which dictates how much your strokes can be larger or smaller based on how much you press your pen on the screen, just like regular pencils. Ugee HK1560 offers no tilt sensitivity or touch capability, but the ability to draw on the screen for its price is very good.

Ugee HK1560 has a glassy screen surface, which is smooth for drawing. It also comes with a protector to give you some texture in case you want to draw kinda close to traditional drawing.

Ugee HK1560 has a slight parallax, or an offset between the pen & the cursor, this happens around the edges of the screen, it is not a big issue usually, but it is better that you try Ugee HK1560 yourself to see how fine you are with it. 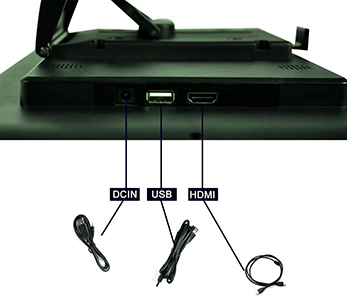 Ugee HK1560 is connected to computer via 2 cables, USB & HDMI. You will also need to connect a 3rd cable for the AC adapter. The ports of all the 3 cables are on the side of Ugee HK1560, which is good, given how some of the pen displays I reviewed had them at the bottom, so they used get squished whenever you tilt the device in certain positions. 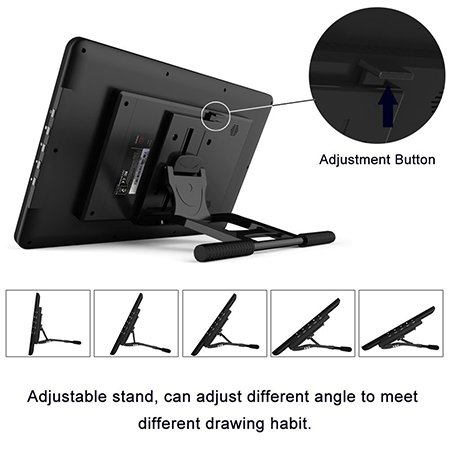 Ugee HK1560 has a stand that allows you to tilt the device backward & forward, which can work well when you sit it on your desk. To give you more options, removing the stand reveals a VESA mount at the back of it, which allows you to mount it on an arm, like Flexible arm, that can make a big different in the way you draw with Ugee HK1560, since you can sit it in many useful positions & even rotating it, so some of the tricky lines to draw could be easier.

Ugee HK1560 has no programmable hot keys, keys that you could program so they replace some of the key shortcuts you use in your art programs. Having these are nice if you only need to use few & specific shortcuts, but many artists don’t mind not having them. The only hot key you get with Ugee HK1560 is the one on the pen itself.

Just like the case with the other Ugee pen displays I reviewed, Ugee HK1560 comes with 2 rechargeable pens, which is good in case one of them broke or ran out of power, though the latter is very unlikely to happen if you kept on charging it regularly.

Ugee HK1560 also comes with a pen stand, which contains 8 spare nibs inside the stand, since the nib of the pen keeps rubbing against the screen, it may need replacement every now and then. How often you need to do so depends also on how much you press the pen on the screen while you draw.

There are two buttons on the pen itself, one of them activates the eraser tool by default, but you can customize the two buttons to your liking. 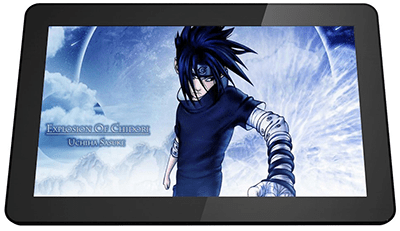 Not really as portable as an iPad Pro or something, but it is easy to carry around for traveling, where you set a mini studio to do your artist work in a hotel or something, if you know what I mean.

Ugee HK1560’s installation may be tricky for some people, downloading the latest driver form Ugee’s site can help a lot, since such drivers can have some bugs fixed in them.

Having a Wacom driver installed on your computer always causes many problems when you try to install a device like Ugee HK1560, so removing it first is a must. Using a removal program like CCleaner, whcih can help you a lot here. You will need the paid version to fully remove the driver, but you could download a trial version of it for free from this link.

While it may not be a Cintiq killer, Ugee HK1560 is still a good device to get. The most appealing thing in it is the unique screen size, as many of the aspect seen in similar pen display from Ugee & other manufacturers. Some artists may prefer to have a larger screen, and for those I recommend they check out my other pen display reviews here, which tend to be within the price of Ugee HK1560, so it is not that you will pay much more for that.

I hope you liked my Ugee HK1560 review, and see you again in another review. ^^