The iPad Pro Is A Great Way To Get Into Digital Art, And A Good Alternative To Wacom As Well

Whether you’re a traditional artist who doesn’t like digital art. Or a Wacom user who’s tired of their drivers. The iPad Pro is a good alternative that’s easy to use. Specially if you are all about sketching & painting. Cost-wise, it’s in the middle of all the drawing options out there. But since it can be used for many things besides drawing, it could be a really good deal. It’s one of the most natural ways to draw digitally out there.

Even if you are satisfied with your Wacom device, it’s a good idea to get an iPad Pro to draw & practice your drawing on the go.

Kindly check out the available iPad Pro models in the following Amazon pages:-

Advantages Of Using The Ipad Pro As A Drawing Device

A Friendly Digital Drawing Can Be Accessible To Everyone

If you’re totally new to digital art. Chance that devices like graphics tablet may intimidate you from getting into digital art. Since they have a learning curve before you could use them effectively, specially the traditional graphics tablets that requires you to look into the screen. For someone who’s too used to looking at the paper while drawing. On the other hand, the iPad Pro requires less technical knowledge makes it one of the most friendlier options. It has such a lower learning curve than most options. To set it up, you only need to pair the Apple pencil & you’re good to do, there’s no drivers to install & worry about whether they work or not, no parallax, which is an offset between the pen & where your stroke is (an issue that can be mitigated by calibrating the pen), and so you won’t need to calibrate the pen.

If you’re new to digital art, you’re in a better position to use the iPad Pro. You won’t have to worry about the programs out there. Or adapt your workflow to it. You just need to discover what apps are out there & see what you can do with it.

If you’re already drawing with your computer, many iPad apps allows you to transfer your work to the cloud, and to your computer from there. Many of them support common extensions like .PSD too.

The iPad Pro May Not Be That Costly After All

The cost of an iPad Pro is lower than almost any Cintiq model out there, even when you include the cost of the Apple Pencil (which is sold separately). If you took into account that you are

The Apple Pencil makes many of these tasks easier. For sketching alone, iPad Pro is great. Specially the 12.9 one (I own the 9.7 & I like it). Splitting the screen between the drawing app and a picture you’re using for a reference (with the drawing app taking most of the screen). And you can play music on the background. Making it like an all-in-one device.

Apple have released the iPad Pro in 3 sizes. Keep in mind that the specifications for the different models are quite different. The 9.7-inches, for one, only has 2 GB of ram, giving it less life span than the other models. Also bear in mind that the 2nd generation also has a much better CPU, making it more future-proof. For the most part, I advise you to get the older models are good if you’re low in cash.

Kindly find the specifications for the different iPad Pro models out there:-

If you don’t mind the size, then one of the 12.9 models is great, you can use the real-estate of the screen either to draw you your heart contents or to having more than one application on the screen. That way, you can have your drawing app as well as a picture you’re using as a reference. One good advantage of the 9.7-inches model is that you can access almost any point of the screen with the pencil, which is convenient. The 10.5-inches model comes in-between.

How’s Drawing On The iPad Pro Is?

To describe how drawing on the iPad Pro is. The screen surface of the iPad Pro is slippery glassy, something some artists will appreciate. Whether this is a good thing depends entirely on your preference.

If you prefer to have some friction on your pencil, you can add a screen protector for that. Compared the Cintiq Pro, the friction between the pen & the iPad Pro is a bit harder.

As for adding strokes. The iPad Pro doesn’t requires you to press the pen hard in order to register a stroke. Something that annoyed me in some of the Wacom alternatives I tried before.

If you’re still wondering how drawing on the iPad Pro feels like, I highly recommend you try that at some store if that’s possible. This is an advice I give for pretty much every drawing device.

We can’t talk about drawing with the iPad without mentioning the apps. There are many drawing Apps you could choose from, they range from the simple to the full-fledged ones. I believe this requires a topic on its own, but I can give you a quick glance on some of the ones I tried.

The art programs I tried are:-

I couldn’t use Procreate because it requires iOS 11, which I didn’t want to upgrade to since I like iOS 10 more (some of the multitasking changes in it hurt my workflow).

If the apps on the iPad are not to your liking, and you own a Mac, and want to use any of the desktop applications, then you could turn your iPad Pro to a pen display by using Astropad (the feedback from artists about this is a bit mixed, but it’s worth considering).

Astropad is one more reason to get one of the bigger iPad Pro models. Since you need more screen space on these applications. But you could do fine on the 9.7 iPad Pro.

As of the time of writing this post. Astropad is only available on Mac OS.

If you’re a Wacom user & you’re sick of the drivers issues. Then I should consider the iPad Pro. As there are no drivers to install, no Parallax or calibration to do, even when you change your sitting posture.

As I mentioned in this post, you can use your iPad Pro to draw with Mac OS applications using Astropad. While this can be a hit or miss for many artists, it can save you from Wacom if you’re not willing to stick with them. 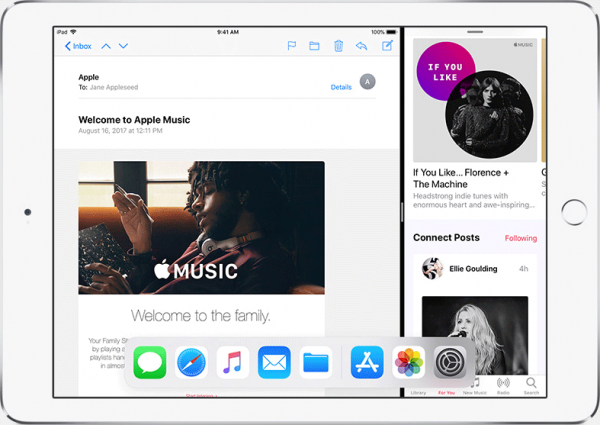 Besides having a great drawing device, you are going to have a full-fledged tablet to carry around, one that could do all sorts of things. If you plan to carry your drawing device around, the iPad Pro doesn’t stands out if you plan to sit down compared to some of the other options, like the MobileStudio Pro (a pricier option worth considering, but it has an awful battery life), as people are used to seeing iPads around (at least where I live).

Things To Watch Out For In The iPad Pro

While I totally love the iPad Pro as a mean for drawing & sketching. It’s not a 100% perfect. It has issues & things you need to be aware of before you get one.

For one, the palm rejection feature, which is designed to make sure your hand won’t interfere with the touch screen while you draw, is not perfect. I often find a dot appears where I place my palm, and sometimes the screen-rotation gesture gets activated, resulting in the canvas to slightly rotate one way or another. This forced me to use a glove to avoid these issues. As they started to get annoying after some time.

While I love the iPad Pro as a drawing device, and while I am sure it can also be used for photo-editing as well, as there are many good Apps for that. I wonder how 3D modelers could fare with it (it’s possible to have good apps for that in the future).

Speaking of photo-editing. One feature that’s available on Wacom & similar devices is the way the cursor hovers to wherever you place the pen. Making it easier to edit images precisely, this feature doesn’t exist in the iPad Pro, making it possibly awkward to edit photos.

Also, you can’t customize the iPad Pro’s pressure curve out of the box. A feature that makes drawing much easier (you could still make great artworks despite that).

While I don’t claim that the iPad Pro is better than Wacom devices in every single aspect of drawing. It’s the closest thing to drawing on paper I know yet. Take this from someone who has been getting annoyed with Apple in the recent years. The iPad Pro managed to earn my satisfaction. While I managed to have a working Cintiq Pro & Intuos Pro at my disposal (after all sort of attempts), it’s nice to have a device I can fall back into in case something went wrong with them. Besides being able to use on the go.

There are many cases where I may not recommend the iPad pro over Wacom. Like in case you plan to work for a studio, where from what I know they mostly use Wacom devices. Or in case there’s no equivalent apps to what you use on your full-fledged computer. But if you’re an independent artist who can use whatever works for you. Or you want something to practice your drawing, then it’s among the top choices to consider.

There’s a good chance applications like Astropad will become better & better in the future. Making it a great Cintiq replacement you could take anywhere with you. It’s a common wish among artists for Apple would release an even larger iPad so they could replace their Cintiqs with it.

Kindly check out the available iPad Pro models in the following Amazon pages:-