Let’s See What The New Intuos Pro Has To Offer, Is It Better Than The Old Intuos Pro?

The new Intuos Pro has brought many changes over the older model, most of these are positive. It takes a smaller footprint than the previous model, while offering similar active working area. It offers 4 times the pressure sensitivity with the Pro Pen 2, and connects wirelessly to your computer using bluetooth, rather than Wacom wireless kit. As for touch, you can turn it off by using the toggle on the side, rather than assign an express key to do that. One cute feature of the new Intuos Pro is that the new pen holder could be used to remove the pen nibs, rather than using the ring inside the pen holder to do that (in the previous model). When it comes to the negative, there’s no small size model for the new Intuos Pro, so your only choice is to get the older Intuos Pro, which Wacom offers as an alternative to that.

An Overview Of The New Intuos Pro

Some of the differences are minor, while some are worth it, I will leave that to you to decide.

Now let’s get on with the comparison:- 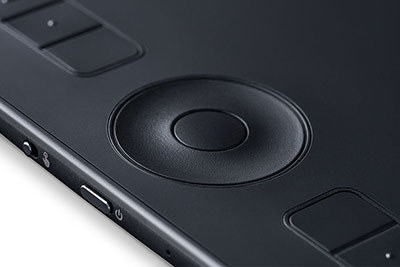 Unlike the original Intuos Pro, the new Intuos Pro has a toggle button in the side, which you could use to turn the tough feature of & off. You could still assign one of the express keys of the old Intuos Pro to do so if you like. But having a dedicated button for that is very convenient.

Smaller Footprint On Your Desk

The new Intuos Pro is much smaller than the previous Intuos Pro, but offers a similar working area. The medium sized model feels kinda like the small modem of the previous generation. This makes it easier to work or to have more things on the top of your desk. The newer model also features a metal plate at the button of the tablet, which is a nice addition.

The active drawing area is a bit different between the new & previous Intuos Pro models. Kindly find the models in the active area for both the large & medium models in the following table:-

The New Intuos Pro Has No Small Size Model 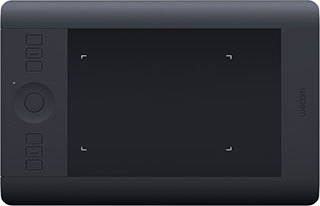 Unlike the previous Intuos Pro model, as well as the older Intuos 5 & Intuos 4. The new Intuos Pro offers no small size. By the time of writing this post, Wacom offers the small version of the old Intuos pro in their size instead.

While I tend to recommend people to get the medium size or bigger most of the time. The small size has the advantage of being easy to carry around, especially if you have a small laptop (I use my small Intuos 4 with my 11-inche MacBook Air while I travel, and it works very well for me).

Pressure sensitivity on the older Intuos Pro is 2048, while it is 8196 in the new Intuos Pro. That’s 4 times the amount of pressure supported. While some artists would appreciate this, I totally don’t recommend you get the new Intuos Pro just for that. Both the new & old Intuos Pro support ｱ60 levels of tilt levels.

The New Pen Holder:- A New Way To Remove The Nibs

The dome-shaped stand looks more beautiful than the stand we are used to see in the previous models. Above that, the new stand doubles as a nibs remover tool, so there’s no longer a need for the nibs removing ring that we used for years.

While that also may not be something you will specifically get the new Intuos Pro for, it’s still a nice addition to enjoy in case you decided to get it.

The new Intuos Pro works wirelessly via Bluetooth now, rather than the Wacom wireless kit, which came with the previous model, and required you to insert a USB dongle to your computer. This makes things easier, as laptops come with bluetooth all the time now, and bluetooth USB dongles are all available. Bear in mind that you can’t replace the battery in case of the new Intuos Pro.

With the newer Intuos Pro model, Wacom offers 3 kinds of texture sheets:- standard, smooth or rough, the smooth surface is a welcome addition, as the surface of the new model can cause the nib tips to wear down.

In case of my Intuos Pro, which I had since 2014, the drawing surface became smoother with use, which is how I prefer it to be, and now nibs tend to last much longer. I would definitely have wanted to regain the drawing texture had I thought it was good, something that’s possible now with the texture sheets.

While the new Intuos pro provides some good & nice features, the older model is still a good viable alternative if you could find it at a good price. Specially with the replaceable battery. It’s not that all artists really need the increased pressure sensitivity of the older model.