The new Intuos 2018 are a good entry-level graphics tablets for those willing to get into digital art. The small model with no Bluetooth (CTL4100) is particularly good if you want to have an affordable Wacom tablet, its price is a bit close in price to the alternatives (although it’s smaller in size).

While the Intuos are entry-level tablets, I dare say professionals could use them, as long as they don’t need some of the features exclusive to the higher-end Intuos pro, like the large size, tilt sensitivity.

The compact design of the Intuos is nice, the colors are not bad, but it would have been nice if the color Berry was available worldwide. The additional pressure sensitivity is a good addition; though it’s not something I look forward in graphics tablets to be honest.

Whether you like the bundled software is a matter of preference, but Corel Painter Essential 6 is a good painting program if you want something to imitate the way traditional drawing media. Clip Studio Paint Pro is good for drawing, though some artists may not like to color with it. I cannot comment much on Corel Aftershot 3 much, since I don’t have enough experience with it to say.

Since I don’t know a specific name for this new model, I use the name the new Intuos 2018 throughout the review, the same thing I did with the Intuos Pro 2017 (reviewed here). 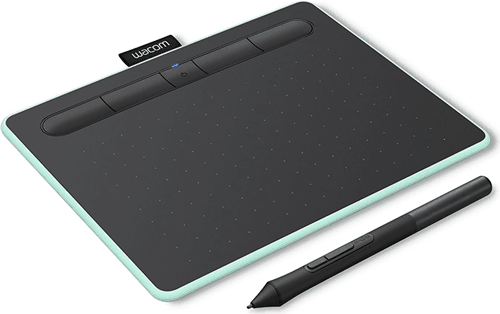 Overview On The New Intuos 2018

The new Intuos has a very similar design to the previous one, which was called Intuos Draw, Art, Comic, Photo & 3D, mainly dependent on the software that came with it. It’s a beautiful & compact design. Wacom’s products are always pleasing to look at, they’re like the Apple of graphics tablets, for both good & bad. There isn’t much of a bezel in this model, since Wacom seems to be optimizing their tablets so that they aren’t larger than they should be. 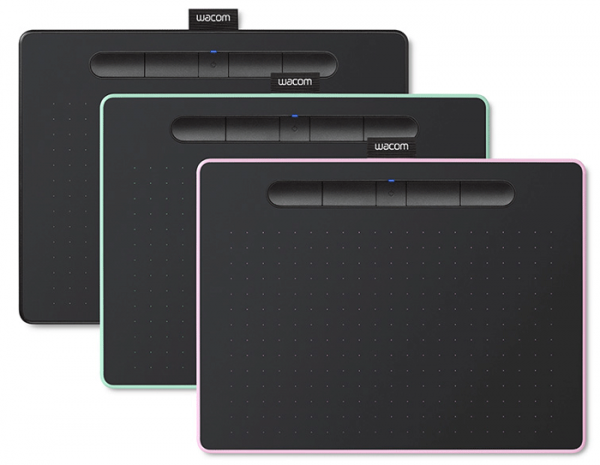 For the most part, the new Intuos 2018 comes in two colors, black & green (or Pistachio, as Wacom calls it). In case you’re wondering, this is what Pistachio looks like:- 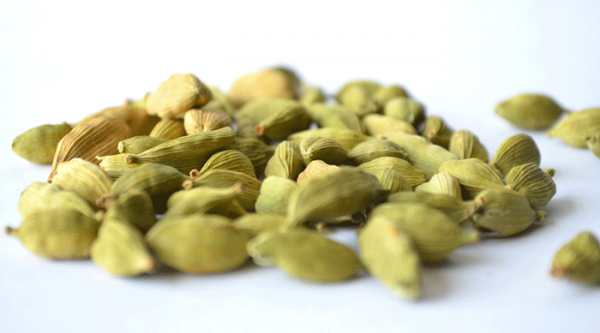 Besides these 2 color, there’s actually a 3rd color for the new Intuos, which is berry, which is the most beautiful in my opinion~ :3.

Berry is only available in certain region, as Wacom states in its site, but they didn’t specify which ones. For that reason, I went to the different Wacom online stores, like the American & European to check out where it’s available, but that color wasn’t there. I was only able to find the berry Intuos in the Japanese Wacom site, and for the Bluetooth models only, as you can see in the following picture (at times like this, you appreciate knowing some Japanese):- 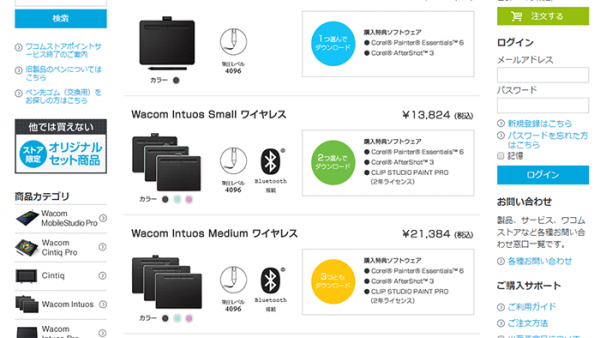 My guess it that the color berry is made after the Japanese Sakura berry (this is not the first time the Japanese get more colors for Japanese products, as the PS Vita for one got some beautiful colors).

I don’t know if Wacom would release more colors in the future, but they seem to be focus on two colors for each model for their Intuos tablets.

Note:- The small Intuos model with no Bluetooth only comes in black. Kindly see the following table to know which available colors for each model:-

The pen for the new Intuos has no eraser, as the back of the pen is where the nibs removal tool. Recently, Wacom has been innovating when it comes to the nib removing tool, as the pen holder for the Intuos Pro is also work as a nib removal tool (I am aware some artists want innovating in core areas, but I needed to point that out). 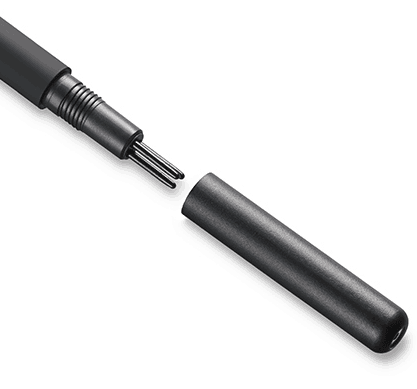 Inside the pen, Wacom has placed 3 space nibs inside of it, making it closer to you. The last Intuos model also had 3 nibs as well, which came inside the graphics tablet itself.

The pen support 4196 level of pressure sensitivity, or 4K as Wacom calls it. That’s double the pressure level of the previous model, if you are an owner of the previous Intuos model, don’t worry about that affecting your level of work, as 2048 is enough to create all sort of good artworks. So the pressure levels are not a reason to upgrade to the new model to be quite honest. I have always stated how pressure sentivitiy is overplayed when it comes to graphics tablets.

Just like the case with all Wacom graphics tablets, the pen doesn’t requires battery to work at all, as it takes power from the tablet itself. There are two buttons on the side of the pen you could customize to do keyboard shortcuts & the like for you.
#CommissionsEarned

All The new Intuos models have 4 Expresskeys (or hotkeys), which are keys on the tablet itself you could customize to do all sorts of functions for you (so you have 6 buttons to customize, if you included the two buttons on the pen). From keyboard shortcuts to mouse clicks, you could also set one of the keys to open the good old radial menu, which is a circular menu you could customize to have more shortcuts. Here’s how the radial menu looks like:-

4 Expresskeys is the same amount the previous model had, the previous model also had the keys on the top part of the tablet, but placement of the buttons is a bit different, which makes it easier for you to press them using one hand.

There’s a 5th button in the middle of the 4 buttons, which is the power button, I don’t know if placing the button there is a good thing, as it can possibly be pressed by mistake by some artists.

The new Intuos comes in two sizes, small & medium. You can see a the two models here, the medium model has more space between the edge & the express keys

Picking the right size is one of the aspects that can make difference in a graphics tablet (as opposed to pressure sensitivity, which is overplayed a bit). In case you’re wondering what size is the best for you. The medium size is good for most people, especially if you draw with a larger monitor with high resolution. Using a small tablet may require you to zoom in to draw lines with the same precision, the additional drawing area in the medium-sized tablet allows you draw those lines precisely without zooming more easily. If you’re the kind that draw lines with a lot of small strokes, then you may do well with the small model. You will need more precision when you use your tablet for drawing & painting, but not as much in case you’re planning to use it for photo-editing. In case you’re confused about all that, then pick the medium model just in case. Since picking the right graphics size is a topic on its own, I have a post discussing which graphics tablet size to get in here.

If you want an affordable Wacom tablet, then the small Intuos model with no Bluetooth is a good choice for that. It’s also a good choice if you want a graphics tablet to get started with digital art, then I highly advise you to get that model.

There’s no large size for the new Intuos, as only the Intuos Pro ever comes in that size. Fortunately, most artists can do well with the medium size in the worst case (I personally like large graphics tablets).

Comparing the active drawing Area (the area you actually draw on, as opposed to the whole tablet) with the actual tablet dimensions shows you how compact the new Intuos is. 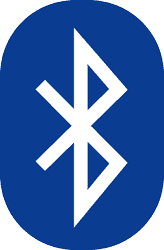 Out of the 3 new Intuos models, 2 of them support wireless connectivity via Bluetooth, which can be more convenient to use than a dongle, especially if you have limited ports in your computer (some Windows tablets only have 1 USB port). Though to be quite fair, dongles have been more reliable in general for me.

This is one more improvement that Wacom did to the Intuos Pro 2017 that Wacom did to the new Intuos. If you plan to use your Intuos on your desktop, then having wireless connectivity may not be a deal breaker for you, but it will help you avoid cables clutter. But if you plan to carry it on the go, then it will be super convenient. If you’re the kind that carry their laptop around, you won’t have to worry about connecting your tablet each time you get to work. Wireless functionality is one thing where regular graphics tablets like the Intuos are still better than higher end pen displays like the Wacom Cintiq, which need to be connected with cable for you to be able to use them (Who knows, maybe we will see a Cintiq with wireless in it in the future).

The battery of the wireless is built-in & cannot be replaced. The previous Wacom models that supported Wireless did that with the Wacom Wireless kit (reviewed here), where you could replace the battery in case it stopped working. It is a bit of waste to seeing companies create products that way, I understand that Wacom probably wanted to make the design as compact as possible, but since a graphics tablet is something that lasts for years (sometimes for 10+ years), having a component that can’t be replaced can make it harder to continue to use the tablet for that much time, even if still it works.

The Bluetooth model can still be used with USB cable in case the battery is out of charge, or if you couldn’t connect your Intuos with your laptop for whatever reason (Bluetooth can be a pain at times).

The medium-sized Intuos only comes with Bluetooth wireless (there’s no USB-only model), while the small model gives you a choice between USB-only or wireless models.

To an extent, Bluetooth is one good reason to upgrade to the new Intuos if you have a tablet that doesn’t support that, at least much more than pressure sensitivity.

Unlike the last model, the new Intuos doesn’t support Multitouch. Making this this a feature only the higher-end Intuos Pro. It’s not a deal breaking feature really, it’s a nice-to-have one feature if you asked me, I am just stating its unavailability so you would know. As far as my experience goes, Multitouch is not convenient to use the same level as smartphones. In the past, many artists had worried if touch would interfere in their work (it has always been possible to turn touch off in Wacom tablets that supported it).

Just like the case with the previous model, the new Intuos comes with free software you could download once you register your device. You get to pick up to 3 of following software, depending on the model you picked (see the note below):-

In case you’re curious about the applications above, each of them has a free trial available, which anyone can download for free to try them out for a limited time. Even without buying a Wacom tablet.. I usually advice people to try different software for their need, so by downloading free trials, you could get to see all the available options out there.

Note:-The number of free software you get depends on the Intuos model you chose:-

What Are The Differences Between The New Intuos 2018 Models? And What Model To Pick?

To see the new Intuos in action, see the introduction video by Wacom here:-

A Final Word About The Intuos 2018

So far, the new Intuos are good graphics tablets, while I generally like them so far, they haven’t introduced much new features. The main selling points to them are the Bluetooth support & the bundled software. The pressure sensitivity is not something I would advise you to get the new Intuos specifically for, especially if you’re happy with your current tablet.

I hope you liked my the new Intuos 2018 review, and see you again in another review. ^^