Let’s Learn The Proportions Of The Female Human Body

This lesson will focus on the proportions of the female human body, it can also serve as an introduction to drawing it to a degree. You still need to learn the more details anatomy (since I am a big advocate of focusing on one thing at a time).

To do the measuring, I am going to use two methods, the heads count measuring method, which I discussed in my post How to measure Proportions in different ways? (Both Good & Bad), as well as another proportions measuring method I will introduce as well.

As a reminder, this post is a part of a series on drawing proportions, you can refer to the first post of the series here in case you missed it.

Tip:- In case you faced some difficulties practicing the proportions mentioned here, please refer to my 6 Practical Exercises To Help You Draw Proportions Right post, which includes simple tutorials that can help you practice proportions in a simple yet effective way.

The Two Approaches In Drawing The Human Figures?

There are two approaches to draw the human body using head count. I will discuss both here. First, there’s the common approach, which divides the body into different sections, each section is equal to one head. This method is called head-count method.

There’s nothing that stops you from using both methods. Determining the overall height of your figure using the first method before you start drawing it can help you avoid drawing a figure that’s too long or too short, for example.

How Tall Is The Human Figure Should Be?

Humans vary in height, and so the number of heads count for each person varies as well. For simplicity, let’s take it that the average human body is 7.5 heads tall, though many drawing books & references use the 8-head figure as well. Learn to draw that right and you will rarely have to worry about your standard figures, or part of it, being too tall or short. After that, you can vary the height of the figures you draw. The key is to be consistent about the specific proportions. If one of your characters is 6.5 heads tall, you have to always draw that character that way every single time.

Here’s the full human figure, with each tick is equal one head:- 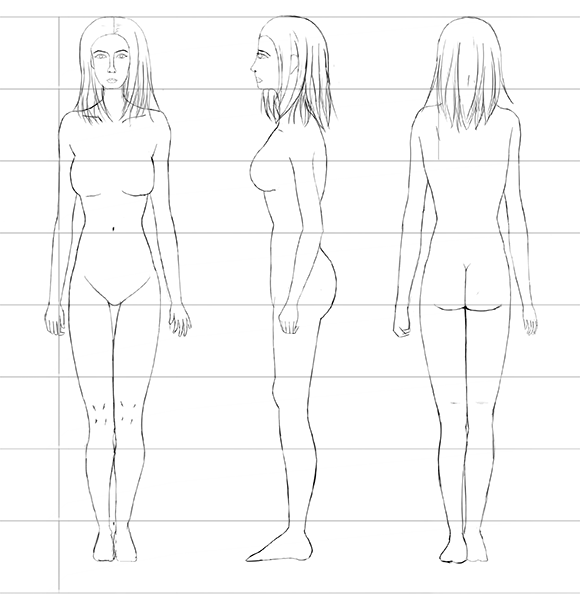 The Female Body Proportions From The Front

For simplicity, I have the head already drawn for you here. Let’s draw the rest while having a look at the proportions along the way.

If we went down by one head, we will get to the bottom of the shoulder, and around the armpit:-

While drawing the shoulders, bear in mind our female figure is heads wide (it can vary from a woman to another), so you have to take care of the horizontal proportion of the head relative to the head too. It can be tricky to take care of two proportions at the same time like that, specially at the beginning of the drawing, but this is the part that can make or break your drawing, as everything else in the figure you draw will depend on it, so spend the most time doing it.

Remember, you don’t need to draw your final lines in one go the way it’s shown here, you can make a quick sketch with the right proportions, and take many attempt at that, and using the number of guidelines you want, then draw the figure lines at your own pace. Drawing is never about doing everything at once.

Once the important part of the figure is fully drawn, let’s continue going down the line. From there, doing down one head will get use slightly below the narrowest part of the waist:-

The next steps gets us to the bottom of the hip, like here:-

One head below, and we are through the middle of thighs, slightly above the knee:-

Then next ticks contains the knees, as well as the widest part of the shin:-

The feet is to the end of the shin

The last half head is for the feet, which completes the figure for us:-

So far, we saw the most prominent proportions. For the sake of helping you memorize them, we will repeat the same step when we go through the side & back view of the figure, using both ways.

The Female Body Proportions From The Side

The side body view is the same as the front view. It allows you to see different parts of the body, like the butt, for example.

Drawing the body from the side is very similar to drawing it from the front. This makes things easier, but you will still need to learn one or two measure a bit differently. You will also need to practice the side on its own.

Just like the first time, we have the head in place:-

Going down one head will get us to just below the armpit, you can see the arms lines already started to show. The same can be said about the breasts:-

And just like the case with the front view, the 3rd head ends just below the waist:-

One head down, and we are at the bottom of the hip. This time around, we can see the butt from behind too. Not the whole butt is shown here, but most of it anyway:-

The next head gets us through the thighs, and slightly above the knee

The rest of the shin is one head, this includes the knees too:-

The next head includes the shin too:-

The last half head is the feet, which look different from the side. This is where we can see the whole figure now:-:-

The Female Body Proportions From The Back

Now, let’s repeat the proportions, but this time from the back. Many of the body parts, like the breasts, won’t be shown here at all.

Let’s start with the head, the hair covers all of it, but the ticks can show you where it ends:-

The 2nd head goes right below the armpit:-

And as usual, the next head goes to just below the narrowest part of the waist:-

One head down, and we get most of the thigh, and slightly above the knee, except that we can’t see the knees here. Knowing that this is where the middle of the thighs is almost here is useful in this case:-

The rest of the thighs is one head, you can see the back of the knee here:-

The rest of the shin is left, knowing how it looks like is all you need to know to draw it well:-

And last but not least, the last half head is half a head:-

I think by now, for the sake of education, the proportions we learned could be made into a cheesy song:-

Bottom of the hip~ Above the knee line~

We can go all day doing the body measurement that way, but the limbs tend to flex and change all the time, knowing their own proportions can help a lot with drawing them right in such cases, without having to worry about where they are located in relative to the body. Let me give you few examples to illustrate this.

The thighs, with a bit of the hips, are about two heads length:-

If you want to include the hips there, the whole thighs + hips are 2.5 heads:-

The above proportions are important, as it helps you draw the more intricate poses, like a sitting female figure, like this one:- 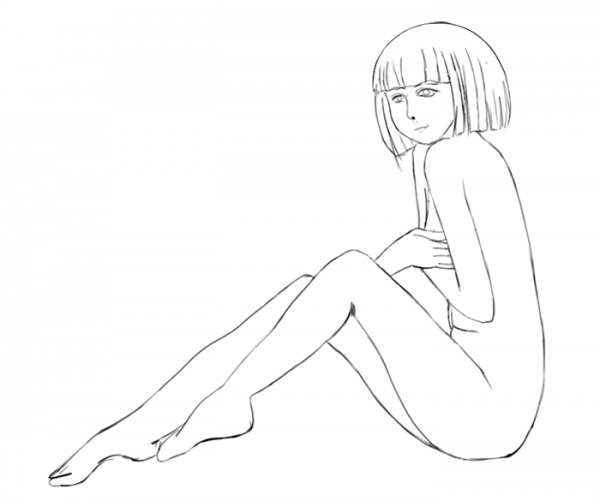 You can create as many proportions like that as you wish. We will take a closer look on the hand on its own in an upcoming lesson, since that’s a very important part of the figure.

So, How Am I Supposed To Learn Or Practice From This?

I can’t really emphasize this enough, memorize & embrace the proportions mentioned in this post, as well as the ones I didn’t mention and you took note of. These are the basic information you use to draw the human body. If you’re going to draw the human body a lot, either realistically or in a stylized way, you will deal with these measures all the time. Learning them will make your life easier, and save you a lot of time.

Draw the human figure over and over, you need to dedicate the time to learn it. If you didn’t learn that in their own time, you will end up wasting a lot of time drawing bad figures & trying to fix them, possibly for years. This can really slow down your growth. If anything you need to learn draw from imagination, it’s these figures & their proportions.

The only time you shouldn’t learn these proportions is in case you don’t plan on drawing human at all, which is unlikely the case if you’re interested in this post.

Like I keep mentioning, mastering the proportions I mention here is the first step you need to build on to become good at drawing humans. You will know you mastered them if you could answer questions like this:-

And many more, these questions are the ones you will ask yourself while you’re in the middle of a drawing, where you won’t want to spend the time finding these answers (that’s where guessing starts to kick in).

Of course, if you want to draw the figure of a younger woman, or a girl, then the proportions will be different, and so you will adjust them to suit the new body. To do that, you need to go study quite the different kinds of proportions. Like how the following younger female is 7 heads, and the ticks stop in different places:-

The more variations like the above you study, the more you will be able to adjust what you learned to draw women of all ages. Keep in mind that the first measures you study are going to be the hardest, but it gets easier each time you study one.

Say you want to draw a standing figure from above. That’s where proportions stops, and that’s where we get into perspective. Which can help you draw the figure with adjusted measures to suit the changed view.

Here’s how our female figure would look like from above:- 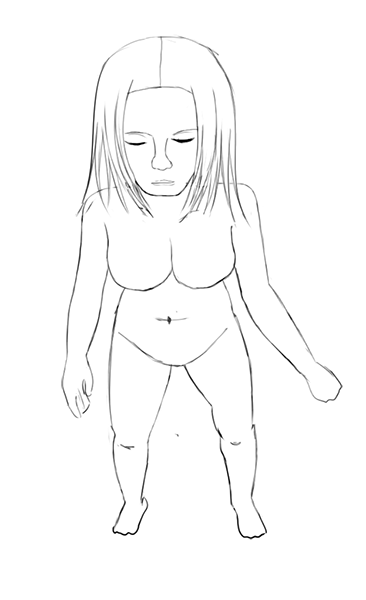 This is a topic I will revisit once I get into writing about perspective, because drawing the human body from any angle requires knowledge about that first & foremost.

A Final Word On Drawing The Female Body Proportions

I am aware that knowing the human body proportions is not enough to learn to draw it any way you want, but it’s a very important step, one that’s an achievement to master. So don’t downplay it just because it won’t allow you to draw human however you want.

It’d a matter of time before I talk about anatomy in more details in this blog. The anatomy lessons here will serve as a complimenting block for everything mentioned here.

I hope you found this post useful, and that it helped you draw the human body better. In the next lesson, I will talk about the male human proportions in a similar manner.

Next lesson:- The Male Human Body Proportions – How To Get Them Right Using the heads count method