Surface Pro is a very neat tablet, but it can be a bit expensive for some people, especially those who only wants to use it for simple drawing, or those on tight budget. Over the years, the Surface Pro has been updated multiple of times, and changed over few iterations. So getting an older iteration can be a good idea for some. To help you with the process, I made this comparison, which compares all the models side by side, while talking to their drawing capabilities as well. Bear in mind that I don’t own any of the 4 models in this article, and the info in this article are based on research. I hope my research have made it easier for you to pick the right tablet for you.

Let’s start by comparison the processor for all the models, since that’s the main component for many of the applications you may run on your device. The first generation comes with only one option, which is Intel 1.7 GHz, which can be boosted to up to 2.6 GHz.

Surface Pro 2 comes with one of the following options:-

Surface Pro 3 comes with one of the following options:-

Surface Pro 4 comes with one of the following options:-

Generally speaking, choosing faster CPU is good to run any application faster, having more cores is good if the application you want to run supports them, many art applications like Photoshop support multiple cores. It is worth noting that the Surface Pro 4 with the M3 processor doesn’t have fans at all, and it is a bit lighter too.

If you want to play games, or run any application that requires graphical power (like Photoshop with GPU acceleration), graphics performance is important. But if all you want to use your Surface Pro tablet for is note-taking, browsing the web or running office applications, then graphics may not be all that important to you.

When it comes to gaming performance, I used the excellent Intel HD Graphics tests in Digital Trends’s article as a reference. Looking at the different tests, it is easy to see that Intel HD 4000, the graphical processor in Surface Pro 1, comes close to Intel HD 4400, the one in Surface Pro 2 by a good margin. The difference is not huge, but it is worth it in case you are picking between the two, and want to get as much performance as possible. It is also worth noting that Intel HD 4400 comes with Intel Core i5 version of Surface Pro 3.

Surface Pro 4 models also comes with 3 different GPUs, the M3 model comes with Intel HD graphics 515, the i5 comes with the more powerful Intel HD Graphics 520, and the i7 version with Intel Iris Graphics, the most powerful among the 3.

According to the numbers in this NotebookCheck article, the GPU in the 3 Surface Pro 4 models beat the ones in Surface Pro 3 hands down.

When it comes to the main ports, all the 4 Surface Pro models share the same features. They all come with a Full-Size USB 3.0 port, a microSDXC card slot, Mini DisplayPort (for connecting your tablet to an external display), as well as cover port & headset jack.

The microSDXC card slot in each of the models support different maximum capacities, The Surface Pro 1 & 3 support up to 200 GB, the Surface Pro 2 supports 128GB, though it could support more, but I couldn’t find anything to indicate that. The Surface Pro 4 supports up to 2TB.

All the models come with only 1 USB port, getting a USB hub is a must in case you want to connect more than one device. There are docking station that provides you with multiple USB & display ports, as well as Ethernet port, you can check out these ports from the following Amazon links:-

Having a kickstand in your tablet is something Microsoft innovated with their Surface Pro tablets. Since many of the other tablets in the market doesn’t come with one out of the box. And so you had to buy a separate case to get one.

Let’s talk about the different stands for the different models. The original Surface Pro 1 has a kickstand with only one position, which you can’t adjust to suit the way you sit (not to deny its usefulness though). The Surface Pro 2 offers the same position as its predecessor, while adding a new position. The Surface Pro 3 took the kickstand to another level, as it offers a continuous kickstand, that allows you to sit your Surface Pro tablet between 0-150 degree, just like in the following picture:- 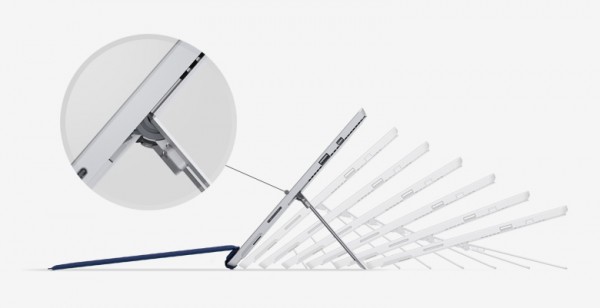 Ram memory is what enables you to run many applications at once, and to run heavy applications as well. It is also crucial in ensuring you can install future versions of Windows by having more Ram for that.

The ram memory in all the 4 Surface Pro models ranges from 4-16 GB. Let’s take the least amount, which is 4GB, it is more than enough to run the latest version of Windows by the time of writing this article, which is Windows 10, as that version requires 2GB of RAM. So any of the Surface Pro models are enough for basic work, but having at least 8GB won’t hurt if you can afford getting a model with that amount, which rules out the Surface Pro 1, which only comes with 4GB. 8GB is the max amount of ram supported in both Surface Pro 2 & 3. While Surface Pro 4 can have up to 16GB, making it the best one for heavy work, you can have that model with 8GB if you want to save few bucks though.

Depending on how you plan to use your Surface Pro tablet, you want to decide how much storage you want to have on your device. For basic usage, the minimum amount that all the models come with, 64GB, is enough, having at least 128GB is better to give you some room for your files, if not more. When it comes to maximum storage capacity, the original Surface Pro 1 offer a 256GB option, Surface Pro 2 & 3 offer 512GB, while Surface Pro 4 has the biggest option as usually, which is 1TB.

It is worth noting that since the operating system will take some space in the SSD, for that reason, you won’t have the full capacity of your tablet for your files & programs. For more details on that, kindly find the available disk space that are available on a brand new Surface Pro tablet on Windows 10, which was taken from Microsoft’s website. I didn’t include the data for Windows RT, as it is outside the scope of this article, but you will see the data for the Surface RT:-

Since it is very likely you are going to carry your Surface Pro tablet around with you, you would want it to last you for the durations of your classes or workday.

There are two ways to tell you about the battery life, the announced battery life from Microsoft, and the actual one you get from the device on the long-term, which is reported by people who used the devices so far. The actual battery life will vary on your usage & the power setting, it also depends on the state of your battery, so you may get a different battery life than what I will mention here. But it is good to have an idea on how much your Surface Pro tablet will last.

The most important thing to note here is that the Surface Pro 1 & 2 both has standard aspect ratio of 16:9. While the Surface Pro 3 & 4 has 3:2, which mean you will see some black bars while playing movies or games, which are usually not designed for that aspect ratio. Some people like that ratio a lot, while some others totally don’t.

When it comes to the digitizers used in the various Surface Pro tablets, the 4 models are split between two common ones, Surface Pro 1 & 2 use Wacom Digitizers, while Surface Pro 3 & 4 use the N-Trig one. The pressure sensitivity varies a lot between the 4 too, Surface Pro 1 & 3 have 256 levels of pressure, while Surface Pro 2 & 4 have 1024 each. If you are new to digital drawing, pressure sensitivity is the feature that allows you to vary the thickness of your strokes based on how much you press within the pen, just like traditional pencils. It is obvious that having 1024 levels is better than 256, unless you plan on doing basic work.

The choice of the digitizer depends on your preference in a way. There are artists happy with both of them, if you have the cash, going to Surface Pro 4 will be future proof the most, especially with how low the IAF it has. IAF stands for “Initial Activation Force”, which is the lowest pressure you need to apply with the pen to create a stroke. If you just want to create simple sketches, going with the Surface Pro 1 or 2 may be okay with you.

Based on the above, it appears that Surface 2 & 4 are the better choices for each of the two corresponding digitizers.

To make it easier to compare many of the things mentioned in this comparison, I included a table with many of these info below.

While people with money can simply go for the highest model, and maybe the newest iteration. Getting an older Surface Pro is a good idea for many cases, and so I hope this comparison has helped you pick the right Surface Pro Tablet for you.

I hope you liked my Surface Pro comparison, and see you again in another article. ^^