While I have reviewed many of Ugee, Huion & Yiynova’s pen displays in this blog. As well as most Wacom’s main products. I never heard or knew much about Planar before. But this touchscreen has garnered my attention with its price. So I decided to review it, which will hopefully help you in case you are looking for a very affordable way to draw directly on screen.

While Planar PXL2230MW doesn’t support pressure sensitivity at all. It can still be used to create artworks to some extent, especially in vector, 3D & animation applications. But I advise anyone who is serious about art creation to get something that supports that very useful feature eventually.

In case you found Planar PXL2230MW interesting, there is a 24-inch version, which is similar to this one, but it supports multitouch as well as single touches.

Note:- As it is easy to mix between the two, this is not a pen display, but a touch screen with a stylus. While it may not be the most ideal choice for art creation. But it is still worth seeing how good it is at that. 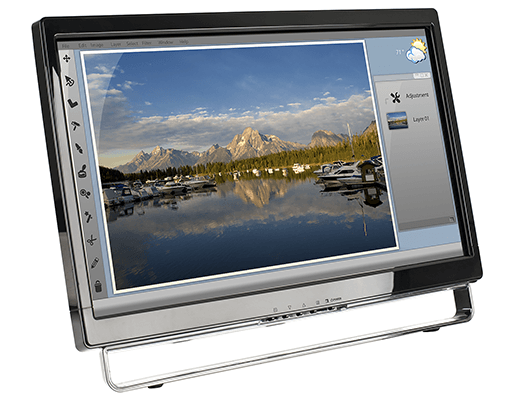 Let’s start talking about the screen. Planar PXL2230MW has a 21-inch screen, with HD resolution of 1920 X 1080, which is a standard resolution in many displays nowadays.

When it comes to the colors, the colors are not ideal for art creation where accurate colors are crucial, but they are okay otherwise.

Since Planar PXL2230MW is a touch screen, it can be used without drivers right away. The screen itself is glossy, which mean they could reflect the light and turn into like a mirror in certain light conditions. This may not be something you mind, but some people would prefer a matte screen that is not reflective. Whether you like this or not depends on preferences.

While Planar PXL2230MW is compatible with Windows 8, it is not designed to go well with it, the bezels of the screen is raised above the screen itself, and that makes it hard to use the Windows 8 touch gestures. According to Microsoft’s Bezel design guidelines, the bezel should be flush or there should be a border around the screen to allow the gestures that starts from the screen edge to work. After a quick look at the product page in Planar’s site, it turns out Planar PXL2230MW was designed to work with Windows 7, so maybe that’s why it doesn’t work well with Windows 8.

When it comes to display ports, Planar PXL2230MW supports D-SUB, DVI-D & HDMI. Making it compatible with many screens nowadays. But in case your computer only supports a mini Displayport, then you will need to get an adapter to connect it.

Planar PXL2230MW comes with bad speakers, so unless you have your own speakers or headphone, you can’t really depend in the speakers of this touch screen.

Since Planar PXL2230MW was designed to be a touch screen, it has no pressure sensitivity at all, this can limit the things you can do with it. Unless you are used to draw with a mouse, and just wanted a better way to create your artworks.

The lack of pressure sensitivity can also be tolerated if you use it for things like Vector graphics, animation & 3D, though many of these programs do have some features that takes advantage of pressure.

Planar PXL2230MW comes with its own stylus, which is hidden inside a holder at the back of the screen. This can be tricky to find unless you know it exists. 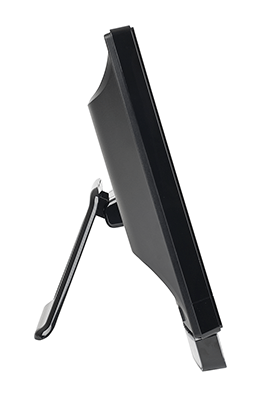 Planar PXL2230MW has a kick stand at the back of it, it allows you to tilt the monitor back & forth to suit the way you are sitting.

More importantly, Planar PXL2230MW also has a Wall mount at the back of it, which mean you can mount it using an Ergotron arm as well, which is a convenient way in case you plan to work with it for hours a day.

In case you plan to use this touch screen with an Ergotron arm, the following arms are compatible with it:-

While it can certainly be used in a limited way to create artworks, Planar PXL2230MW is more like a convenient way to use your computer. Unless you really want something affordable to draw on the screen with. I totally recommend that you get a high-end graphics tablet with your money. As a tablet like the Intuos pro can help you create artworks for sure.

I hope you liked my Planar PXL2230MW review, and see you again in another review. ^^