In this tutorial. We are going to discuss 3 more tools, The Blue Tool

and The Smudge Tool

. The blur tool decrease the focus of part of the picture. The sharpen tool does the opposite, it increase the focus of a certain area, or sharpen it in other words. The smudge Tool smears the picture, similar to what you could to to paints with your finger. Which is why is has a finger icon

decrease the focus of the part of the picture you paint on. This is useful to integrate a new object into the picture, or to remove very small blemishes from a someone’s face. Bigger blemishes should be removed by using tools like the Spot Healing Brush Tool

To illustrate how the Blur tool works, take a look at the line on the picture on the left, see how sharp it is. And compare it to the same line on the right. And see how blurred and unfocused it looks like. This is because I blurred it using the blur tool.

Using the Blur Tool is so straightforward, all you have to do is to select the tool. And then paint with it, just like we do with the brush tool.

I am going to show you two examples for the Blur Tool, one that works, and one that doesn’t work the best way.

Take a look at the following girl picture:- 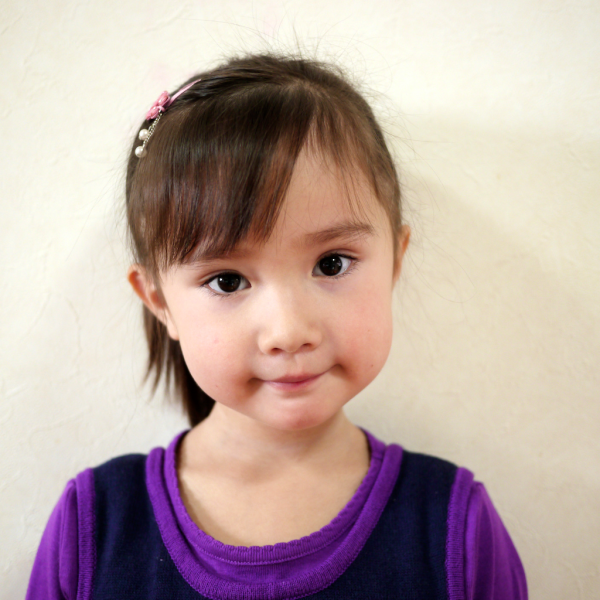 If you looked carefully, you will see a little blemish on the girl face, this blemish can be removed easily with the Blur Tool. 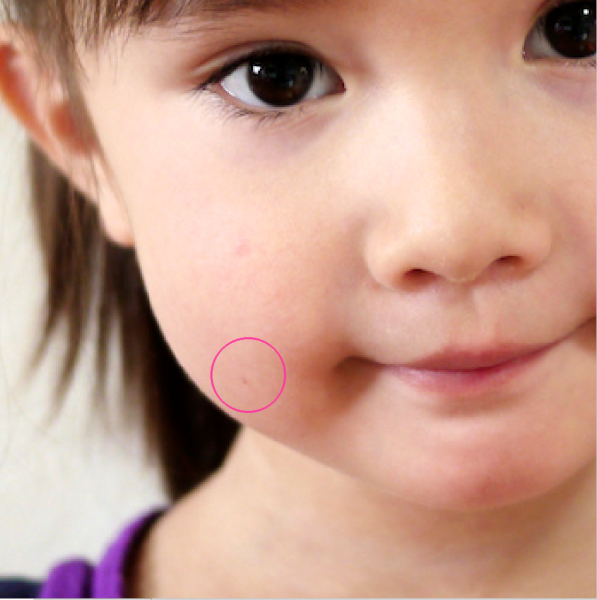 To remove the blemish, do the following:- 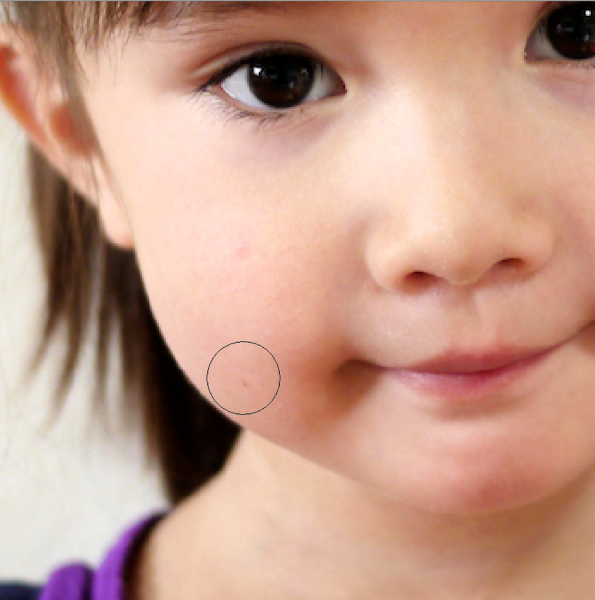 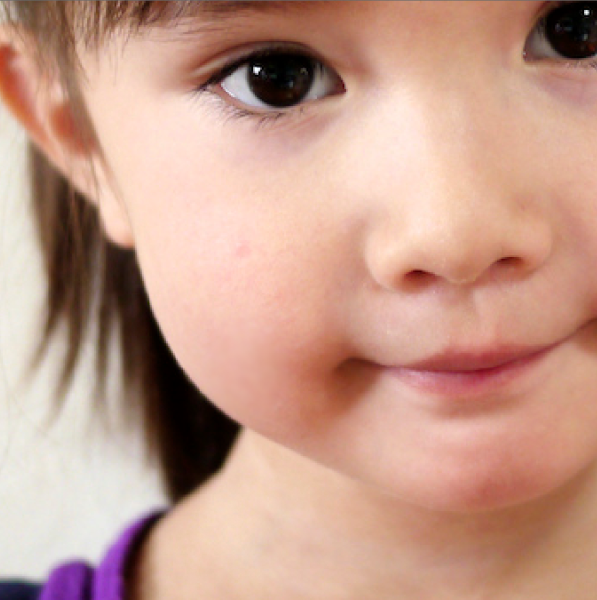 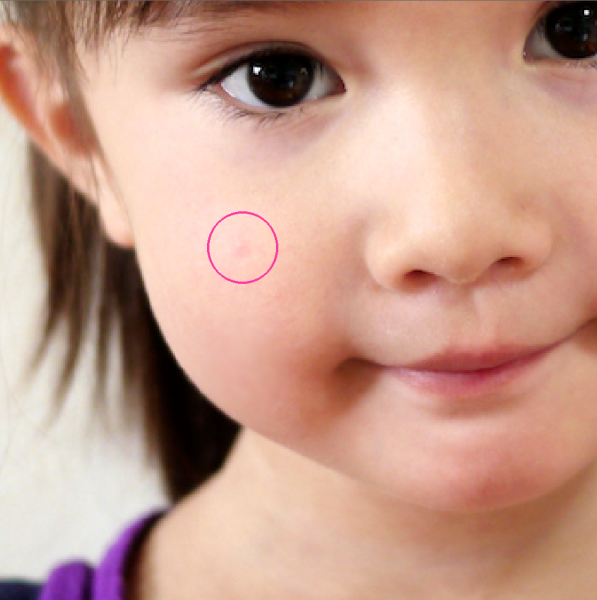 Integrating a new object into a picture using the Blur Tool

Following is a girl I pasted onto the field picture:- 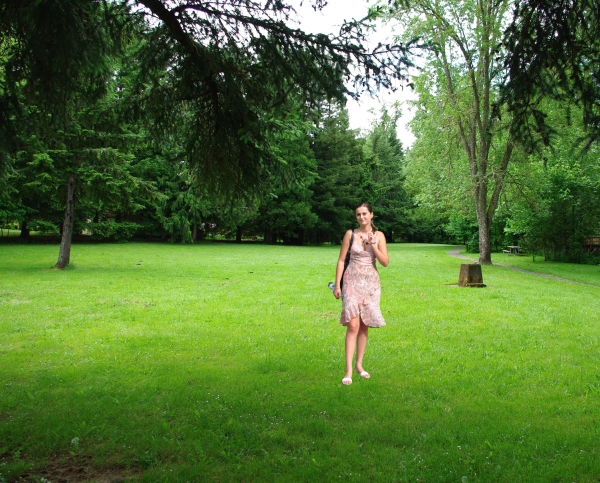 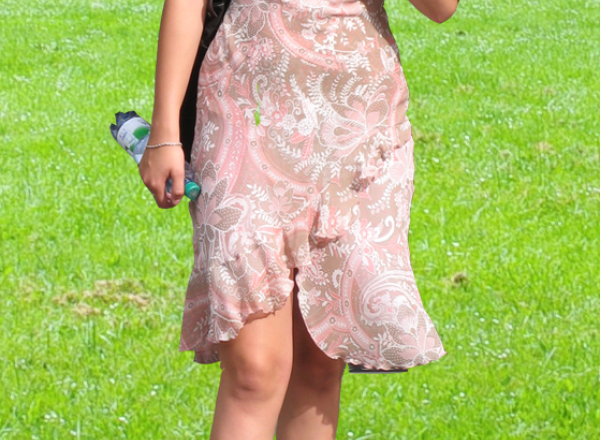 After going through the edges with the Blur Tool, the edges seems much smoother now:- 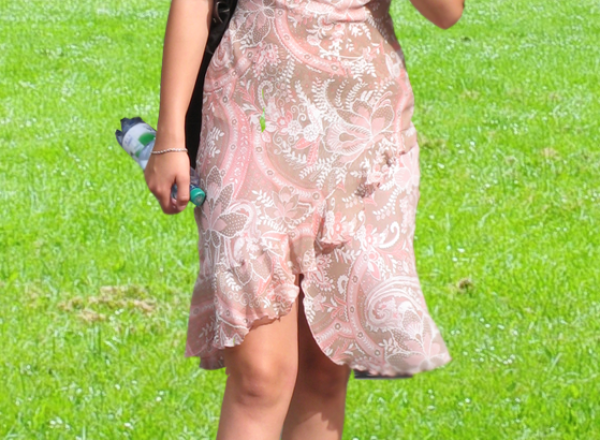 Here are the picture after I zoomed out. Notice how I applied more blur on her feet to makes them look like they sank into the grass 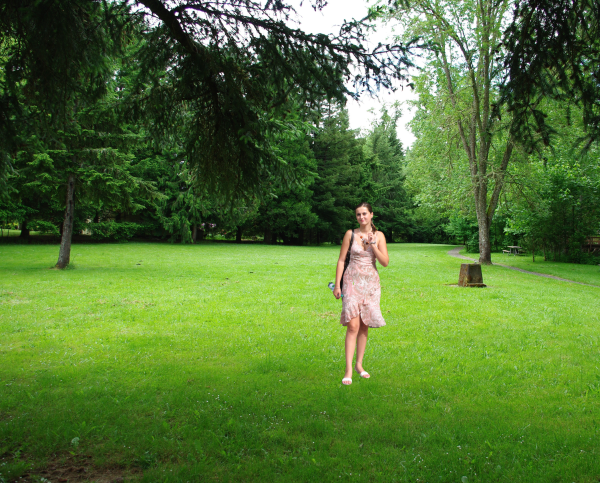 One of the things that you could do to integrate the girl more into the picture is to match her lighting with the picture. To do that, I painted some green over the girl using a soft brush on a different layer. Then I changed the Blending mode to Soft Light and decreased the layer flow/opacity until I was satisfied with the results. Here are the final image I got:-

does exactly the opposite of the Blur Tool 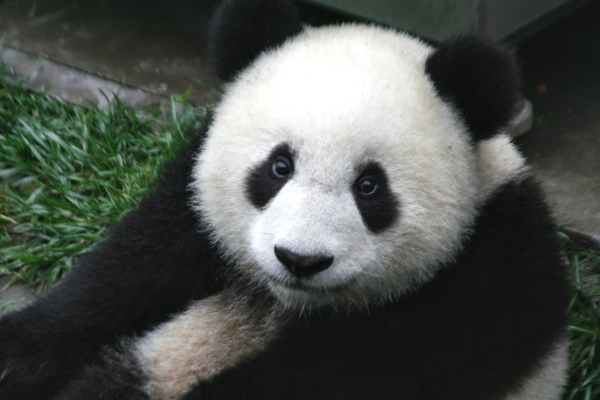 To do that, Select the Sharpen Tool

from the Tools Panel, then start Painting with the tool. After painting a few times with the tool. The details of the Panda face starts to stand out more. 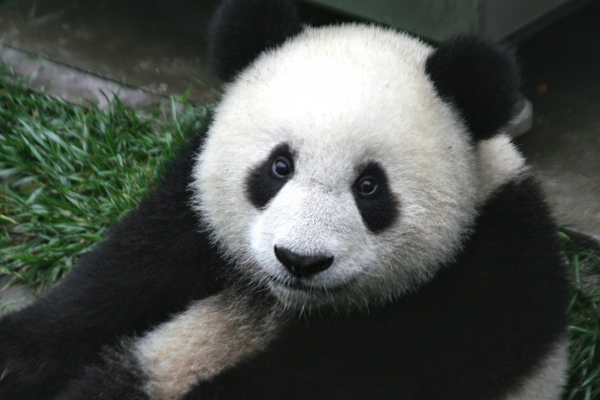 Don’t over do it

is certainly a pleasure to see the details of the picture appears in front of you. This is one of the reasons Photoshop Beginners tend to overdo using  the tool trying to get better results. Ending up destroying the photo. When editing pictures using Photoshop. You have to remember that sometimes less is more. So choosing to sharpen a little bit less is usually better than ending up with a distorted picture. Like the following Panda picture, which was sharpened to death:- 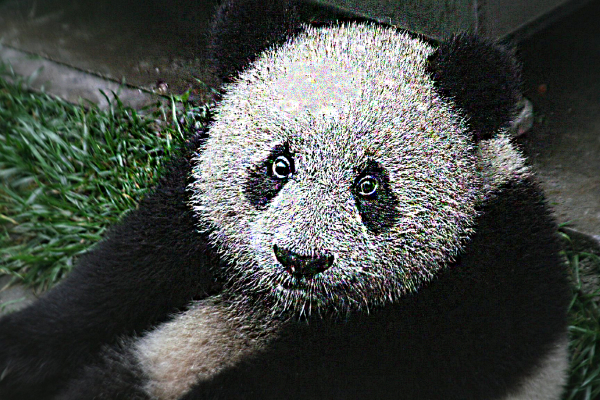 A great alternative for the Sharpen Tool is the Unsharp Mask filter. Which we will explain in the filters tutorial I am going to make soon

The strength option of the Blur Tool & The Sharpen Tool

Take a look at the following Deer picture:- 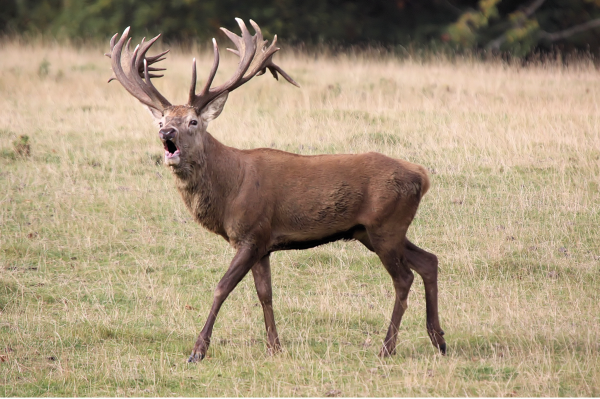 I sharpened the back of the Deer so sharply by setting the strength of the Sharpen Tool to %100. It took me 3 strokes only to sharpen his back that way:- 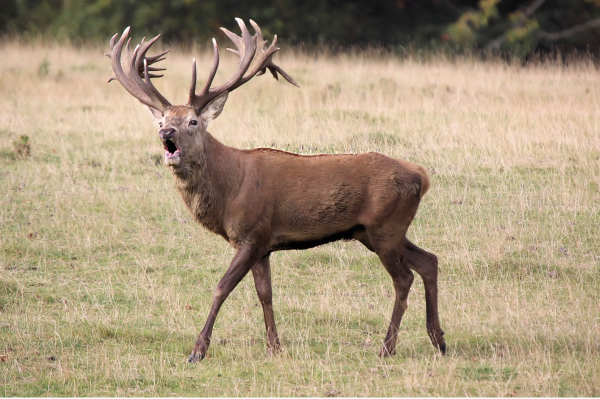 Then I redid the sharpening again, but this time, the strength of the Sharpen tool is set to %25. So it took me 12 strokes to get the same amount of sharpening:- 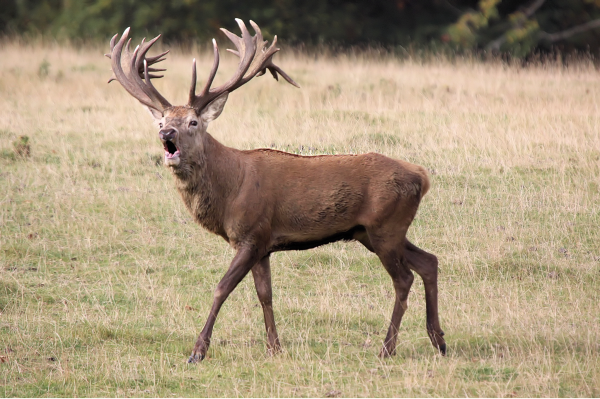 Generally speaking, you could achieve everything you want by keeping the strength of the Blur Tool or Sharpen Tool so low, though that will require you to do much more clicking to achieve the same result. Which will lower your productivity too much.

is intended to use for painting, it aims at simulating smudging the colours with your finger. Similar to how painters do in traditional drawing. But the tool can still be used to do some minor editing here and there

I was able to make the Panda eyes bigger using the Smudge tool here. If you looked carefully, you will notice that the edges of the eyes became somewhat distorted. Which could be fixed to some degree by the sharpening it using the Sharpen Tool.

The Strength Of The Smudge Tool

Just like the Blur Tool & The Sharpen Tool. The Smudge Tool has a strength option that determines how powerful your strokes will affect the picture. The more powerful the strength, the more pixels will move by your strokes. Here is how this option works in general:- 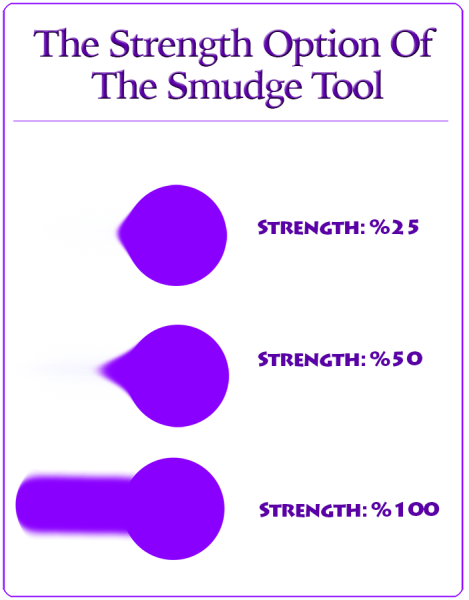 Notice how the Smudge Tool at %100 strength moves all the pixels below the cursor.

Warning:- Be careful about using the Smudge Tool with huge brush tip. As doing so may cause Photoshop to do lengthly calculations. Rendering Photoshop useless until these operations end. Or until you fore quit the program

A nifty feature of the Smudge tool is the Finger Painting check box. When this option is checked, the smudge tool adds a little stroke to the picture, which is fairly useful in case you want to use the tool for painting and colour blending.

I added a few red strokes on the Panda head using the Finger Paint option. 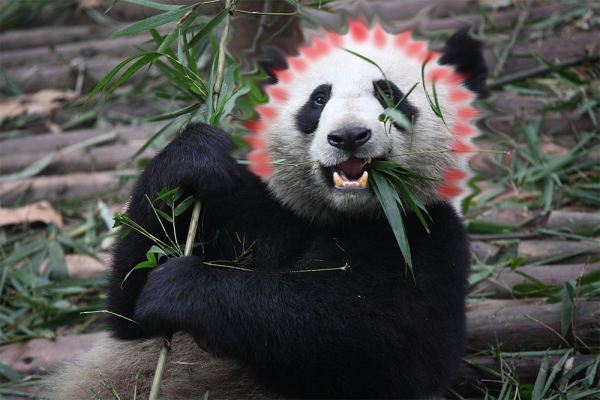 And after working on it a little bit, I added up making the following hat:- 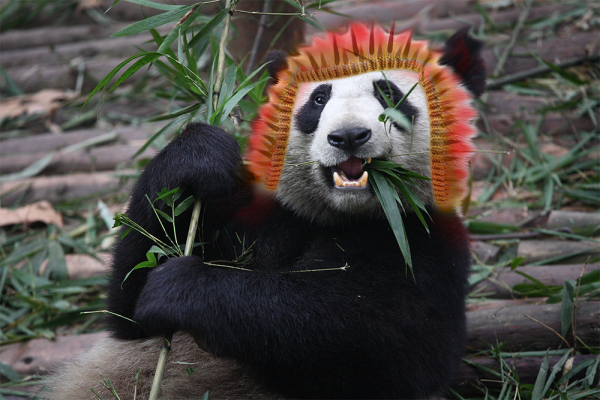 The finger Paint option of the Smudge tool is one of the nicest tools you could use if you plan on using Photoshop for digital painting.

Note:- The Liquify filter provides a much easier way to manipulate pictures than the Smudge Tool. I plan to dedicate a tutorial for that filter.

Blur the surroundings of an object

The Blur Tool can be used to blur the surrounding of the object you want to be the centre of focus. That way, the viewers of the picture will tend to focus on it when they look at it:-

Emphasizing the details of a picture

The Sharpen tool is a very good way to make the details of a picture easier to see. As I have done with the following dog picture

The Smudge Tool, along with the fingerprint option, can be used to create a simple logo. Like the one I created for the fictional company “Fire”. Working on the logo a bit more can make it up to par with professional designs. 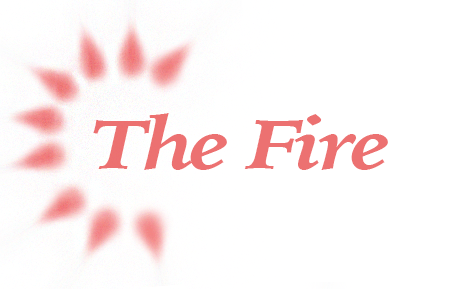 Check my Photoshop book Learn Photoshop CC With Pictures which contains a full course on how to use Photoshop in the simplest way possible.