Diminution Is One More Concept That Gives Depth To Your Artworks

Diminution is the term used to describe how objects appear smaller the further away they are from us. It can be used to give depth and 3D looks to your artworks very easily. It can also be used to help you draw human in perspective as well, which is one of the goals of this series.

It may look confusing at first, but it’s one of the easiest to draw, especially if you understand vanishing points and receding lines (If you like, you can refer to my lesson about perspective types to know about them).

In this lesson, we will take a closer look at Diminution, and learn how to draw it the easy way.

Diminution is the term used to describe how objects, or even distance appears smaller the further away they are from us.

Take a look at the following cars, which are all identical in size. The further away the car from us, the smaller it appears from us:- 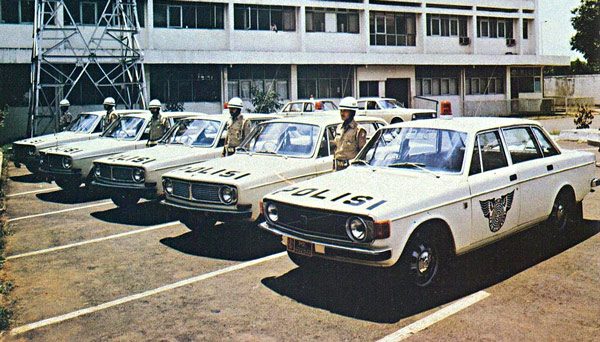 If you looked at the following street lamps, which are all of the same size. You can again see how the lamps further away appear smaller than the ones closer to the viewer:- 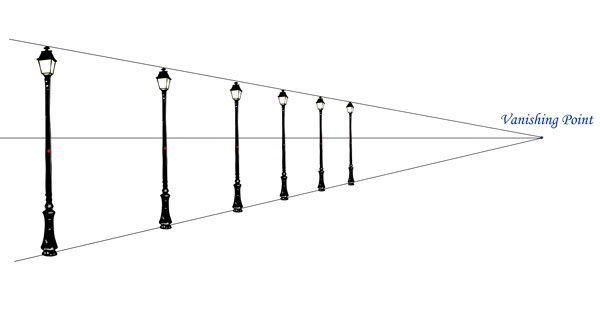 You may have noticed that the distance between the lamps or cars also get smaller with the distance. Despite the fact that they are all equally spaced. This is also caused by Diminution.

If we looked at the same lamps from the side, we can easily see that they are all identical in size & shape, and how the distance between them is also equal. It’s only because of Diminution that they appear smaller to us:- 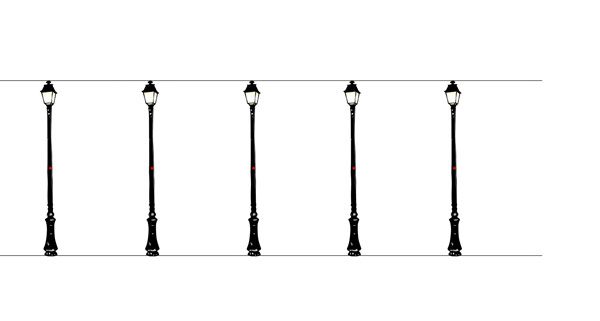 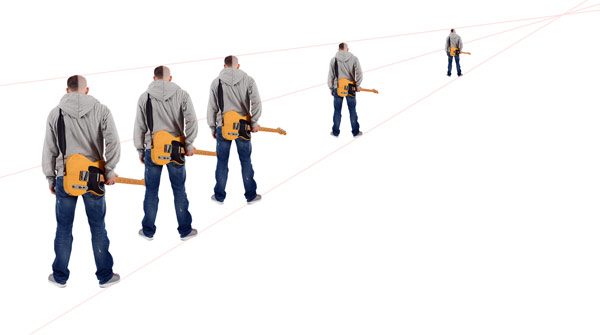 This picture I drew only has one little issue:- The guys are not of the same distance between each other. I will teach you a little trick to get that right in the next section.

How To Draw Diminution, And How To Make Sure Objects Are At Equal Distances

While it’s simple to understand, Diminution is a concept that can intimidate you at first, especially if you tried to draw it without guidelines before. The thing is, drawing Diminution is very simple once you know the way, even simpler than most of the perspective types we encountered so far.

First, we start with drawing the vanishing point, and we draw the horizon line, and two receding lines. The placement of these two receding points depend on your scene. You can draw different receding lines, and follow the tutorial using these lines. You will get different perspective than the one shown here:- 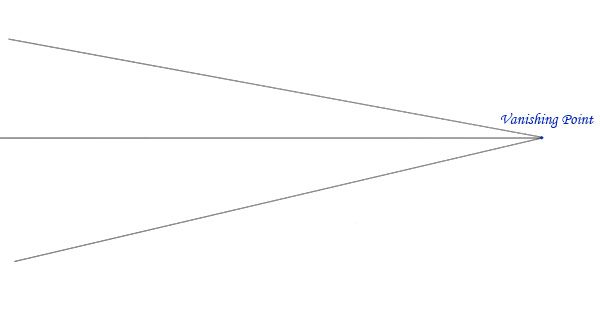 Then we draw the first street lamp. The top & bottom of the lamp should meet at the two receding lines, as following:- 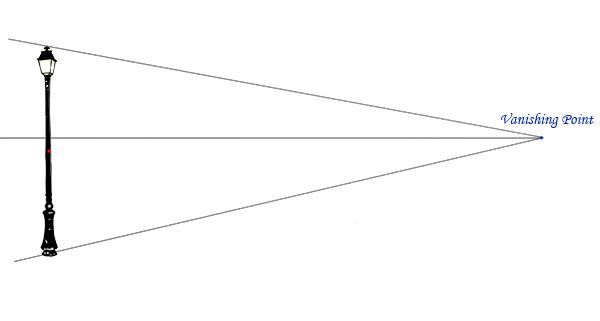 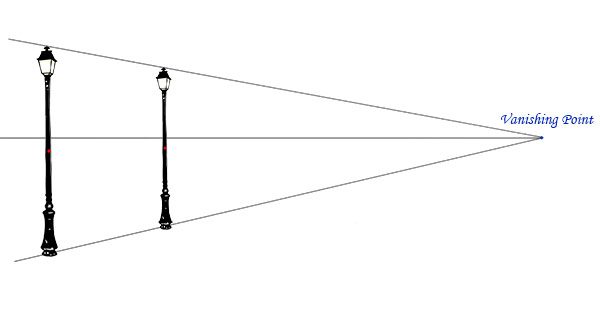 Now, here comes the tricky part, which is placing the 3rd lamp. While we can place it anywhere between the two receding lines we want. We want the lamp to the have the same distance with the other two lamps. 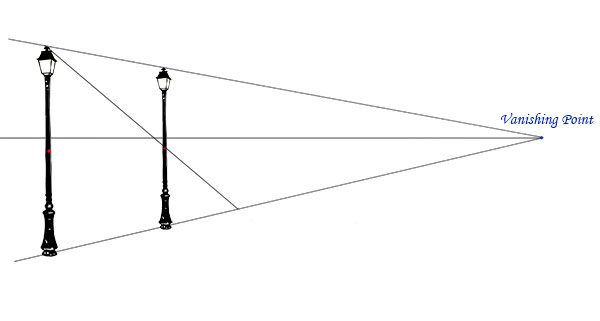 Here’s the 3rd lamp after we placed it:- 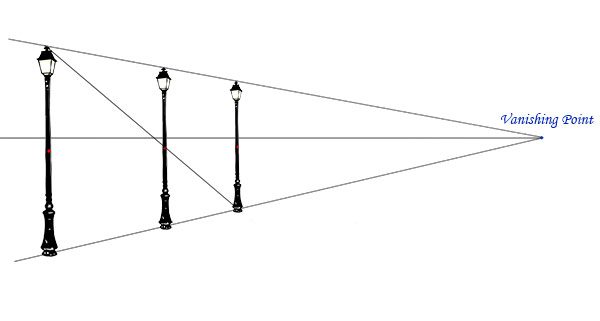 We can repeat the same steps above to determine the placement of the 4th lamp:- 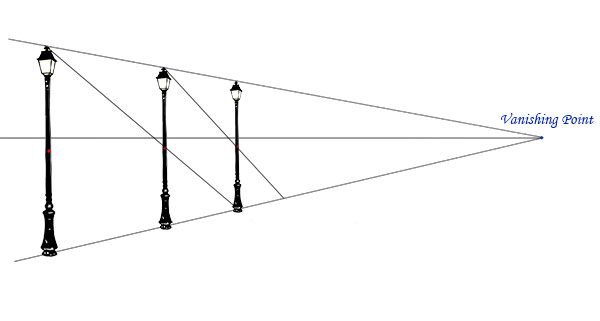 Here’s the 4th lamp after we placed it:- 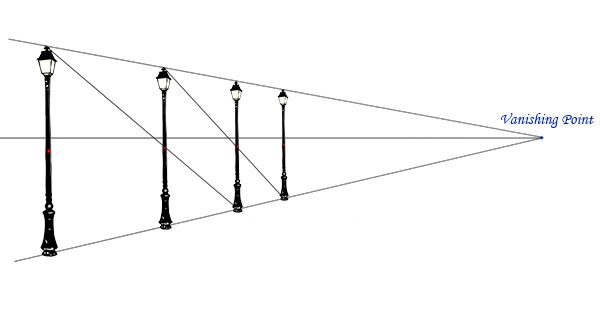 By repeating the same steps, continue adding more lamps to the end of the road:- 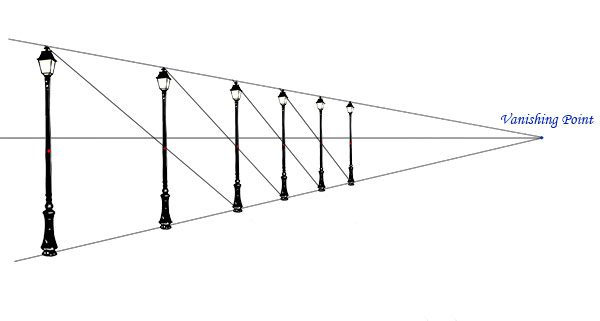 Even if we took a look at the lamps of the side, where no Diminution occurs, the same technique of drawing the lamps at an equal distance applies. As you can see here:- 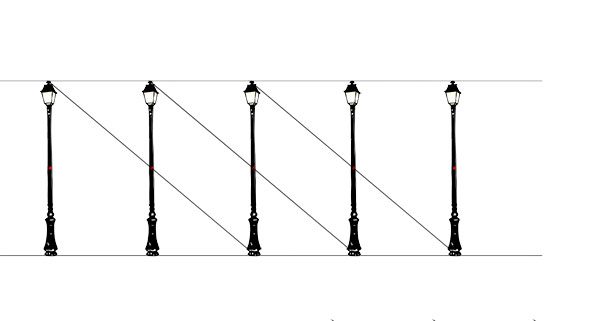 Diminution can be used to draw anything at an equal distance in perspective. Just like we drew the lamps above, we can also have other objects us well, like how I replaced half the lamps with fire hydrants (notice the line from the vanishing point I used to place them):- 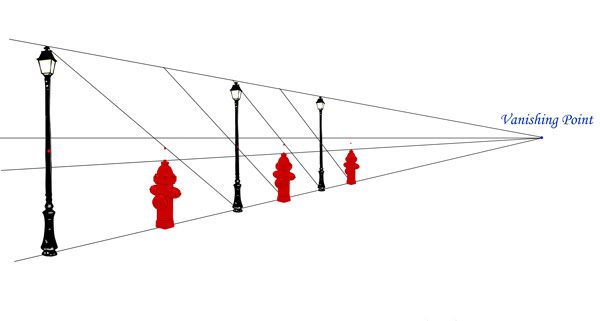 The concept of placing objects at an equal distance can be helpful when it comes to drawing the human figure in perspective. In my series about drawing proportions. We have seen how the human body can be divided into equal parts, each represent parts of it:-

These divisions can make it much easier to draw the human body from the front, side & back. But what about drawing the body from an angle? Where the ticks are of not same distance. Here’s where Diminution comes to rescue. As its main objective is to place objects at an equal distance.

Here’s how I used Diminution to create guidelines for drawing the human body laying down, and with the right perspective (The pink lines represent the measuring ticks for the figure):-

I plan to write a dedicated lesson about drawing the human body in perspective.

A Final Word On Diminution

This is the first step toward drawing objects of equal spacing in perspective. Can be used in drawing many realistic scenes, in a simple and easy to follow method. It can help you with other tricky aspects of drawing, like drawing the human body in perspective, this can be useful in drawing many poses.

Next lesson:- What is foreshortening in perspective? And how is it different from diminution?