So far, Monoprice 22-inch has proven itself to be a good Wacom Cintiq alternative, it didn’t have as much real problems compared to some of the pen displays I reviewed. Assuming the triangle pen or the bright led are not going to be much of a problem for you. It also featured some good things, like the pen that requires no charging, or how the cables are on the side of it. The stand is very typical to the pen displays we see nowadays, and so having an Ergotron arm can be a plus in case you tend to change your drawing position.

In short, Monoprice 22-inch can provide a good drawing tool for anyone who wants to draw directly on a monitor. 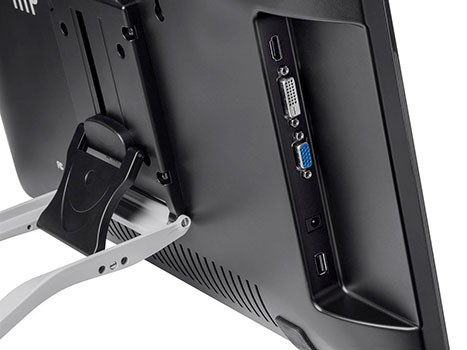 Monoprice 22-inch has a 22-inch display which has a full HD resolution, or 1920 x 1080. Which is the common resolution to see on pen displays with this size, the picture quality the screen provides is good too. One worthy note about the display is that cables in Monoprice 22-inch comes from the side, which makes them easier to manage than the older pen displays I reviewed, which often had cables from below, which could be annoying to manage. The display interfaces Monoprice 22-inch supports are HDMI, DVI-I, and VGA video respectively. 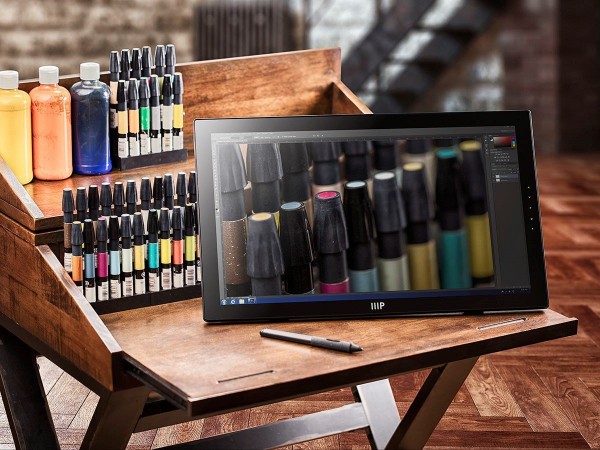 Monoprice 22-inch supports 2048 level of pressure sensitivity. In case this is your first drawing device, this feature allows you to draw thicker lines by pressing harder with the pen, just like pencils & other traditional drawing media works. Pressure sensitivity can be used in other ways too, like creating more or less transparent strokes. The best advice I tell you is not to stress over pressure sensitivity so much, that anything above 1024, and sometimes 512, is more than enough for most of your needs. Some people are happy with pressure sensitivity as low as 256.

Monoprice 22-inch has a glass panel screen, which provides a slippery drawing surface, another thing that’s common among many Cintiq Alternatives. Whether the glass surface is good or bad for drawing is up to your preferences, as some artists like the slippery feeling while drawing. In case you want some textured feeling while you draw, consider adding a screen protector on the top of it. 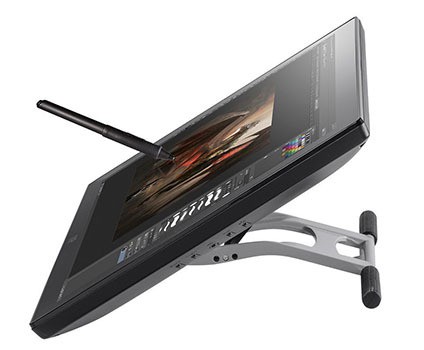 It would have been nice if Monoprice 22-inch had hotkeys you could customize to speed up your workflow, something Wacom Cintiq has, but this is not an issue if you don’t mind having your keyboard nearby to use the shortcuts you want.

Monoprice 22-inch has a low initial activation force, which is the minimum amount of pressure required to create a stroke or dot on the screen, this is a very good thing to have.

Monoprice 22-inch works with many art programs, like Corel programs, Blender, Z-brush, Unity to mention some, and it is likely going to work with many other applications.

You may counter some problems with your Monoprice 22-inch, for one, you may find the cursor is a bit off where you point your pen, but that problem can be solved by calibrating your display.

The first thing you are going to notice about the pen is the triangle-shaped grip it has. Which is weird compared to all the other cylindrical pens you see in graphics tablets nowadays. For the most part, I doubt this is detrimental to drawing, but it is worth noting.

There’s one nice thing about the pen, which is that it is battery-free. And so you’ll never need to charge it or add internal batteries, just like Wacom pens. Almost all the other pen displays I reviewed in this blog required some sort of power source, and most of them are charged from the back of the pen, and for that reason, they never had an eraser at the back of it. Something Monoprice 22-inch’s pen does.

The driver software allows you to adjust the pressure curve, which controls how fast or slow the pen pressure you apply with the pen create bigger strokes, this depends on your drawing style, so it is good to be able to experiment with that.

The pen has two buttons on the side of it, another common feature in pen displays. Unlike some pen displays from other manufacturer, you can customize the pen to do keyboard strokes, like Control + Z for undo & the likes.

You get additional nibs along the pen, as the pen nib tend to wear off from constant use. 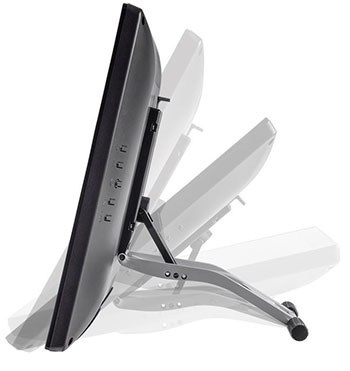 The stand on the back of Monoprice 22-inch allows you to tilt it forward & backward, and so you can tilt it close to flat on your desk. The stand doesn’t allow you to do more than that. But fortunately, you can remove the stand, which reveals a 75mm VESA mount behind of it, that stand is where you can mount an Ergotron arm, which gives you all sorts of flexible positions, to the degree you could draw while you are standing up (depending on your height & the arm’s length). This is very nice feature to have for a drawing device like Monoprice 22-inch, and so I totally recommend you to consider it.

Ergotron doesn’t recommend any certain arm for Monoprice 22-inch by the time of writing this article. But since 75mm is a standard, I don’t think you will have a problem finding a good arm for it. Just make sure the arm you get can hold up your Monoprice 22-inch’s weight.

As long you are find with its cons, and as long you don’t care about features like pen tilt sensitivity. Monoprice 22-inch can be one more choice for those looking for a Wacom Cintiq alternative.

I hope you liked my Monoprice 22-inch review, and see you again in another