Which device is worth getting, Microsoft Surface Studio or Wacom Cintiq 27QHD?

With Microsoft releasing Surface Studio, the all-in-one creative PC with a great design. The first thing that comes to mind is to compare it to Cintiq 27QHD, especially with how the two are very close in price. Some may compare it to the other Cintiq models, like the 22HD & 24HD, even though the latter is a bit outdated.

The purpose of this article is not to convince you to buy a certain device, but to help you make the hard decision between the two based on everything I know about the two, giving the cost, flexibility of the different options & how your drawing experience will be. The other Cintiq models like the 13HD, 22HD & 24HD will be mentioned every now and then, since they are models you could be considering.

I will try to update the comparison the more information I get about the two devices, and particularly the Surface Studio, which is the latest among the two.

From the first look, Surface Studio looks like a large Surface Pro, or a desktop version of it. Its aesthetically pleasing design would look good on the top of your desk. The same goes for Cinitq 27QHD, which I once described as a giant iPad. The choice of the look depends on your taste here.

With The Surface Studio, You Get A Computer For The Same Price

The Surface Studio has one big advantage over Cintiq 27QHD, it offers you a full-fledge computer at a close price (the base specifications are Intel i5, 1TB of storage, 8GB of Ram & 2GB GPU). Unlike the Cintiq 27QHD, which is just a drawing interface, even if you ended up spending a bit more bucks on the Surface (to get more storage or ram for one), you are still getting a lot of value from it (assuming you are fine with the digitizer in it). While you need to own a computer in case of Cinitq.

This is where it matters for most people, since that’s one of the main reason people would opt for any of the two devices.

The Surface Studios screen offers 4500 X 3000 resolution, which is higher than 4K, while the Cintiq 27QHD has 2560 x 1440 screen. If you are very used to Wacom devices, you will need some time to adjust to the Surface Studio, so you need to be patient when it comes to that.

The Surface Studio digitizer has 1024 level of pressure sensitivity, which is less than the 2048

levels Cintiq 27QHD offers. But more than enough to draw well, as many artists can’t tell the difference between 1024 pressure sensitivity & more. Not to mention that other aspects can affect how you draw than pressure sensitivity, like latency & initial activation force, which is the least amount of pressure you need to apply to get the slightest stroke to appear on the screen. And something that improved since the release of Surface Pro 4. There are many Youtube videos showing artists doing amazing things with N-Trig digitizer, many artists liked drawing with it, while others criticized it for its accuracy.

Surface Studio’s screen has the weird aspect ratio for the Surface Pro 3:2, which I see no problem with it, as you will get used to it after some time, unless you want to use it to watch movie, which are not made for that ratio (you will still be able to watch them, but you will get letterboxing while at that).

The hinge on Surface Studio makes it nice to lean forward & draw, you could lean it to 20 degree. While the Cintiq 27QHD can be leaned like that using the built in stand in it, there are not much positions it allows you to use though, unless you opted to get the optional Ergo stand. Many of the other Cintiq models can be tilted in different ways too, the Cintiq 24HD can be tilted in many different ways out of the box just like many Cinitq models allows you too. 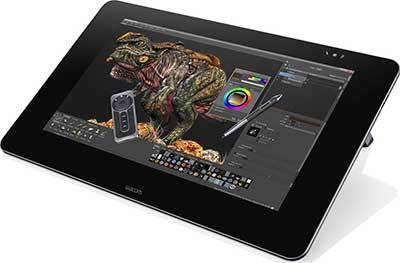 The Surface Studio easily wins over Cintiq 27QHD in this category. The only way the Cintiq 27QHD wins is in case you decided to get an Ergotron arm with it, which gives you worlds of flexibility. You can see the different Ergotron stands for Cintiq 27QHD from the following Amazon links:-

With The Surface Studio, You Get A Computer Too, For A Similar Price To Cintiq 27QHD

The Surface Studio has one big advantage over Cintiq 27QHD, it offers you a full-fledge computer at a close price (the base specifications for it are Intel i5 processor, 1TB of storage, 8GB of Ram & 2GB GPU). Unlike the Cintiq 27QHD, which is just a drawing device, even if you ended up spending a bit more bucks on the Surface (to get more storage or ram for one), you are still getting a lot of value from it (assuming you are fine with the digitizer in it). While you need to own a computer in case of Cinitq.

If You Want To Work On The Go, The Cintiq 13HD Is A Good Choice

While I just mentioned that Surface Studio is a full-fledged computer, you may still need to work on the go on your laptop while you are moving. Carrying around the Surface Studio is not feasible, and so goes for Cintiq 27QHD. But at least with the Cinitq, you can opt to get the Cintiq 13HD, which you could plug into both your computer & laptop. The cost of that may be higher than just getting the Surface Studio on its own, but the flexibility of your working environment may be worth it for you.

You could also get the Wacom Studio Pro, or the older Cintiq Companion 2, which allows you to draw on the go without the need to connect them to any computer (they give that option in case you need it).

If You Already Own A Powerful Computer, Then Getting A Chapter Cintiq Model Is More Feasible

If you already own a powerful computer, then paying the full price for the Surface Studio may not be feasible, since all you need is a pen display. You could save a lot by opting to get some of the less costly Cintiq models, while keeping your computer, which could be a desktop with more upgrade options than Surface Studio.

If the computer you own is a Mac, then that’s a good reason to get the Cintiq, which is what I am talking about next.

If You Are A Mac User, The Cintiq Is Your Only Option

Unlike Surface Studio, the Cintiq can be plugged into any computer you own, this includes Mac computer, if you prefer to use MacOs, then the Cintiq is your only choice, unless you are willing to migrate to Windows.

You could also use many of Wacom models with Linux if you prefer that OS, though that may be possible with the Surface Studio in the future.

In case you are fine with drawing on the huge displays both Surface Studio & Cintiq 27QHD offer. Then choosing between them depends on the other points I mentioned in this comparison. In case you want a smaller screen size, then Cintiq offers smaller options, like 24-inches(which is a heavy model by the way), 22-inches & 13-inches.

If we counted the Cintiq Studio, then you have the option of getting a full-fledged computer with 13-inches & 16-inches. 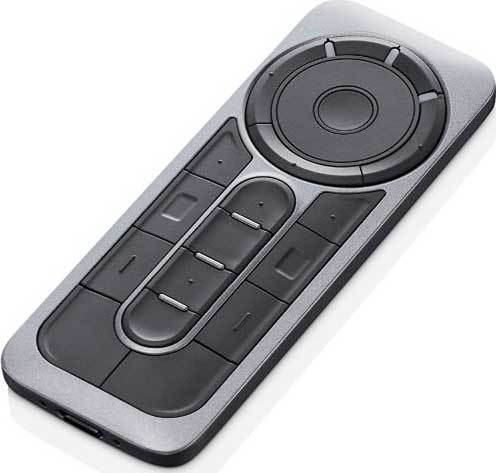 The Surface Studio supports the dial, which is like a Physical Radial menu. It allows you to do application-specific functions, like resizing your brush & other things. The idea for the dial is very innovative, thought it may be cumbersome to use compared to the radial menu (there’s a digital menu you could use on-screen in case you want that), but it is worth trying if you have someone who has it. The Cintiq 27QHD comes with Expresskey remote (the one on the picture on the right), which has 17 buttons plus touch ring, which work similar to the dial in a way, but you could hold it on your hand or place it on the top of your Cintiq 27QHD. The dial is sold desperately, while the Cintiq remote comes with it out of the box.

To see Microsoft Dial on action, check out this video:-

While a lot of creatives people are not planning to move to the Surface Studio, according to this Engadget article. It could be a great creativity machine for you, especially if you already like the Surface Pro 4’s digitizer. Wacom is still the market leader & the go-to when it comes to digital art, their devices are very reliable & provide good drawing capabilities. So you will get a good device no matter which one you choose. I hope this article has helped you choose the best device for you among them.