MakerBot Replicator Mini is a very high maintenance printer that can cost you a lot. The only main advantage of it is its compact size. But besides that, it can be a hassle to deal with. Thanks to the smart extruder issue.

MakerBot Replicator Mini supports PLA filament type only, which makes it unsuitable for those who want to use more than one type of materials. 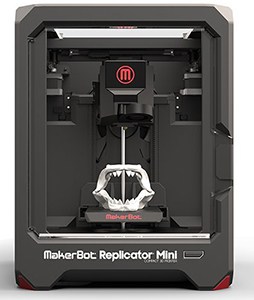 MakerBot Replicator Mini is a small 3D printer that comes pre-assembled, which mean you won’t have to assemble it yourself, something that is convenient if you want to print objects faster.

When it comes to looks, MakerBot Replicator Mini’s design it pretty neat, there is glass door in the front, which you can open to access the printing area. On the top of the printer, there is no cover there, but besides that, it is fully enclosed printer. And inside the enclosed design, there is a camera that allows you to monitor from anywhere as long you are connected to your Wi-Fi network. So you can leave the printer in your garage, and still watch your object prints when you are in the kitchen. Giving how loud MakerBot Replicator Mini is, I am sure you will appreciate how you won’t have to stay close it to when it prints. :>

Giving how easy it is to set up MakerBot Replicator Mini, this review won’t contain a set up section. And so we will go straight to printing. 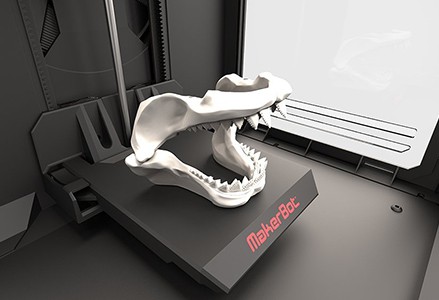 When it comes to printing, MakerBot Replicator Mini provides okay printing quality. It supports printing resolution up to 100 micron. This represents how accurate the printing is, and the lower the number, the higher the accuracy will be, but the slower it will take to print it. One problem with MakerBot Replicator Mini is that you will pretty much need to print with a draft (a printed base onto which the object is printed), which mean you will have to go through the hassle of removing the raft every time you print an object. Many of the other 3D printers I reviewed doesn’t require that. 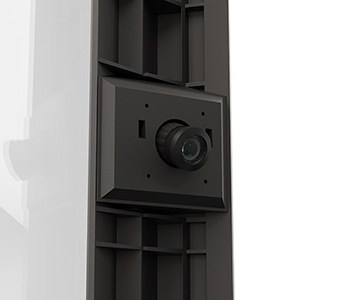 When it comes to noise, MakerBot Replicator Mini is a pretty loud printer, which again makes having the internal camera a heaven-sent feature in case you don’t want to be around it when it prints.

MakerBot Replicator Mini only supports printing with PLA filament. In case you are not familiar with 3D printing materials, there are many, but two common materials are PLA & ABS. PLA is made from corn starch, which makes it very environmentally friendly, it also makes it smells nice when heated & melted, though the final object is less sturdy compared to the objects made by ABS filament.

ABS filament, on the other hand, needs higher temperature to melt than PLA, and it tends to smell bad for some people.

Given how MakerBot Replicator Mini is a small printer, and that the filament spool fits inside the printer. using the bigger filament spools can be a hassle, as you will have to create your own solution to put the filament outside your 3D printer or something.

To print files, MakerBot Replicator Mini comes with MakerBot Desktop software, where you can Zoom, rotate & resize your model before printing it. It contains more options compared to XYZ Ware, like changing infill of your prints & controlling the extruder temperature.

PrintShop, create objects and modify them from templates

Create Your Own 3D Models With Makerbot Printshop

The Makerbot printshop is a pretty neat app that allows you to create your own 3D objects. While it surely won’t replace the need to learn how to model in 3D in case you are very serious about 3D designing, it is still a great addition if you own a Makerbot printer.

There are many things Makerbot printshop allows you to do, for one, you can use the TypeMaker type text & turn it into 3D & print it. You can type pretty much anything you want this way.

Another nifty feature in Makerbot printshop, is the shape maker (ShapeMaker). It allows you to take a picture of your sketch, use a slider to determine how the App will interpret your sketch. And once you determine how much depth your object will have, you can print it.

Here is a video on how Makerbot printshop works in action:-

Generally speaking, MakerBot Replicator Mini doesn’t provide a good value for the money. It was intended to be a good small 3D printer for education. But giving the problems with the smart extruder, it didn’t turn out well. The smart extruder idea in itself is pretty neat, which makes it a shame it didn’t work well.

I would only recommend MakerBot Replicator Mini if you want are looking for compact 3D primer, but even then. Some research could bring you a better option.

I hope you liked my MakerBot Replicator Mini review, and see you again in another review. ^^