Lenovo ThinkPad Tablet 2 is a great alternative for the Surface Pro, it is lightweight enough to be carried around throughout the day, and its long battery life, which can reach 10 hours adds to its portability. It has everything you need to do all sorts of simple tasks, from reading books, browsing the Internet, to even drawing & create some artworks on it, especially if you plant to practice or create simple things.

Lenovo ThinkPad Tablet 2 can also be used as an affordable Wacom Cintiq alternative, as the digitizer in it is from Wacom itself.

Bear in mind that one of the reasons Lenovo ThinkPad Tablet 2 is that affordable is that it is old tablet, but one that is worth looking for in this blog.

For a starter, let’s take a look at the main specifications, Lenovo ThinkPad Tablet 2 has 2 GB ram, since the memory is not upgradable, so you are going to stuck with it. This is fine in case you plan to use it for what it was intended for, which is simple tasks, like browsing, reading books, checking E-Mail, as well as various amount of Simple tasks.

When it comes to battery life, Lenovo ThinkPad Tablet 2 has around 10 hours battery, which is great to last you a whole working day. That’s not surprising, giving how Lenovo ThinkPad Tablet 2 comes equipped with 1.8 GHz Atom Z670. Atom processors are ultra-low voltage from Intel that are designed specifically to draw less power than normal ones. Though they have the advantage of being less powerful than the normal processors.

The weight is one of the good advantages of Lenovo ThinkPad Tablet 2, which is around 1.3 pounds, which is very light, it may not be as light as the iPad, but it is pretty light for a Windows machine that can do a lot. It is worth noting that the version of Windows installed in this tablet is the 32-bit of Windows, so it won’t be able to run 64-bit applications, so check out if the applications you use has a 32-bit version before buying. Even with that limitation, there are a lot of 32-bit applications that can do all sorts of things at the time of writing this article.

When it comes to storage, Lenovo ThinkPad Tablet 2 has 64GB of internal memory, that is a little tight for a Windows computer, removing the bloatware that comes installed out of the box will free some space for you. Fortunately, you can get some additional storage if you used the Micro SD card slot, something I will talk about later in this review. 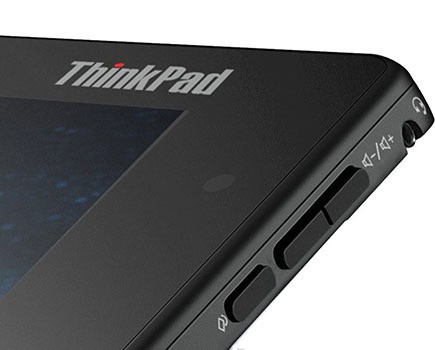 Lenovo ThinkPad Tablet 2 comes with a 10.1 inches screen that considered low resolution, the resolution is 1366 X 768, which is a little bit over 720P, this can be both good & bad, it is bad because having a full HD screen may be nice for activities like watching movies & the like, but it is also good because it may help with battery life. One big advantage of having relatively low resolution screen is how the icons tends to be bigger in such screens, which make pointing or using touch features easier, especially on such a small screen. In additional to that, the availability of a stylus makes it easier to select things on the screen as well.

A little & nice feature in Lenovo ThinkPad Tablet 2 is the Screen rotation lock button on the side of it, which is very handy to have on any tablet.

The fact that Lenovo ThinkPad Tablet 2 comes equipped with Wacom digitizer pretty much means you could use it for drawing & creating artwork, especially if you already used to Wacom graphics tablets, it may not have the exact specifications of a Cintiq, but it is still a good choice that is relatively affordable.

Lenovo ThinkPad Tablet 2 supports 1024 level of pressure sensitivity, a feature that allows you to vary the thickness of your strokes based on how much you pressure on the drawing surface. 1024 is more than enough for the majority of people, so no need to stress over it.

One of the common issues with Wacom digitizer, and one that exists in Lenovo ThinkPad Tablet 2’s digitizer, is parallax. Parallax is a misalignment between the pen position & the cursor, the issue is not that bad at the center of the drawing surface, but it can be more obvious near the edges

It is worth mentioning that the stylus that comes with Lenovo ThinkPad Tablet 2 has no eraser at the back of it.

Now let’s talk about the art applications you can run with Lenovo ThinkPad Tablet 2, I will mostly base my comparison based on the amount of ram memory needed, but the actual performance totally depends on what you plan to work on, as the atom processor of this tablet won’t be able to handle all art creating tasks.

With only 2GB, and with no ability to upgrade at all, you are limited when it comes to the drawing applications to use with Lenovo ThinkPad Tablet 2, you can certainly use Photoshop for light tasks (Photoshop needs 2GB of ram as minimum), or for editing small pictures, as well as sketching, it can also run Adobe Illustrator in case you want to create some lineart & all (It needs 1 GB of ram). But don’t expect you will be able to work on big projects on this tablet, at least not easily.

Another option you can use with Lenovo ThinkPad Tablet 2 is Sketchbook Pro, which also needs 1GB of ram, as well as a 1 GHZ, which is below the specifications of our tablet here.

If you are flexible with the art program you use, then some of the lightweight art applications can easily run on Lenovo ThinkPad Tablet 2 & turn it into an affordable Wacom Cintiq, these applications requires much less system resources than the ones mentioned above, and so they can help you utilize your Lenovo ThinkPad Tablet 2 for artwork creation. The first one is GIMP, the free Photoshop alternative, it only requires 256MB of ram, making it an easy choice to use with this tablet, the second one of Paint Tool Sai, which requires 1GB of ram, but it doesn’t need much processing power, making it a nice application to use on atom-based computers.

When it comes to peripherals, Lenovo ThinkPad Tablet 2 has a full USB ports, which you can use to connect a variety of devices, this is pretty much one of the advantages of using a Windows tablet. It is worth mentioning that the USB port can’t supply much power to your devices by itself, so don’t expect it to be able to run devices like an external HDD.

Lenovo ThinkPad Tablet 2 has a Mini HDMI port, which allows you to hook your tablet to an external monitor in case you wanted to work bigger, this, and along with the USB port, allows you to turn Lenovo ThinkPad Tablet 2 into a mini computer to work on. The only gripe I have about the mini-HDMI port is how it is located at the bottom of the device, so using it with the keyboard accessory from Lenovo can be cumbersome.

For an additional storage Lenovo ThinkPad Tablet 2 has a micro SD slot, which allows you to insert cards with up to 32 GB of storage, that will partly solve the problem of the lack of space in this tablet.

Mini USB charger, which makes charging your Lenovo ThinkPad Tablet 2 much easier using many of the chargers you already own, assuming the charger can provide enough power for that,

Lenovo ThinkPad Tablet 2 has two cameras, one on the front, which you could use for Skype or conference calls, and a rear one for taking picture. The rear camera has an integrated flash as well, so it can be used to take some pictures, though the quality of the pictures don’t compare to professional digital cameras, they are still good.

If you are looking for an affordable Windows tablet to use for simple tasks, as well as light work, or if you want a small portable device to use for drawing. Lenovo ThinkPad Tablet 2 can be a great choice in both cases, especially with how long the battery life is. It may be a bit old right now, but that’s one of the reasons that makes it affordable.

I hope you liked my Lenovo ThinkPad Tablet 2 review, and see you again in another review. ^^