Kamvas Pro 22 is a nice example of how Huion pen displays kept improving over the year. I followed their brand for years now, and they easily offer a valid option to those who can’t afford to buy a Ciniq. This model continues with offering a battery-free pen, a convenient feature Wacom users enjoyed for years. It also supported tilt sensitivity, which is one more tool to help you create good art. Above that, it has a laminated display, something that reduces parallax. Having more color gamut is another nice addition to the previous Kamvas Pro 22 model.

Kamvas Pro 22 doesn’t lack it when it comes to hot keys, as you get 10 of them on each side. As well as touch stripes to help you zoom in and out and do other similar functions.

The larger Huion devices has always been generous in supporting all sorts of common display ports. Including the very old VGA, as well as DVI. It also supports HDMI, which makes it compatible with all the computers I can imagine (you will need a cheap adapter if you don’t have any of these ports).

Kamvas Pro 22 also offers all the features we see in similar pen displays, like the stand and the ability to mount it to anything that supports VESA mount. It works with all sorts of art programs, so there’s no need to worry about yours not working.

In short, you won’t go wrong with getting this device. You may encounter some annoying driver issues when you install it for the same time. For that reason, I added some common tips that will hopefully help you with these issues at the bottom of this review.

You can buy and check Kamvas Pro 22’s price in the following Amazon & eBay links:-
#CommissionsEarned 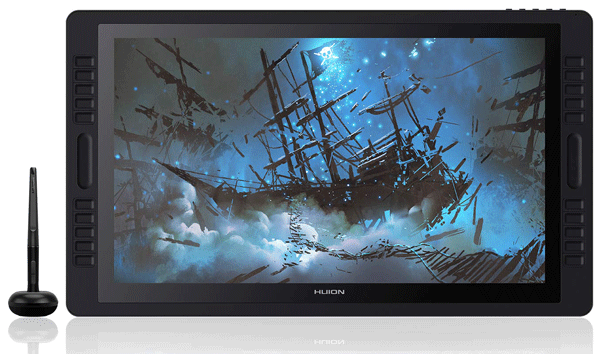 Kamvas Pro 22 comes with a standard resolution of 1920 X 1080, which is very typical in pen displays & monitors these days. Drawing on this resolution is enough for many artists, but some may prefer to have higher resolution for 4K, specially on a screen this size. So far, only Wacom produces pen displays with that resolution (Dell Kamvas has QHD resolution, for example).

I would love to see the day Huion & other Wacom competitors make a pen display with a higher resolution than 1080P, like 2K or even 4K. I believe that will happen in the future, but it seems it’s happening so slowly. If you’re getting a pen display for the first time, resolution may be less of an issue, but I thought I had to make a little comparison, to give you an idea on what’s out there.

Let’s take a look at the color gamut of the screen, which is the color range the screen can display. The color gamut is 120% sRGB, that’s a good improvement from the 100% sRGB the previous model had. The colors look good on it, specially after you adjust it, but it may not be enough to create work professionally, where accurate colors is a must. Generally speaking, the color gamut of Kamvas Pro 22’s screen is one of the aspect that Huion & other Cintiq alternatives makers are behind on. If you plan on using another monitor to check colors, or if colors aren’t super important to your work (like you create sketches or comics) you will be fine with the color gamut here.

Kamvas Pro 22 supports the 3 most common display ports:- VGA, DVI & HDMI. That means it will work on any computer you have. Of course, if your computer doesn’t have any of these ports, like if you have one of the most recent Apple Macbooks that only have USB-C port, you will need an adapter. That’s the same if you have a graphics card with none of these ports (Most modern graphics cards have at least one HDMI port).

One of the things I like about the ports is their placement, which is on the side of Kamvas Pro 22. I say this because many of the other pen displays I wrote about had the ports at the bottom, which made it harder to tilt it to a semi-flat position. That issue made me write a little guide on how to deal with it.

Another nice thing about cables is that they don’t require you to have a 3-in-1 cable, which can be so convenient, but is not as easy to replace if it ever got damaged (Huion sell replacement cables, but replacing standard HDMI cables it much easier). 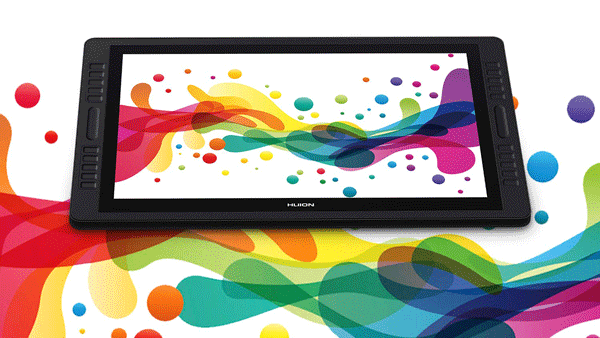 Kamvas Pro 22 offers 8192 levels of pressure sensitivity, the norm these days. If you read this blog regularly, you will know that I don’t consider high pressure sensitivity important. Mostly because the levels you can actually use are much less than 8192.

What is pressure sensitivty? Pressure sensitivity is a feature that allows you to create thinner or thicker lines based on the amount of pressure you place on the pen while drawing, it works just like traditional pencils. But it can be more flexible, as it can also be used to control brush opacity and other things, depending on what your art program allows. You can read more about pressure sensitivity in my post here.

Kamvas Pro 22 also tilt sensitivity, which is similar to pressure sensitivty, but varies the brush stroke based on how you tilt the brush. It’s much less used than pressure, and some artists don’t even use it, but it’s nice to have. For many years, tilt sensivity was an exclusive feature to Wacom for the most part, with few exceptions here and there.

Because Kamvas Pro 22’s screen is laminated, parallax is reduced. Which makes drawing with it easier. This is something that Kamvas Pro 22 has while Cintiq 22 (Reviewed here) happened to lack.

What is parallax? Parallax is a slight offset between the pen tip and the strokes you draw on the screen. This offset is often caused by the distance between the pen tip and the digitizer. The thicker the screen, the more the parallax that can occurs. That’s why laminated displays, like the one Kamvas Pro 22 has, tend to have less parallax. It’s worth noting that parallax can be especially noticeable near the screen edges. Calibrating the display can lower parallax, so make sure you do that. While Parallax can make it hard to draw, you actually get used to it after using Kamvas Pro 22 for a while.

The screen can get slightly warm while drawing, but that’s very common in pen displays.

Kamvas Pro 22 has 10 hot keys, as well as a touch stripe on each side. That’s makes it a total of 20 keys and two touch stripes. Since you will be holding the pen with one hand while drawing, you are more likely going to use 10 hot keys and one of the touch stripes, so I will count them as that.

These hot keys can be customized to do all sorts of keyboard shortcut, which could eliminate the need to use the keyboard in case you don’t need many shortcuts. Many artists prefer to use the keyboard, even with the presence of such keys (some artists dislike them, actually).

Some of the stuff you could assign to the hot keys are:-

Kamvas Pro 22’s pen is battery-free, and doesn’t require a battery to work. Most of the older Huion pens required to be charged using the cable it comes with. That wasn’t a huge issue, since the battery lasted for a long time, but it’s nice to see another Wacom-only feature find its way to Huion products, as more convenience to the artists is always better.

In my Why are Wacom graphics tablets & products very expensive?, I predicted that was going to happen. Because the patents that allows only Wacom create such pens have expired (unless Huion is using a totally different technology).

As with the case with almost all drawing pens, the pen has two buttons on the side of it, which can be customized the same way as the hot keys.

Despite the fact the pen doesn’t require charging, it has no eraser on the back of it. Older versions of the pen requried that you plug a cable to the back of the pen to charge it, so Huion pens never had an eraser there.

The pen comes with 10 spare nibs, so you could replace the nib once if wears down from use (to avoid scratching the screen surface). You can read more about this in my following post, which applies to Huion devices as well:-

Kamvas Pro 22 comes with an adjustable stand. Which allows you to tilt it forward and backward. The stand is sturdy and stays in place. It’s one of the things I quite like about Cintiq alternatives. Even Wacom started to use it in their Cintiq 16 & Cintiq 22.

In case the stand is not adequate to you, you can remove it. Which reveals a VESA mount. Which allows you to mount an monitor arm instead. Something I recommend you do if you working space allows you too. Not only it allows you to adjust the position of your Kamvas Pro 22, but it allows you to rotate it and move it around so freely. It can be a bless to have such flexibility in your drawing surface.

You can take a look at the various VESA arms here on Amazon & eBay:-
#CommissionsEarned

One of the things that can be quite annoying about Huion devices, and pen displays in general, including the ones from Wacom, is the driver issues. Which can be quite a pain to fix. Fortunately, most of the time, you will have to deal with these issues once. After that, you will be able to use your device for a long time without having any issues.

Here are some common tips that will hopefully help you with these problems:-

If you have more than one monitor, and the cursor appears on different monitor than Kamvas Pro 22. Check out the following guide to help you fix that:-

In case you’re reading this review while looking for a pen display to buy, you may be wondering whether you should buy Kamvas Pro 22, or get yourself the new Cintiq 22 (reviewed here).

I plan to write a more detailed comparison between the two, but from what I saw, here’s a quick comparison:-

As you can see, Despite the fact it came few months prior to the Cintiq, Kamvas Pro 22 has some advantages when it comes to features. And it provide you with that for a lower price too.

A Final Word On Kamvas Pro 22

Huion made some great strides with their pen displays in the last few years. I won’t be surprised if they went head-to-head with Wacom if this kept on. Something that will help us consumers.

If you can’t afford to get one of the larger Cintiq models, you won’t go wrong by getting yourself Kamvas Pro 22. It offers what most artists need, and in some cases, more than that. Just make sure the things I mentioned about colors are not important to you (or that you have another monitor to compare colors with).

If you don’t think that Kamvas Pro 22 is up to what you’re looking for, then I suggest you look for my Affordable Cintiq Alternatives to buy post.

You can buy and check Kamvas Pro 22’s price in the following Amazon & eBay links:-
#CommissionsEarned

I hope you liked my Kamvas Pro 22 review, and see you again in another review. Please subscribe to my newsletter for updates about new posts & promotions:-