The very first thing to catch your attention about Inspiroy Keydial KD200 is the half-keyboard on the side. All the keys you will likely need for keyboard shortcuts, including the modifier keys & the keys for resizing the brush. Having additional programmable keys & a dial means that you could compensate for any shortcut you may need. The drawing area is big enough for most needs. I classify it as a medium-sized tablet.

All in all, I am quite happy we got to see some innovation in graphics tablets, specially giving how no tablet with hot keys could completely easily replace the keyboard for serious work.

For convenience, you could connect Inspiroy Keydial KD200 wirelessly to your computer. Either using Bluetooth or a USB dongle, whatever works best for you. You still have the option to connect it to your computer via USB cable if you so want.

Or in Amazon :-
#CommissionsEarned 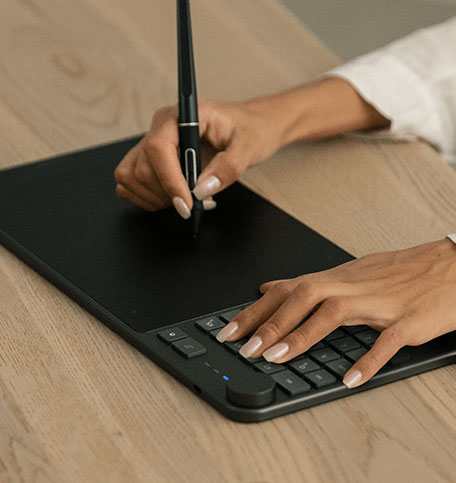 Inspiroy Keydial KD200 has an active drawing area of 8.9×5.6 inch, which makes it a medium-sized tablet. That size is ideal for most artists. For more about the different graphic tablet sizes, you can check out my dedicated article about it here:- What graphics tablet size to get? Including Small VS Medium VS Large size comparison

The drawing surface itself is textured. Meaning it makes fraction with the pen tip. That has the advantage or allowing you to draw more accurately, as it makes drawing slowly easier. Some artists don’t like such surface, as it could ruin the nibs faster, or because they would prefer slippery drawing surfaces. The right kind of surface you should get depends entirely on your preferences. If you plan on getting Inspiroy Keydial KD200 as your first tablet, then textured surface will be the first you try.

You Can Still Use USB Cable

While Inspiroy Keydial KD200’s wireless connectivity is nice & all, you aren’t really forced to use it. You can still connect it directly via USB cable. This is handy in case the battery died out, or for some reason, the wireless feature didn’t work as it was supposed to.

Inspiroy Keydial KD200 comes with the PW517 battery-free pen. That pen doesn’t need any charging or a battery. The pen has the standard features you would expect from a graphics tablet pen, like the two buttons on the side, which you could program using the driver. 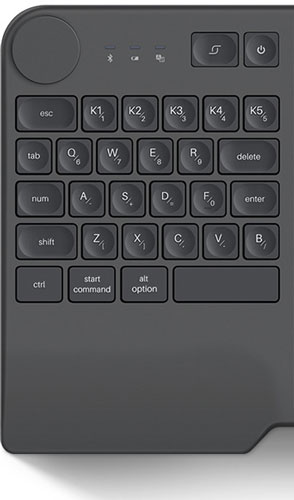 In almost many of my graphics tablets reviews I wrote, I almost always praised the keyboard as the ultimate shortcut inputting method. Even though I like hot keys & tend to considered having many of them a pro for the most part, there’s a limit to what you can do with these keys. Having a half keyboard built on the tablet itself means that you could input many, many shortcuts from the tablet.

Inspiroy Keydial KD200 only has the left side of the keyboard. It’s equivalent to having a graphics tablet with a half keyboard besides it, except that you also get other keys like Enter & Delete. It also gives you access to other keys like the [ or ] keys, which are commonly used for resizing the brush.

Here’s the thing, since the keyboard doesn’t really has all the keys, you can’t use it to name your layers (if you’re the kind who does that). In that case, you need to have an actual keyboard nearby just for that.

If you’re picky about the kind of keyboard you use, and here I am looking at you mechanical keyboards fanatics XD, then you may not like the membrane feeling of the keys. And you may be better off with using your own keyboard with a regular graphics tablet.

One thing you may miss from having a full-sized keyboard is the ability to rename your layers, so if you’re the kind that does that often, then you may still need to keep a keyboard around just in case.

Hot Keys:- Yes, It Has Those

Besides the half keyboard integrated on Inspiroy Keydial KD200 itself. There’s a dial and hot keys you could program to do any additional shortcuts you use a lot. The dial can be used to zoom in & out the canvas. It’s is the reason for the word “dial” in the tablet name.

I was quite impressed to know about Inspiroy Keydial KD200. I hope we get to see more innovative graphics tablet designs like that in the future. Who knows what we will get in the future, graphics tablets with better keyboards? The chance to pick your own switch type (I prefer red switches), or what? Let’s wait & see.

Or in Amazon :-
#CommissionsEarned