Huion DWH69 is a very affordable graphics tablet that supports wireless. a feature that as been almost exclusive to Wacom tablets for the most part, but Huion seems like it is trying to catch up. And it did it with this graphics tablet.
Besides the wireless, Huion DWH69 is a decent graphics tablet so far, with 2048 level of pressure sensitivity, 8 customisable express key, wide active working area. And a cute screen on the side that shows you the battery status & whether the tablet is in wireless or USB mode (besides a few other things). And in short, I consider it one of the best Huion graphics tablets I reviewed so far.

The first thing that deserves mentioning in Huion DWH69 is the wireless feature, which is the most key new feature in this graphics tablet. So far, Wireless was an exclusive feature to Wacom graphics tablets for the most part. But Huion seems like it is trying to catch up to Wacom with this tablet. Wireless is one of these feature you won’t like until you try it, while it is not a necessity for creating great artworks, it makes it more comfortable being able to lean backward and draw.
Now let’s talk to about the specifications, Huion DWH69 has 2048 level of pressure sensitivity, which is the typical amount of sensitivity in graphics tablet these days. And it will give you a good flexibility in varying the thickness or opacity of your strokes depending on how much you press on the tablet surface. But bear in mind that your art program has to support that feature in order to benefit from that.
The active area of Huion DWH69 is 9 x 6 Inches, which is very good, and it is likely to work well for you with various screen sizes, unless you want much more controls over your lines, which may require to get a bigger tablet.
Huion DWH69  has 8 customizable express keys, which you can customise to do the tasks you do often, like switching to a certain tool, or opening a certain filter, depending on your needs. 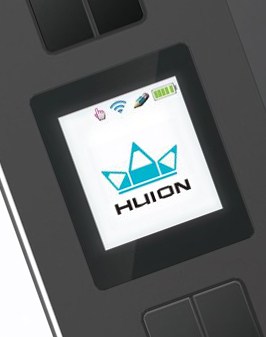 Huion DWH69  comes with a rechargeable pen, which doesn’t require any external battery to work, which is a plus.
There are two buttons on the side of pen, which can be customised using the driver software to do more common functions for you, like switching to the eraser, or triggering undo/redo very quickly.
As it is the case with many graphics tablets these days, Huion DWH69 comes with a pen holder, which contains 4 replacement nibs inside of it. In case you are new to graphics tablets & pen nibs, using the tablet tend to wear the nib of the pen after some time, depending on the tablet model and how much you press on the tablet while you work. Which will requires you to change the nib so that it won’t scratch the tablet and thus damage it.
In case you ever needed more nibs after that, you can always order more nibs, but the 5 you will get with Huion DWH69 are likely last you for quite some time I guess.

The user manual that comes with Huion DWH69 , while it is not perfect, it deserves some praise here. So far the manuals that shipped with Huion graphics tablets have not been good, especially with how the manual displays pictures of another tablet than the one you got. This is not the case with Huion DWH69’s  manual, which displays actual pictures of Huion DWH69 this time around. So Kudo for Huion for trying to improve their manuals. And let’s hope they improve upon them even more in the future.

Instructions to avoid falling into problems with your Huion graphics tablet. 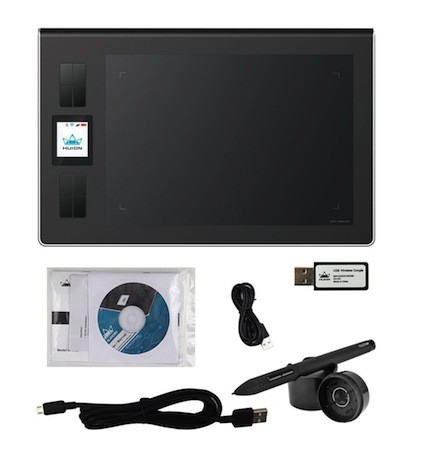 Huion DWH69  is a very nice & obvious option if you are looking for an affordable graphics tablet that features wireless connectivity. And besides wireless, it supports many good other features & specifications. Which makes me think it will be a popular choice among artists.