In my Two-Points-Perspective lesson, I showed you the steps to draw a cube in perspective. The thing is, these steps don’t produce perfect cubes, where all the sides are equal in size. That’s fine for the most part, since one would only need to draw a perfect cube in certain cases. But you may still be wondering how to draw such a cube, for in case you ever needed that.

In essence, drawing a perfect cube is the same as drawing one in Two-Points-Perspective, but with additional steps to make sure all the cube sides are identical in size, and are placed right in perspective.

I recommend you go to my previous lesson about drawing a cube in Two-Points-Perspective if you are not familiar with it. It will make following the steps here easier, but you can follow the steps here on their own too.

To make this tutorial easier to follow. I have added many additional steps, so that you could focus on understanding the steps & nothing more.

Drawing A Perfect Cube In Two-Points-Perspective 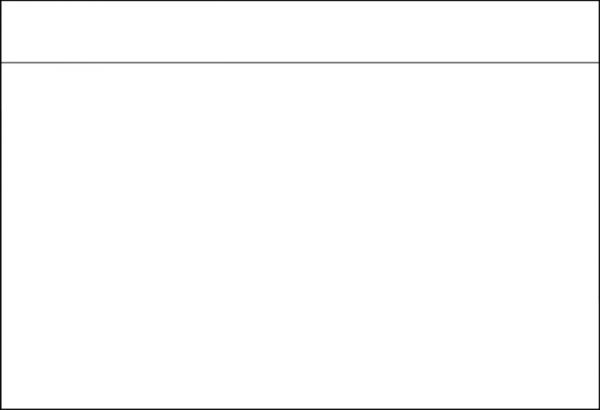 Next we place the two vanishing points on the horizontal line. I placed them each side of the horizon line. Mainly to give us more drawing space for this tutorial. 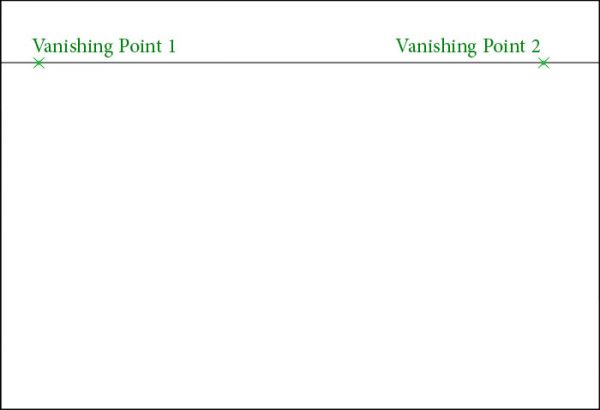 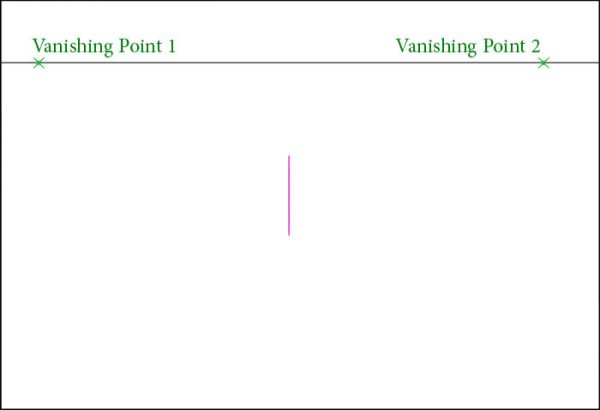 No, let’s draw two lines from each vanishing points to both ends of the edge we just drew:- 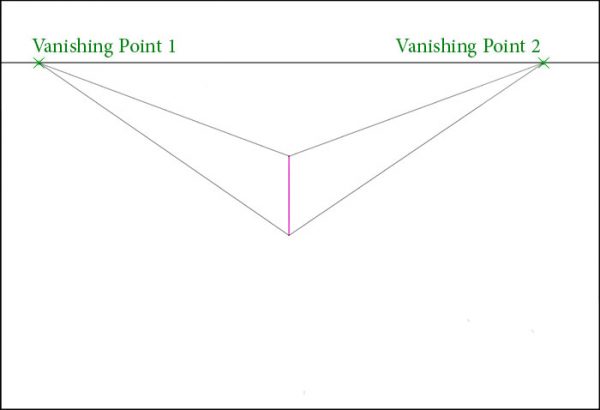 So far, the steps we took are identical to the ones we took when we drew cc as drawing a cube in Two-Points-Perspective.

Here’s where things start to change. If we are to continue the same way we did back then, we are going to place the other two edges, like this:- 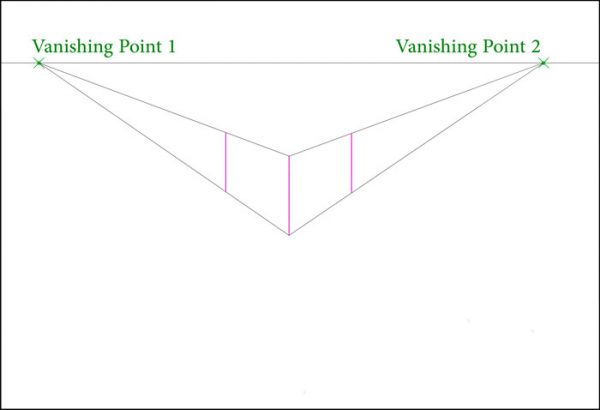 The issue here is, how are we going to place these two lines so that the cube sides are all equal? To achieve that, we need some additional steps. So let’s take a step back and start doing that.

For a starter, let’s draw two lines from the two vanishing points. These two lines are drawn so that they make a 90° angle where they meet. If you are drawing on paper, a triangle ruler can help you draw it. In Photoshop, I simply drew a right angle, then placed it the way you see below using The Free Transform Tool.

I made sure the each side of the angle has a different color to make the following steps of the tutorial easier to follow:- 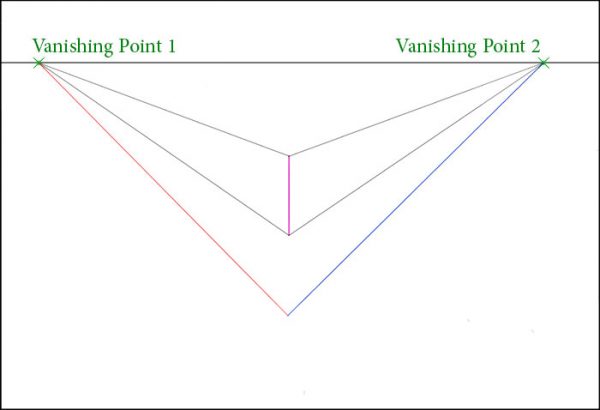 Now, let’s draw a line that starts from vanishing point 1. The length of that line is equal to the red line we drew in the last step 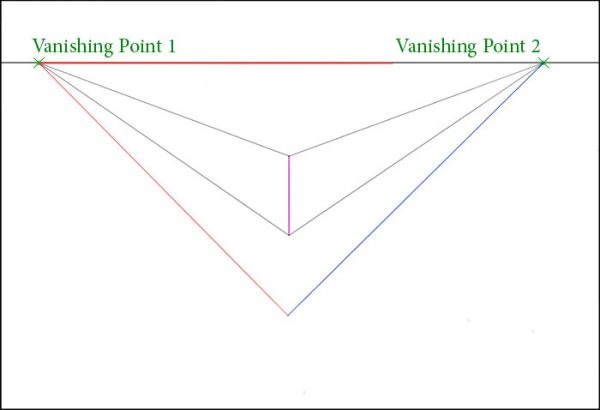 You can measure the length of the two lines using a ruler if you like. Each of the red lines is about 20.3 CM in my case:- 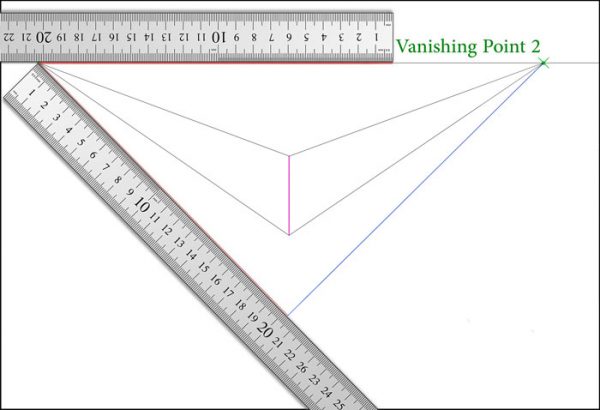 Mark a point where the new red line ends:- 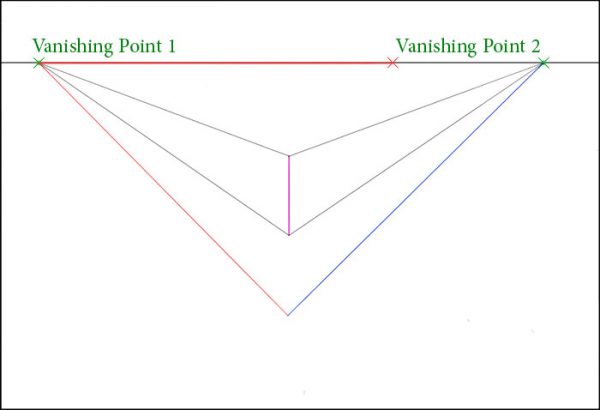 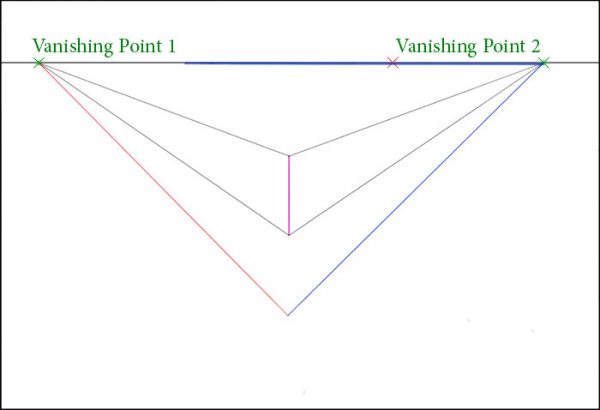 Let’s mark the point where the blue line ends:- 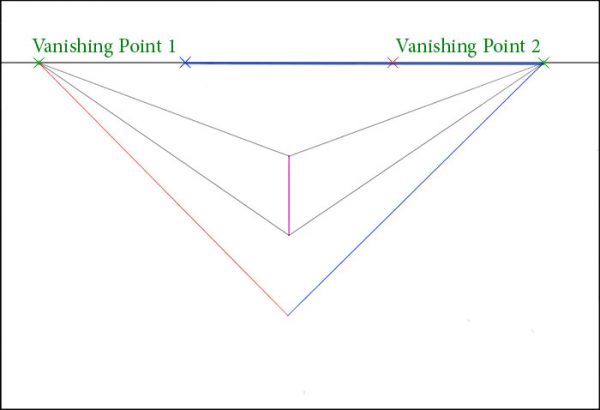 We will use these two points later on. For the time being, we still need more lines to help us draw the other edges of the cube. 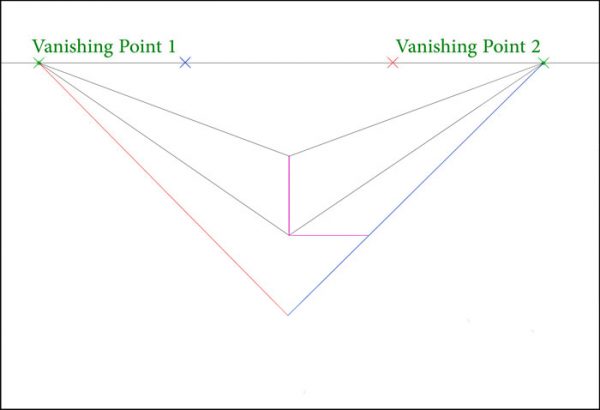 This line has the exact same length as the vertical purple line (4.6 CM in this case, but the length itself doesn’t matter):-

Draw another line the same way, but in the other direction:- 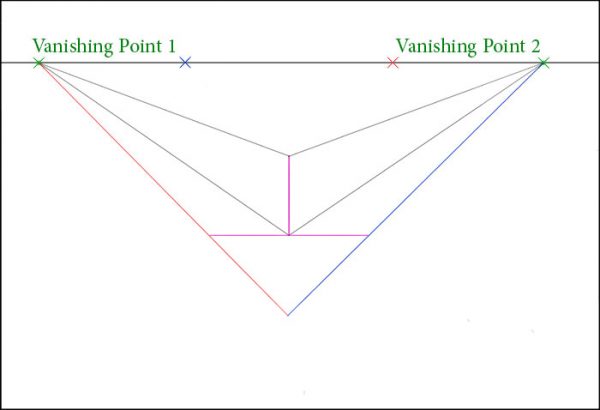 Now, it’s time to determine where the other edges of the cube are. For a starter, draw a line from the red point we marked earlier to the end of the horizontal purple line:- 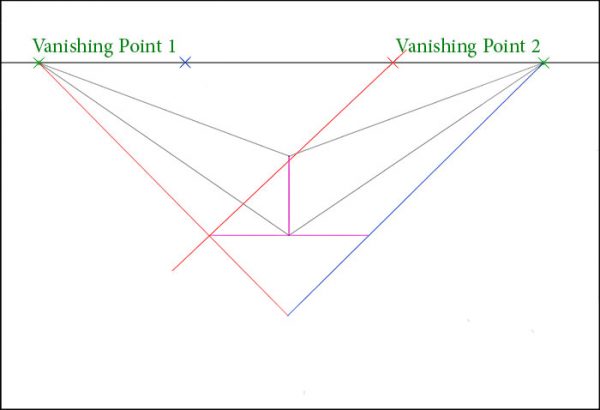 Mark the point where the line crosses the black line that comes out of the vanishing point to the bottom corner of the cube. This is where the edge of the cube is going to be:- 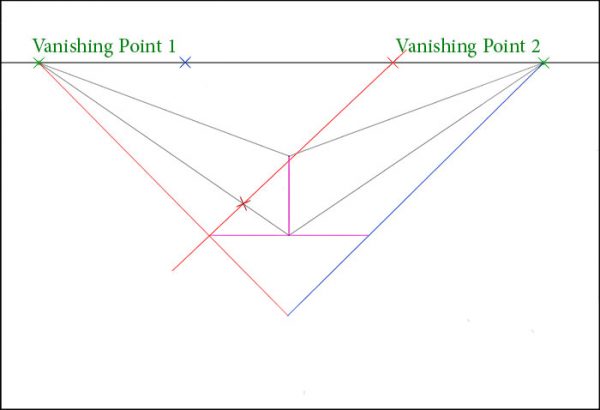 To determine the other edge of the cube, let’s repeat the same steps. We draw a line from the blue point to the end of the other horizontal line:- 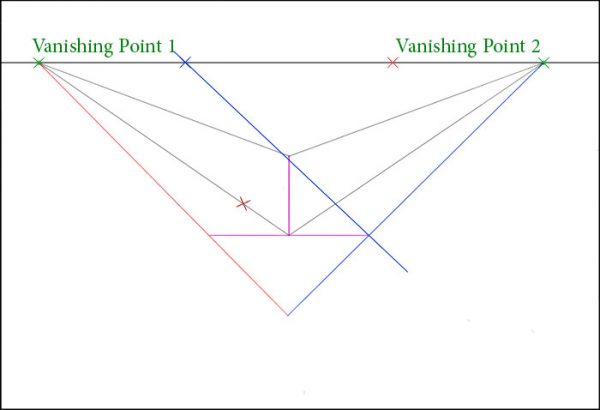 Then we mark the point the same way too:- 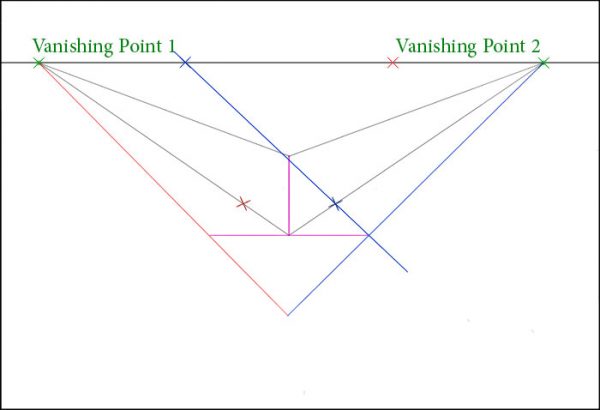 All that’s left is to draw the edges of the cube using the two points we just marked:- 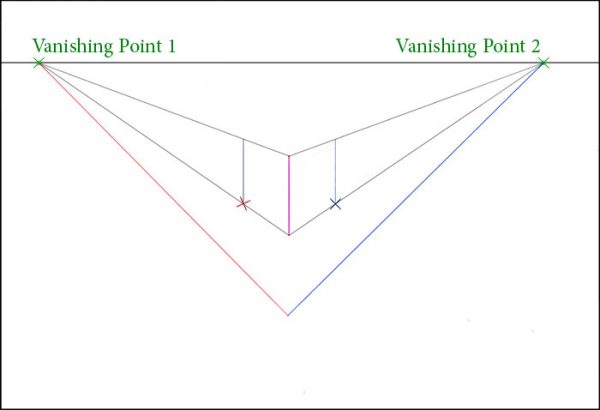 The rest of the steps is easy, and is identical to drawing a cube in two point perspective. All we have to do is to extend two lines from each vanishing points. These two lines go to the opposite corner of the cube, like this:- 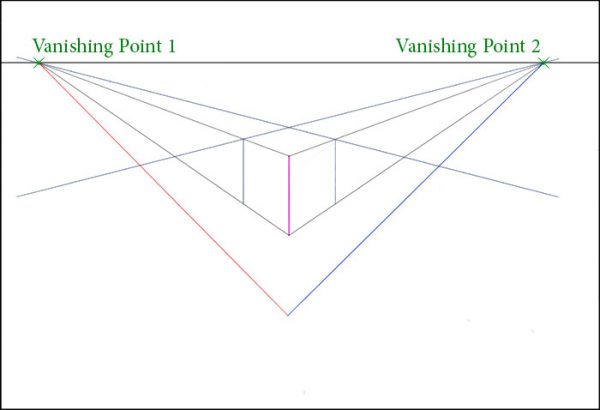 These two lines make the upper part of the cube:- 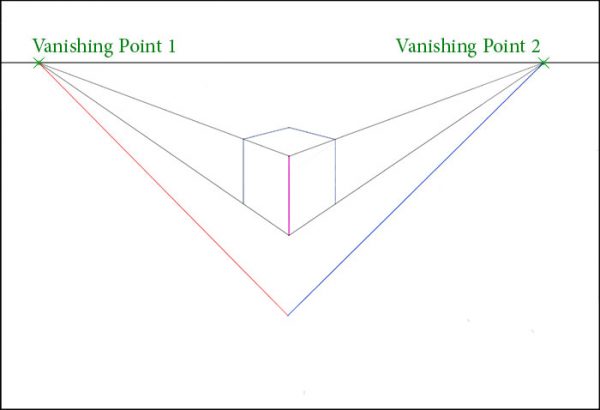 We are pretty much done here, we have a cube that’s drawn in perspective now.

Drawing a perfect cube in perspective certainly takes many more steps compared to drawing just any cube. These steps are only there to determine the placement of two edges of it.

Lucky for us, we won’t have to do that unless we actually needed such a cube in our artworks, which is not always the case. There’s always the option to eye the placement of the cube edges to be close enough too.

I hope this lesson has helped you draw a perfect cube in perspective. If you liked this lesson, please subscribe to my mailing list for more updates & promotions:-