How Perspective, Proportions, And Other Concepts Can Help You With Drawing The Human In Perspective

Drawing the human figure in perspective is a huge topic, too huge that it’s not possible to cover everything about it in one post. For the most part, I will focus on how perspective can help you with drawing the human body in various angles & views, while leaving some of the other aspects to the time to when I cover them in this blog.

While learning perspective alone can help you tell you where to place the various parts of the body in relative to the space. You still need to know how various body parts look from various angles, which you can learn by studying the anatomy of them (or at least observe their various shapes, which is a simple but effective process).

While this lesson can be read as a stand-alone, it still refers to many of the proportions and perspective concepts I explained in previous lessons. For that reason, I highly advice you to read my series about both perspective and proportions. As they can make it much easier to follow this lesson. You can refer to these two series here:-

The way that proportions and perspective can work together to help you draw better figures is one of the nice things about drawing, where learning additional concepts makes things that were previously complicated much simpler over time. As a rule of thumb, the more concepts you know, the easier for it to draw the objects that requires understanding of these different concepts.

Drawing The Human Body Inside A Box

You can technically draw the whole human body inside a box, as the perspective of both match quite well. If we took a look at the following pose, which is taken from the side. You can notice how the front side of the figure is foreshortened, thanks to the angle we are viewing it from:- 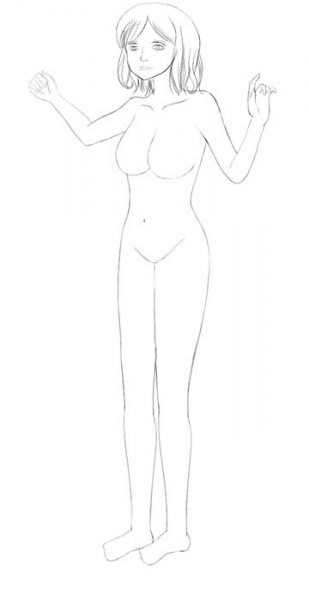 Also, because of the angle we are looking at the figure from, a good portion of the figure side is shown, compared to the side.

This figure can easily be drawn with the help of the box that encloses it. You could easily draw the box first, then use the heads count method to draw the whole figure:- 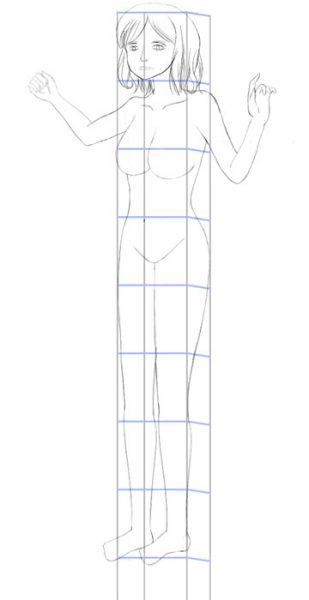 Notice there are parts of the figure that are not exactly part of the box, like the breasts, which can be can be large and not abide by the box. Or the arms, which go their own ways (notice how foreshortened both arms are).

Drawing Poses With The Help Of Perspective Concepts

Learning how to draw the human body in perspective can help you draw more poses. Many poses are actually very easy, except that only one part of the body tend to be distorted by perspective.

Take the pose below for example, the figure is drawn using the same proportions we saw in The Female Human Body Proportions lesson, except that one of the legs is foreshortened. By making the leg about half its original length, you can make the pose quite believable & realistic. 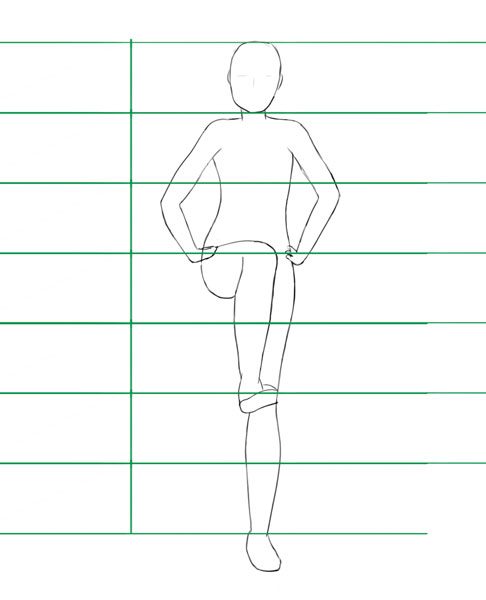 When we learned about the The Female Body Proportions, we studied the following body, which is divided using the heads count method:-

The answer is:- The relationship between the objects stay the same, but the distance between the ticks change because of Diminution, and can be drawn the same way.

Since we can draw the grid that encloses the body in perspective, we can also projects the various body parts in there:- 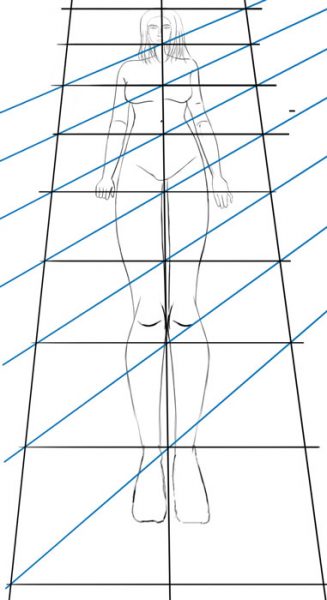 While the drawing appears quite flat. We could easily use it as a helper to draw a three-dimensional figure:- 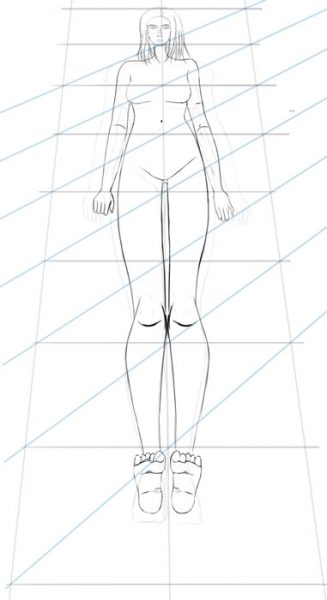 Don’t Depend On Ticks To Draw Such Poses

While the various grids I showed you can make drawing many poses much easier. It can be quite bad to be fully dependent on them every time you wanted to draw a tricky pose. Not only you won’t develop a sense for perspective, but you will be quite slow & boring to draw each pose.

This is an easy trap to fall into, as drawing in perspective can be quite neat, systematic and mathematical. So telling you to leave all that and learn measuring on your own may not sound easy.

How To Draw The Human Figure From Above

The human body can get quite distorted when drawn from above. To the degree that some of the body parts are not even shown.

While the concepts explained in this lesson can help you with drawing more human poses, you still need to put the time in practicing as many poses as you can. The concepts here will make it much easier to understand how these poses work. Just like many things in drawing, the concepts can be confusing, but taking the plunge and working with them can make all the difference.

Next Lesson:- How to easily draw a perfect cube in Two-Points-Perspective step by step