While many of this models are old. It is good to know that they are still available at some seller or in Amazon or eBay. This especially goes for the Intuos3 tablets. Which are the best Intuos for many artists.

For copyrights reasons, I couldn’t post a picture for the Intuos1 in here. Sorry for the inconvenience.

This is where out journey begun, the original Wacom Intuos tablet. Or Intuos1 like some people likes to call it. The Intuos1 came in white plastic, which I guess looked very good for its time.

Unlike the modern Wacom Intuos these days. The original Intuos didn’t have any express key at all. Instead, it had hot-cell keys on the top of the active area. Wacom calls these keys the Menu Strip.

The Intuos came in either a USB version or a serial port version. And it worked with Windows 95 or later.

Just like the case with many serial devices. The Serial Intuos1 had to be plugged into your computer while it is turned off. Unlike USB devices. Which you could plug into the computer at anytime you want.

Intuos1 supported 1024 Level of pressure sensitivity, which is more than enough for many graphics applications, even by today’s standards.

This early model had no tilt sensitivity, which makes it equivalent to the lower-end models you can find in the market today.

Unlike many graphics tablets nowadays. The Intuos1 had a nice feature, that feature allows you to adjust the tablet inclination. Similar to how you could with most keyboards nowadays. I think this is a very neat feature, especially for those who sit their tablets on their office while they are working, like how I do sometimes.

Even though the original Intuos lacked many things compared to the newer models. It still provided a lot of capabilities to create great artworks. So I wouldn’t be surprised to see some people that are still using it. 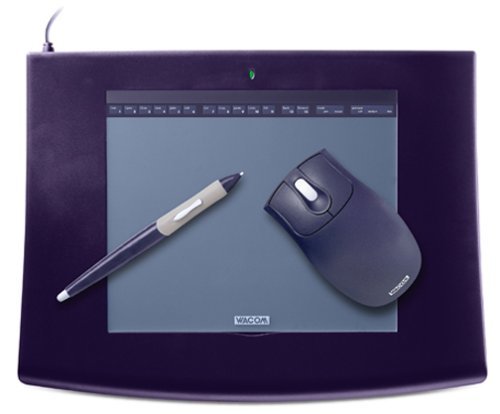 The Intuos2 was a great improvement over the Intuos1. Many of these improvements are in the pen itself, which now has a rubber grip. This has became the standard in all Wacom pens nowadays.

Unlike the Intuos1 pen, the intuos2 pen supports tilt sensitivity. Which is between -60 degree and +60 degree. And this is the tilt sensitivity that is used in all the upcoming models of the Intuos tablets, with very few exceptions.

Besides the pen, Intuos2 had an enhanced look, and a more comfortable rest area compared to Intuos1, which was all in plastic.

Besides these two features, there were not that much differences between the Intuos1 & Intuos2. The Intuos2 still offered the same pressure sensitivity as the Intuos1 (1024). And the same resolution (2450 LPI). And it also supported either USB port or a serial port.

And just like the original Intuos, the active area of Intuos2 had Menu strip buttons on it, whose number is different based on the size of the model you have.

Intuos1 stylus are not compatible with the Intuos2 stylus, this includes all the accessories like the airbrush pen.

Just like the Intuos1, the Intuos2 A4 & A5 models has the ability to adjust the incline of the tablet. Just like keyboards, this is the last Intuos tablet has that feature. 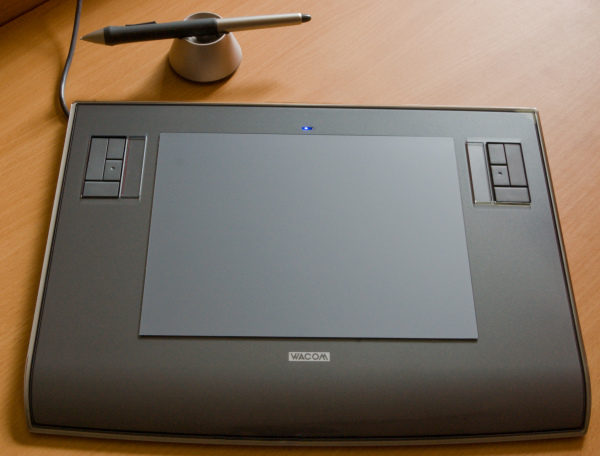 With the coming of the Intuos3, the improvements of the Intuos line have improved once again. The Intuos3 had the privilege to be the first Intuos tablet to come with physical keys, which are called Express keys. These buttons work just like the Menu Strip buttons (which were eliminated with this one), except that they are more convenience to use, as you can press them directly with your fingers.

Besides the express key, the Intuos3 introduced the touch strip, which is an area on the tablet you would scroll with your fingers to do things for you. The touch strips are used to zoom in or out. Changing the brush sizes, and so on. The smaller Intuos3 tablets had only 1 touch strip. And the larger models had 2 of them.

Besides the new buttons, the Intuos3 had double the resolution of the previous two Intuos tablets. Or 5080 LPI. Which makes it much more accurate than the previous model.

The things that didn’t change with the Intuos3 are the pressure sensitivity, which is still 1024. And just like the Intuos2. The pen had a rubber grip.

Many artists today still prefer the Intuos3 to the newer Wacom tablets. And some of them still use it till today.

Unlike the previous Intuos models, the Intuos3 can’t be inclined adjusted. 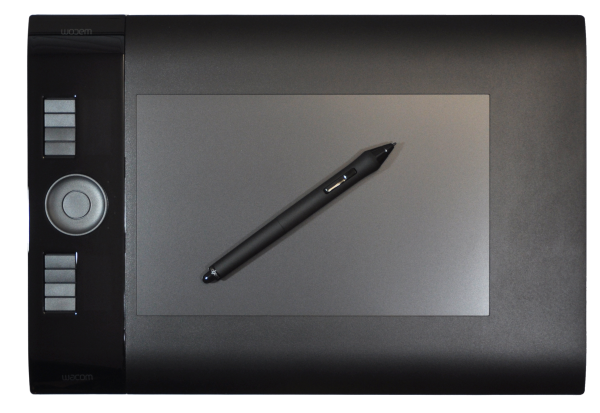 As some of you know, the Intuos4 was the first Wacom graphics tablet I owned. And it is still working for me until today. The one I had was the Small Intuos4, which I had to replace since I wanted a larger tablet. I use the Large Intuos Pro nowadays for my artworks. But I still use my Intuos4 while I am traveling, thanks to its small size.

The Intuos4 introduced the rotation wheel, which replaced the Touch Strips of the Intuos3. Some of the Intuos3 owners who got the Intuos4 took some time before they could get used to the new wheel.

Both the Rotation Wheel & the Touch Strip do the same thing: They allow you to zoom-in and out, change the brush size, and many other things.

The lack in another touch ring, even in the larger Intuos4, is one of the minus points in this tablet. But the Rotation Wheel of the Intuos4 had a button at the center of it. The button can be used to switch between 4 modes. All these 4 modes are totally customizable~

The Intuos4 had double the pressure sensitivity of the Intuos3, or 2048 levels to be precise. Not all artists needed the new sensitivity, but getting more of that didn’t hurt at all.

The Intuos4 has the same resolution of 5080 LPI, and the same pen pressure sensitivity, but note that the Small Intuos4 had a tilt sensitivity of +-50. According to Wacom’s website.

The Intuos4 is the first generation of Wacom Intuos that uses sizes names instead of paper sizes or inches seizes. There are 4 sizes for the Intuos4:-

The extra large one looked very different from the other smaller sizes. As it had a white surface instead of black (See the picture).

The Intuos4 was the first Wacom Intuos tablet that offers a wireless feature. There was a wireless version of the medium Intuos4, which had extra LEDs at the right of it. Unfortunately, there was no way to convert your existing wired Intuos4 into a wireless one. 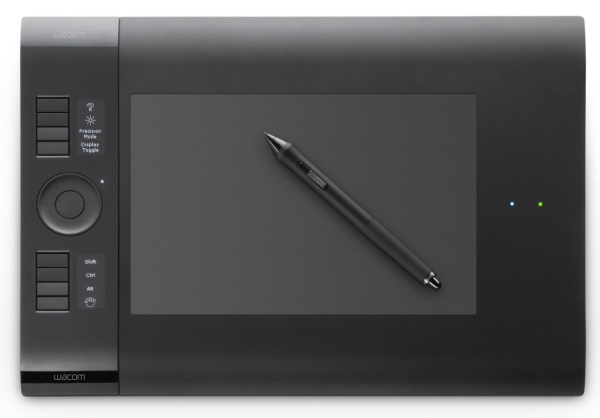 Compared to the newer wireless accessory kit. The wireless feature of the Intuos4 was not that reliable. Many people reported a lag after using it for a while. 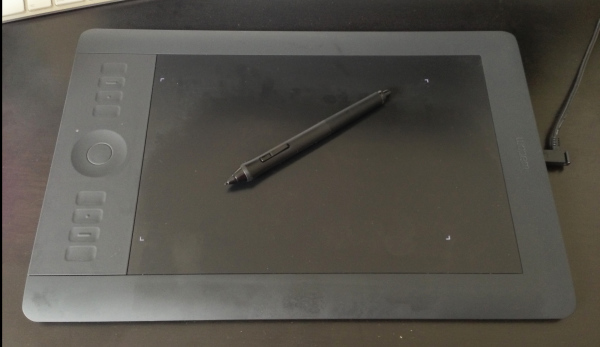 Wacom continued to make changed to the Intuos line with the Intuos5. For some people, the changes it added was complementary, but for others, it was a great that it justified the upgrade.

There are two key things the Intuos5 introduced. The first was that you could add a wireless accessory kit to it and make it wireless. There was one good & bad thing about this. The good thing is, the wireless reliability has improved much compared to the Intuos4. The bad thing is, you needed to get the Wireless kit separately. And those who paid to upgrade to the Intuos5 won’t get that feature right away. 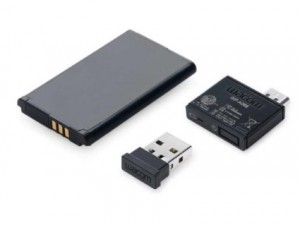 The second thing that came with the Intuos5 is the touch capability. The Intuos5, to some extent, works as a large trackpad. Which you could use to replace your existing mouse or trackpad.

The Intuos5 touch features included the multitouch capability, like pinch-to-zoom, panning and the like. To be honest, the quality of the touch capability of the Intuos5 was not up to par with dedicated trackpad. But it can help you work faster when you edit your images.

Since the Intuos5 had touch capabilities, it came without a cordless mouse. Putting an end to the Wacom mice era :)

Unlike the Intuos4, Intuos5 came only in three sizes. There was no extra large for it. I don’t know why, but that size probably didn’t sell much with the Intuos4.

Now here is what made things worse for many people, the Intuos5 has added a more paper-like texture to its surface. This made many people complain about it, as it makes the nib wears faster for them. Some people even thought that Wacom did that in purpose to make the more money out of their customers. I personally think the texture makes drawing with the tablets easier, but it would be nice to find an easy way to make the nibs last for customers (besides getting a surface cover). And maybe that’s what will happen in the future. 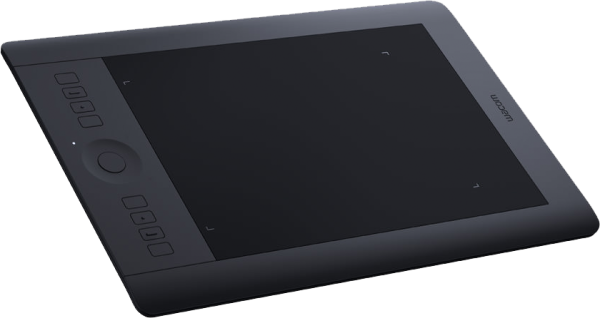 This is the tablet I currently use. The Intuos Pro is more of an upgrade to the Intuos5 than a new model on its own.

The first difference the Intuos Pro introduced is that the Wireless Kit is now bundled with the tablet itself. So you won’t have to buy it alone.

The buttons of the Intuos Pro are easier to use than the Intuos5. The look of the buttons is one of the first things you will see if you placed the two tablets side by side (Something the guy in the article above actually did).

There is a Special edition of the Intuos Pro, this edition is the same as the large Intuos Pro. Except that it has a sleeker looks. That doesn’t justify the extra expenses in my opinion. But I can’t deny it looked very nice. :) 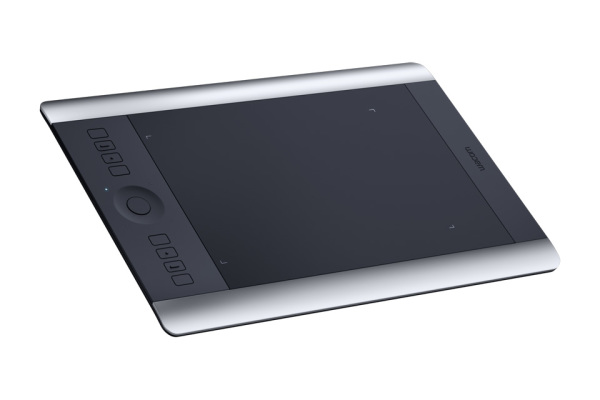 The other technical aspects of the Intuos Pro are the same as the Intuos5. The pressure sensitivity is still at 2048. The resolution is 5080 LPI. The same goes for the pen tilt sensitivity~

If you are interested about the Intuos Pro. Feel free to read my detailed review about it :D

The following video states the new features of the Intuos Pro:-

Comparison table between the main features of all the tablets