I received GAOMON S620 from GAOMON to review it and give my opinion on. From what I saw, it is a good option if you want a small affordable graphics tablet. The design is so compact it can be inserted into a bag sleeve, and it doesn’t take much space on desk. Making it very easy to have a keyboard on its side for inputting keyboard shortcuts (If the 4 hot keys weren’t enough for you).

When it comes to drawing, the drawing surface has some friction to it. That can help you draw lines more accurately. As for initial activation force (IAF), you need to press a bit on the tablet surface for strokes to appear.

I like having 4 hot keys on GAOMON S620. It’s something I think positively on any tablet I review. The placement of the buttons at the top of the tablet wasn’t to my liking personally, as it makes them a bit harder to use, but overall, I think having these keys is much better than not having them at all.

Having a battery-free pen can be quite convenient, since you wouldn’t need to recharge it at all. I say that because when I worked with tablets that requires you to recharge the pen, and there are times the pen stopped working, and I thought it broke until I remembered to recharge it. This can be easily forgotten as these pens need to be recharged once every few weeks.

If you have one, GAOMON S620 can be used with Android phone or tablet. Depending on the charging port, you will need to either buy a USB-C to USB-A  or a Micro USB to USB-A adapter.

Overall, I can totally recommend GAOMON S620 if you want a small tablet for drawing, one that’s easy to carry around, or if you just want an affordable one. It can be quite decent for photo-editing too. I don’t play OSU to be quite honest, but I think it can be good with that too.

You can by GAOMON S620 and check its price from the following links:-
#CommissionsEarned 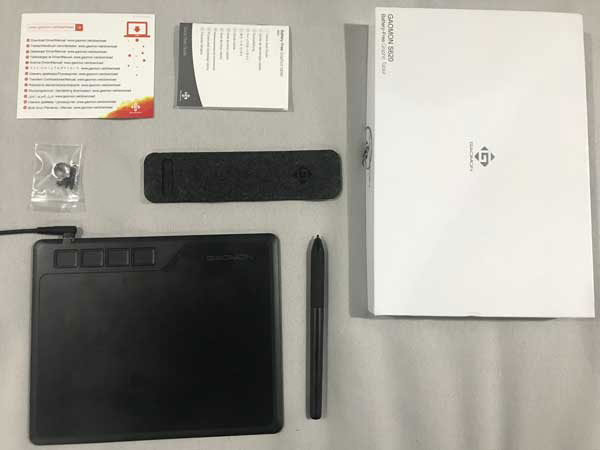 Once I received GAOMON S620, which comes in a small white box, I unboxed it & found that it came with the following stuff:-

To set it up, I downloaded the latest 620s driver from GAOMON’s website. I ran the setup program, then I connected GAOMON S620 to my test computer (a Lenovo laptop with Windows 10 Pro), and it worked right away. Just like the case with many graphics tablets, you may need to disable Windows Ink from the driver to get things to work:- 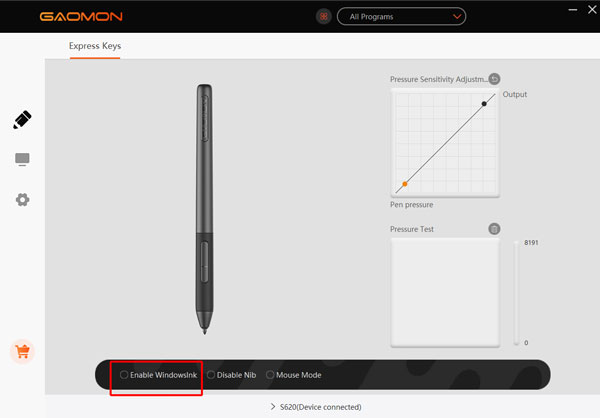 Now I finished setting up my GAOMON S620, it was time to start drawing with it & see how the drawing experience is.

GAOMON S620’s active drawing area is 165.1x 101.6 mm (or 6.5 X 4 inch), making it a small tablet. I personally tend to recommend medium-sized tablets for drawing, at least until you find out your ideal size, which may require you to try few sizes yourself (although I try to help you understand the differences so you won’t have to do that). In nutshell, smaller tablets are easier to carry around, are quite good for photo editing or like playing Osu, and of course, you can use them for drawing, especially if you have a smaller monitor, or if you don’t mind spending the time to get used to it. You can get the same accuracy of medium tablets by zooming in to the canvas. One of the advantages of a smaller tablet is that you don’t need to move your hand much during drawing, although the smaller drawing area makes it harder to draw using your arm, which can be useful for certain strokes. Small graphics tablets can be totally be good for a first tablet too, and whatever the case, they generally won’t stop you from creating good artworks.

In case you want to go for a medium-sized tablet, you can try out GAOMON ‘s other tablet, GAOMON M1220, which I reviewed recently in this blog.

GAOMON S620’s design is so compact that it doesn’t take much footprint on your desk. it supports 8192 levels of pressure sensitivity. This feature gives you the ability to create thicker and thinner line based on the amount of pressure you apply on the tablet surface. You can read more about pressure sensitivity in the dedicated article I wrote about it here. It doesn’t support tilt sensitivity at all, which is a similar feature that allows you the tablet to detect the tilt in your pen and vary the strokes accordingly. This is a less commonly used feature than pressure.

I spent some time drawing with GAOMON S620. The drawing surface make some friction with the pen. Which is good in that it helps you draw more accurately, although whether you prefer slippery surface or some friction depends on your preference. You need to press slightly on the tablet surface for the strokes to appear, something that’s common in a lot of tablets.

GAOMON S620 was quite responsive to my hand movement. Even around the corners. The active drawing area isn’t marked on the tablet itself, and it’s slightly smaller than the area inside the bezel, so you may accidentally leave the active area when you hover the cursor around the screen corner. That won’t likely happen while drawing, as you will draw on the middle of the active area almost all the time.

The only real problem I faced is a short freeze that happened whenever I opened any of the menus in Photoshop. This problem never happened in another program like Paint Tool Sai. I also think the IAF is considered a bit high compared to other tablets. If you’re the kind of artists that likes to draw with small strokes, then you may not like to draw with this tablet, otherwise, this shouldn’t affect your ability to draw with it.

There are 4 programmable hot keys at the top. These keys can be programmed to do keyboard shortcuts & mouse buttons (And more options, if you’re willing to explore them). I sometimes use these keys to move around the canvas, toggle between the eraser & brush tool & zoom in & out of the canvas. I sincerely don’t like the placement of the keys at the top of the tablet. I think it’s much better to have them on the side. That makes it much easier to reach them. The keys are still usable though, specially the 3 keys on the left. In case having 4 keys isn’t enough, or in case you want to use more shortcuts, you can place the keyboard on the side for that. The small footprint of GAOMON S620 makes that quite possible.

GAOMON S620 supports both Windows & MacOS, and it can be also used on Android devices too, which became a trend lately, and I quite like that. It makes drawing more accessible, even for those without access to a PC or a Mac. If you have an android tablet that doesn’t come with a stylus, then you can turn it into a drawing machine. To connect GAOMON S620 to your Android phone, you could use a adapter to connect it to your device (The adapter is sold separately, but it is cheap to get)

GAOMON S620 comes with the Artpaint AP32 pen. Which is a battery-free pen that doesn’t require charging. It has two programmable buttons on the side of the pen. These two buttons can be programmed from the driver program, just like the hot keys.

As you can infer from the name, the pen use the A32 / A50 nibs, which are the same nibs type used on the GAOMON M1220 tablet (reviewed here). You get 8 spare nibs of that out of the box. GAOMON ‘s nibs tend to be more affordable than most of the other brands, as they come in packs of 20.

A Final Word On GAOMON S620

Overall, I think GAOMON S620 is a decent small graphics tablet. I quite like its compact design, and it does what it’s supposed to, which is allowing anyone to get into digital art at an affordable price.

I hope you found my GAOMON S620 review useful, and see you again in another review.

You can by GAOMON S620 and check its price from the following links:-
#CommissionsEarned