Generally speaking, I quite like what GAOMON PD1560 can provide at this price point. It has a good drawing area, with a good screen resolution of 1920 X 1080 (though some artists way prefer more). The pressure sensitivity is good as well (though you shouldn’t care much for that). Some artists may like drawing with the screen protector that comes with it, though I recommend getting a better protector. Artists that like to draw on the glass surface directly.

Having 10 hot keys on GAOMON PD1560 itself is a feature we don’t see on many Cintiq alternatives. So kudos for GAOMON PD1560 for having that. The driver may give you a bit less options than some of the other alternatives, but it’s good overall

. Not being able to download many older versions of the driver gives you one less option to deal with the possible driver issues you could encounter. Whatever the case, it’s highly recommended you remove any graphics tablet or Wacom driver you have installed on your computer before you even proceed with installing the drivers. 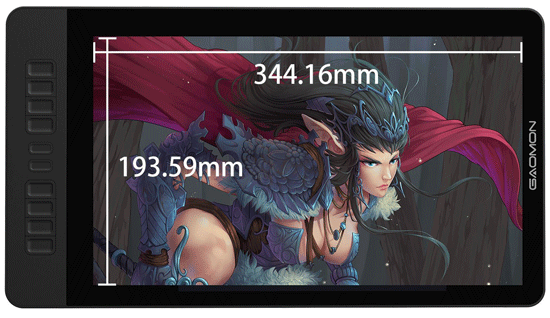 The monitor supports 1920 X 1080 resolution, or HD as it’s also called, this is a good resolution to draw with. While some artists may prefer higher resolutions, like 4K, you can totally be fine with it if you’re not picky. I totally expect Cintiq alternatives like GAOMON PD1560 to come with 4K in the near future, as that’s obviously the trend here. The screen itself has very nice colors, they will serve you well. Even if you’re the kind of artists that really care about getting very accurate colors, you may still like the colors of GAOMON PD1560.

HDMI is the only display port supported by GAOMON PD1560, making it compatible with almost any computer in the market. As the other display ports can be converted to it. The only issue is for people with a much older computer, like the ones that only have VGA port. If you have one of the newer Macs, or any computer that supports external display via USB-C, you will need to use a USB-C to HDMI adapter, but it will still work. The same goes for computers with other ports as well, like Displayport & mini Displayport. 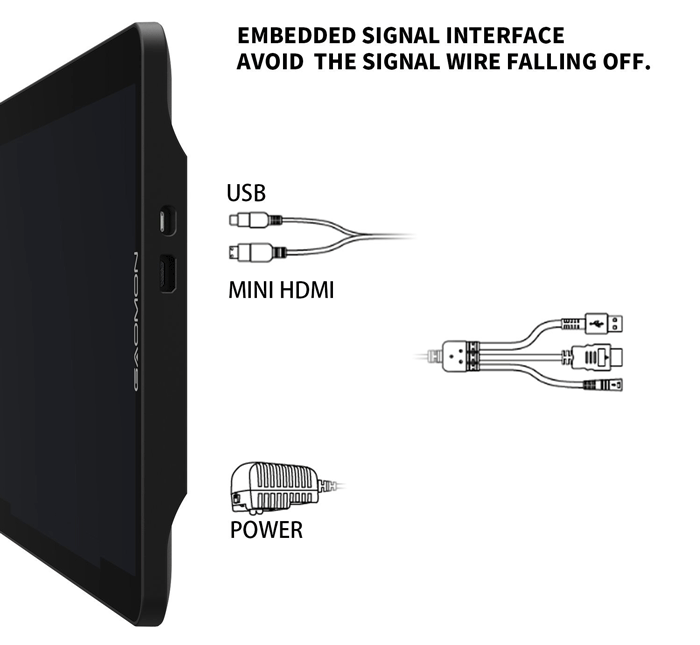 To avoid cable clutter, there’s a 3-in-2 cable to connect GAOMON PD1560 to your computer, for both the USB & the display port. It also includes a port to plug the power cable as well, eliminating any need for you to need any other cable. It’s convenient to use a cable like that. For that reason, I hope we see more pen displays that use cables like this one. Speaking of the power adapter, it’s made to be compatible all sorts of plugs, including UK, Europe, US & AU plugs. 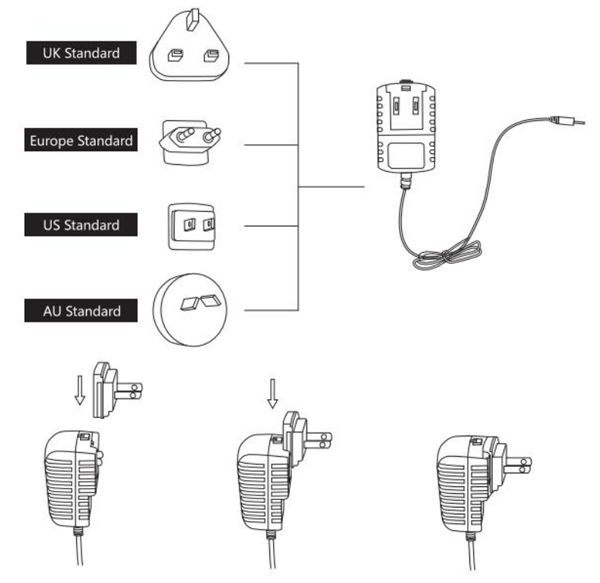 Right behind the hot keys at the side of GAOMON PD1560 (which I will talk about shortly), there are 5 OSD buttons, which you can use to adjust the screen itself, like the brightness, contrast, color & saturation, just like any computer screen.

The Stand & The Lack Of VESA Mount Support 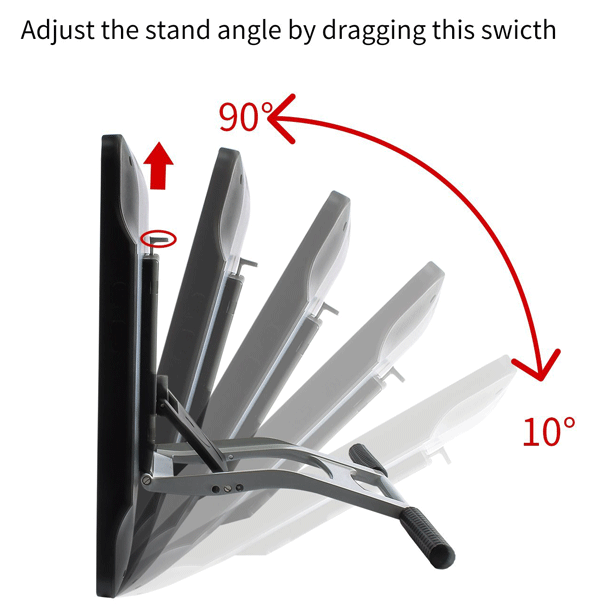 At the back of GAOMON PD1560, you can attach the stand that comes with it (you need to screw it yourself). The stand allows you to tilt GAOMON PD1560 from 20°to 80°. If you’re familiar with other pen displays & Cintiq alternatives, you will be familiar with the stand. As far as I know, GAOMON PD1560 doesn’t support VESA mount, artists may choose to place a relatively small display on their lap & draw that way. But I can imagine some would want to use it with an arm. You may be able to attach it to an arm using some braces or something, something I did with my HP Pavilion 23xi, which also doesn’t support VESA mount. Using braces like this is not ideal, but it’s still better than nothing.

GAOMON PD1560 supports 8192 levels of pressure sensitivity, this seems to becoming the new standard in all drawing tablets & pen displays. If you use a pen display that supports less levels of pressure, like 2048, I wouldn’t recommend you to upgrade to GAOMON PD1560 just for the sake of getting more pressure levels, as it’s not going to benefit you much, but it’s nice to have the additional pressure.

While drawing with GAOMON PD1560, there’s some parallax you will encounter. Parallax, if you’re not familiar with it, is an offset between the pen tip & the cursor on the screen where you draw. It’s more common to happen in the corner areas in certain digitizers. Parallax is common in many pen displays, including Wacom Cintiq. You will get used to it after you use GAOMON PD1560 for some time, but it can be quite annoying at first. Even the specifications of GAOMON PD1560 states that the offset is ±0.5mm at the center, and ±3mm around the corner.

Many Hot Keys To Use To Your Heart Contents 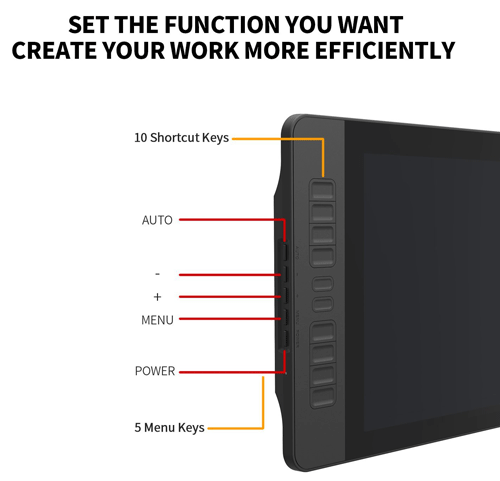 On the side of GAOMON PD1560, there are 10 hot keys, 8 small ones, as well as 2 smaller ones. You could customize these button to do many keys combinations from the driver options, as well as mouse clicks, switch the display, or even execute a certain program.

It would have been nice if there’s a touch ring or something alongside the hot keys, as that can make certain tasks like zooming in & out or resizing the brush. I won’t complain about the lack of that here, as the lower products tend to not have things like that.

Some artists don’t need hot keys at all, as they prefer to use the keyboard, they also need more combinations that any pen display hot keys can offer. Hot keys can make it convenient to draw without the need for any other device, especially if you don’t need many shortcuts (I personally don’t use much shortcuts when I draw, but I need many when I paint, for that reason, I tend to mostly use the hot keys while I draw). Hot keys is something Huion Kamvas GT-191, which I wrote a review for here, didn’t have.

All the Hot keys only one side, that makes it possible to use GAOMON PD1560 for both right-handed, as well as left handed. To do that, you will need to rotate the drawing area from the driver settings (you can find that in the “Work Area” tab).

The Pen & The Pen Holder 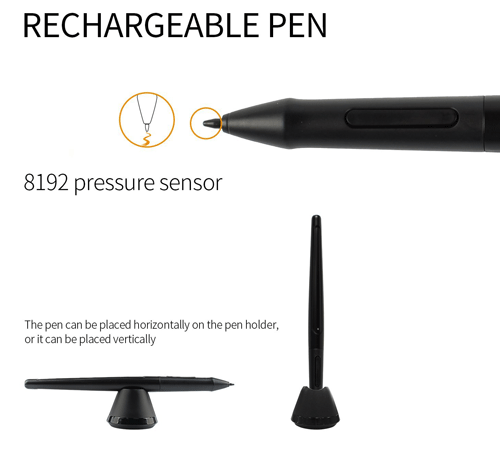 The pen that comes with GAOMON PD1560 has two buttons on its side, these buttons can also be customized to do different functions, just like the hot keys. For example, I think the two buttons are good to do undo & redo. The pen has no eraser at the back of it, as you need to plug the charging cable there (yes, the pen has a battery you need to charge). The pen battery last for a good amount of time, so you won’t have to worry about charging it very often. 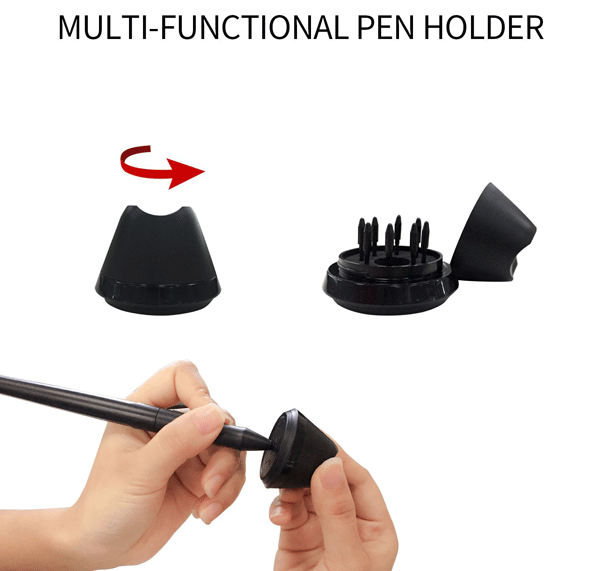 Alongside the pen, you will get a pen stand. Inside that holder, there are spare nibs. And beside allowing you to hold the pen, the stand also doubles as a nibs removal tool, as there’s a hole at the button where you insert the nib before removing it.

Once you’re out of nibs, you can always buy more. If you’re curious about that. I have wrote a post discussing how much Wacom nibs last, the post is about Wacom tablets, but many of the information mentioned in there apply to other brands as well. In short, the amount of time the nibs last depends on the pen display surface & the amount of pressure you apply while you draw with the pen. For that reason, if you opted to draw on the glassy surface of GAOMON PD1560, you may not have to worry about buying them a lot.

The driver is very similar to Huion Kamvas GT-191 (reviewed here), that’s not surprising, as many of Cintiq alternatives use parts of Huion itself. You could configure all the hot keys within the driver, this includes the pen keys. You can also rotate the working area, which is how GAOMON PD1560 is suitable for both right-handed & left-handed people.

From what I saw by the time I am writing this review. Gaomon provides the latest driver version on their website, but none of the older versions. The reason this is important is because sometimes using an older driver version can solve some of the problems the new drivers may have. I did that a lot with Wacom products (Wacom offers most of their older drivers in one of their sites). While Wacom may be notorious for their drivers problems (which could be the reason you’re reading this review), drivers for Cinitq alternatives like GAOMON PD1560 are not without issues, so having access to the older drivers would have been a great help. 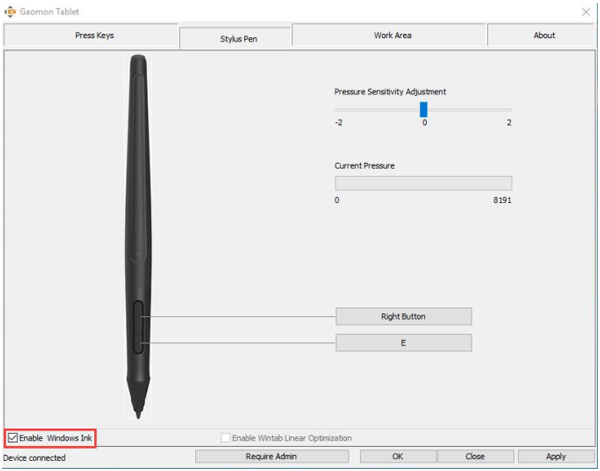 If this is your first non-Wacom pen display, it’s better you know a simple but important tip that can help you avoid some bad issues. If you have a Wacom driver installed on your computer, or any graphics tablet or pen display driver for that matter, it’s highly recommended you uninstall all these before you install GAOMON PD1560’s driver. Not doing that can cause the drivers to conflict, which could cause all sort of problems.

How To Connect PD1560 & Have It Work As A Second Display In Extend Mode?

You may want to know the best way to connect GAOMON PD1560 and have it in extended mode. I don’t take credit for the method, but I rewrote it in an easy-to-understand language. I thought you may want to know about it in case you decided to buy GAOMON PD1560. The instructions are mostly for Windows, but you can follow most of them if you have a Mac & know about all the different display options on it.

Make sure to plug all wires in correct way. The 3-in-2 cable can help you there:-

Windows only:- Please press Windows+P, then from the 4 options you get down there, choose extend. Picking any of the “computer only” or “projector only” may cause GAOMON PD1560 to not have signal.

Once you get that to extend mode, make sure GAOMON PD1560’s resolution is set to 1920 X 1080. You do that from the screen resolution dialog. Here’s how to do it in different versions of Windows:-

In the driver “Work Area Setting”, make sure to pick “PD1560 Display” as work area. As you want to draw on your GAOMON PD1560. This will also avoid having an offset that makes it harder to draw. 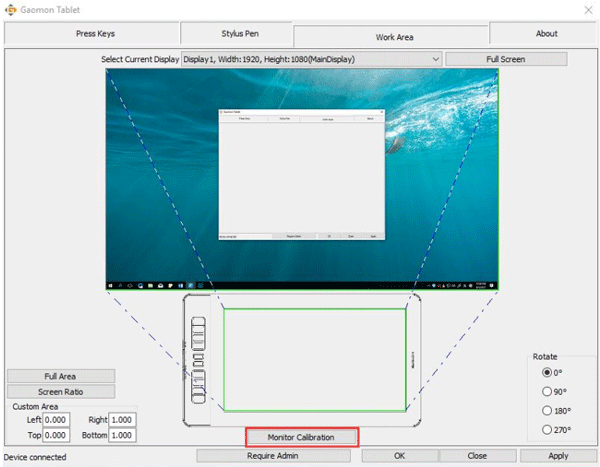 After that, GAOMON PD1560’s screen will display your desktop background. Now all you have to do is to drag your drawing program there, and have fun drawing.

Note:- Besides the resolution. It’s pretty recommended that you set the scaling to 100% if you’re on Windows 10.

GAOMON PD1560 is very similar to Kamvas GT-191 (reviewed here). And so a lot of the points I mentioned in this review, like the screen protector, the screen, pressure sensitivity, the pen & more are similar to it. GAOMON PD1560 has two advantages this pen display has over the Huion, the hot keys & the smaller size (for those who want that). If you opted to get any of the two, you won’t go wrong (The Kamvas GT-191 allows you to adjust the pressure curve though, and has a larger display, it also supports more display ports too), as long as you’re are fine with any of the issues you may encounter with any of them, like the parallax & the possible driver issues.

I hope you liked my GAOMON PD1560 review, and see you again in another review. ^^