Drawing the hands can be very tricky, and it’s probably the body part artists struggle with the most. I struggled with it for years (I still do, but I am getting better). For that reason, I feel a strong desire to help others draw it well, even by little. Which is why I made this drawing hand tutorial.

Drawing A Hand Step By Step

First, draw the pinky finger, you can start by drawing any finger you want. It’s advisable to start by drawing the arm first, to give you something to base your hands on. Specially that in many cases the arm is much easier to imagine & predict compared to the hands, and that you draw them before the hand when you draw the full human figure. But I sometimes pick a point at the middle of the drawing as a sort of challenge, it partly forces me to see lines as they are, which makes it easier to draw it accurately later, rather than just drawing it the way stored in my head. For more about this, read my Drawing on the Right Side of the Brain review.

Note:- It’s totally okay to go to the last step and draw the arms if you found the way I am doing it hard, but believe me, the more you challenge yourself when it comes to draw, the better you could become. :D 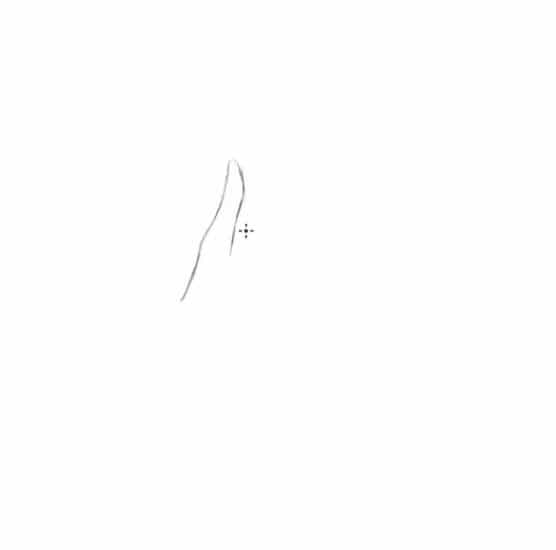 Draw the ring finger, since the fingers are a bit foreshortened, they are going to be shorter than the palm of the hand. 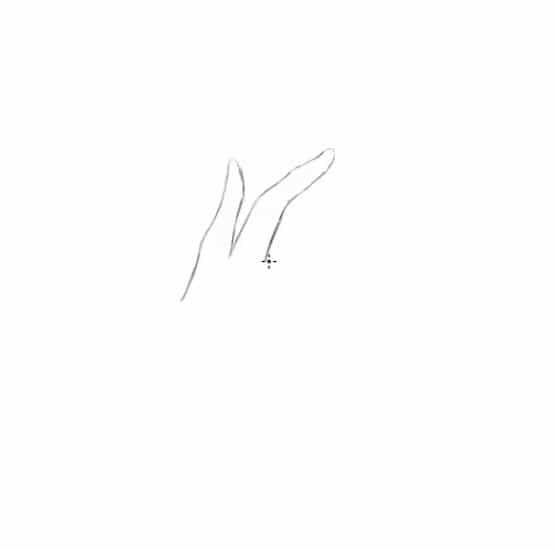 Notice the small changes in the curves as you draw the middle finger, small changes like that makes the fingers look more natural. You could add some meat to the fingers, or make them look scrawny, all by controlling them. Even if you are to go to stylized hand, learning to control your curves is still needed to create them, albeit your task would be easier that way. 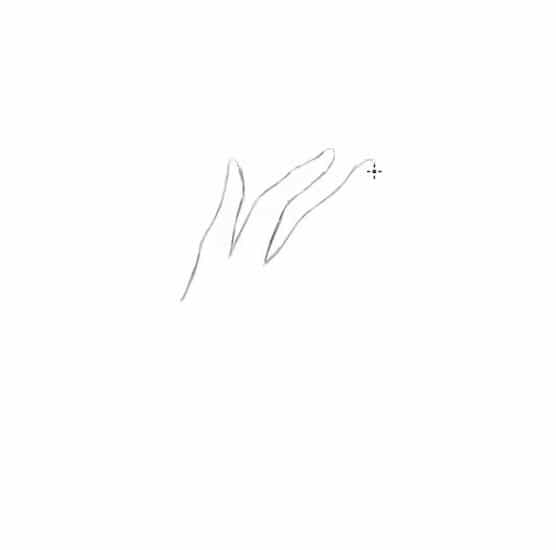 This is how the drawing looks like after I am done with the middle finger:- 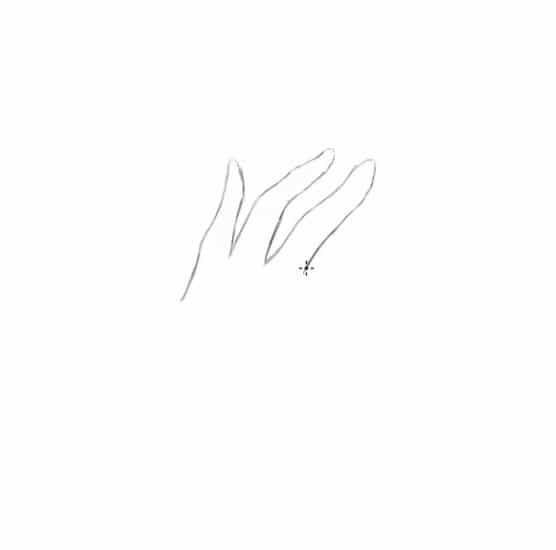 Draw the index finger, take not how it’s close in length to the ring finger. 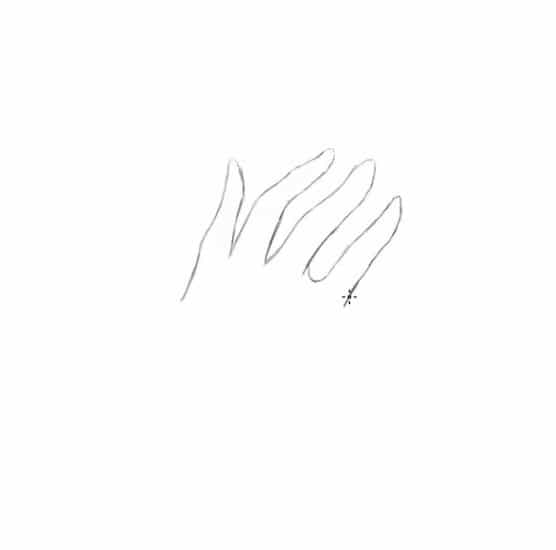 Go down a little bit, this is where we are going to draw the thumb. A quick look at your hand will show you how the thumb is placed a bit below the other fingers 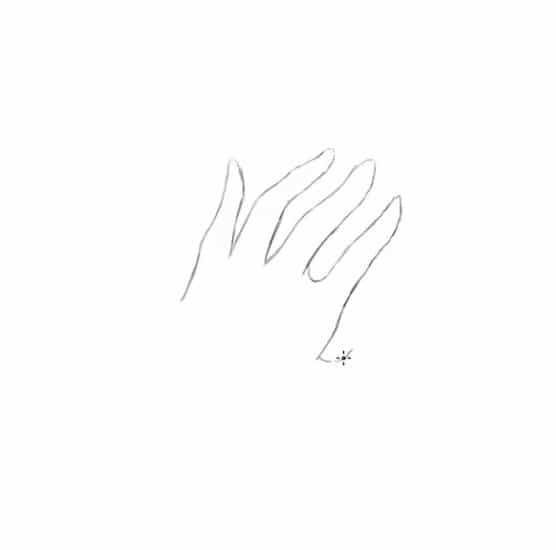 Draw the thumb finger a bit thicker than the other fingers. 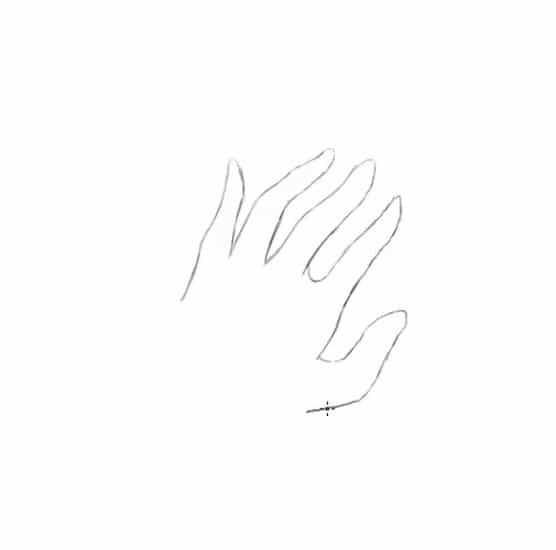 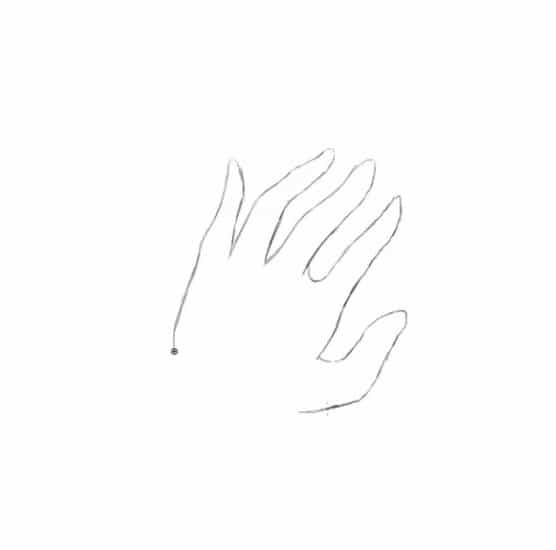 Add the fingernails to the fingers, it’s easier to see where each finger points after this step. 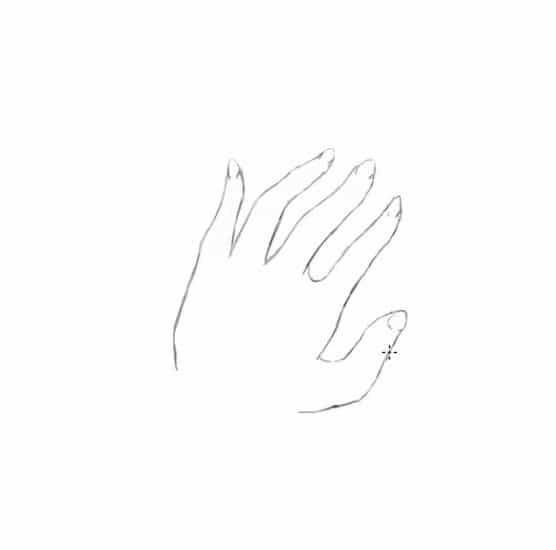 And finally, draw the arm. I made a mistake here you can’t see in the picture, but you can see in the video below. Drawing the arm last probably made the task harder, so it’s totally okay to do this step first if you found it harder to do it the way I said here. And to do it this way at a later time. 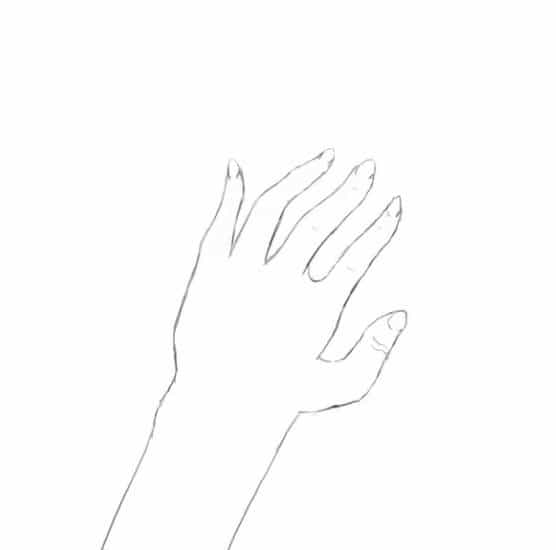 I have a video showing you how I drew the hand about right here, it took me about 3 minutes to do the drawing. But I sped the video up a bit to make it easier to watch.

In this video, I used Photoshop & a Wacom graphics tablet to do the drawing, but you can use any tool you feel like.

There are a lot of small details to keep in mind while drawing the hands, some of them are too small you won’t see them in most tutorials. That’s why I strongly advise you to observe the hands to understand them. If you find observing object like that boring, then you could do so by drawing them in as much details as possible. Also, it’s totally advisable that you draw a lot of hands, and to study the hand itself in order