Bosto Kingtee 22U is a generally good pen display, which provides you a Cintiq-like experience for drawing directly on the screen. It may not be the best pen display I reviewed yet, giving how it doesn’t support Mac officially, but you could use it on a Mac & Linux using the 3rd party firmware.

If we chose to ignore these two problems above, you get a good package out of Bosto Kingtee 22U, like a relatively big screen with HD resolution, and good pressure sensitivity.

Please bear in mind that this review is based on research, and that I don’t own Bosto Kingtee 22U myself. I hope you find my findings in this review useful.

Pros Of Bosto Kingtee 22U

Cons Of Bosto Kingtee 22U 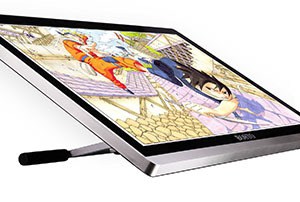 This is my first time reviewing a pen display tablet from Bosto, another company that produces Cintiq alternatives. From the first look, Bosto Kingtee 22U looks similar to the other pen displays I reviewed before, with a flat display with no hotkeys on it, and a stand that can be tilted backward & forward. These pen displays gives you a good tool to draw directly on the screen, they may not have the bell & whistles of the more expensive Cinitq. 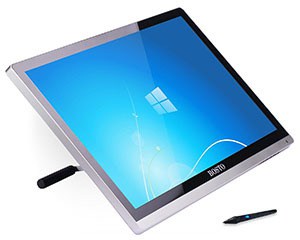 Bosto Kingtee 22U provides a 21.5 inches display with a full HD 1920 X 1080 resolution, which is enough to drawing for most people. The pressure sensitivity is 2048, which is the typical you see in most drawing graphics tablets nowadays.

Bosto Kingtee 22U has no hotkeys on it, so you will need to keep your keyboard besides you while you are drawing.

By the time of writing this article, Bosto Kingtee 22U works with Windows only, as there is no Mac drivers in the website, so it is not an option in case you are a Mac user. Some of the other Bosto pen displays have a Mac driver, so I wonder why this one doesn’t have one. According to the admin in the support forum, there is third-party firmware update for it, which you could access in this link.

The display buttons are at the button of the display, which mean you will need to lift up the display to use them, either to calibrate the colors or to power it on/off. 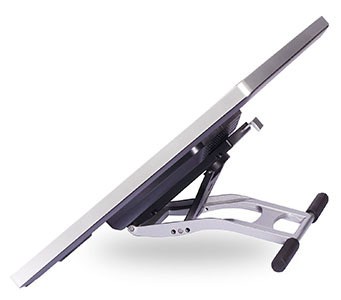 You can connects Bosto Kingtee 22U to your computer via one of the VGA, DVI & HDMI available in it, which makes it compatible with all sorts of monitor. It doesn’t support Mac’s mini Displayport out of the box, but since there is no Mac driver for it yet, this is not an issue. Thanks to the placement of the display ports, you can’t lay Bosto Kingtee 22U on a perfectly flat position.

Now let’s talk about drawing with Bosto Kingtee 22U, to create strokes with the pen, you will need to press in the range of 0.5 gram to 1 gram for the stroke to appear, something that’s known as initial activation force (IAF), which needs to be low enough to draw comfortably. The IAF in this tablet is probably as good as it gets for any brand of pen display tablet. You can also test Bosto Kingtee 22U with the ruler test to see if the final lines will have jitters, and you won’t find that. 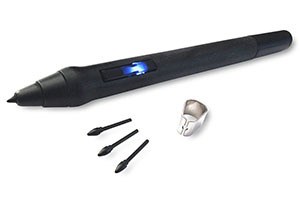 The pen that comes with Bosto Kingtee 22U is charged via the USB cable, since you need to plug the charging cable in the back of the pen, it has no eraser at the back of it.

Bosto Kingtee 22U works with many art applications, like Photoshop, Illustrator, Sketchbook Pro, Manga Studio & Corel Painter. There is a good chance it will work with more art applications too.

The manual that comes with Bosto Kingtee 22U is in both English & Chinese. I don’t speak Chinese, but the English in is bad, something I have seen before in multiple Chinese products before, it is okay to read, but it would have been better to hire someone to write a better manual.

In case some parts of Bosto Kingtee 22U drawing is smooth while others are not, it is advisable you clean the dust off your tablet, just like it is explained in this thread

I hope you liked my Bosto Kingtee 22U review, and see you again in another review. ^^