If it was up to me to define perspective, my definition is going to be:-

Creating 3D worlds inside 2D paper by varying the sizes and shadings of the objects, and distorting the lines to give you that feeling

Without perspective, your drawings will look distorted and unrealistic. Drawing in perspective is basically the art of creating the illusion of 3d in 2d paper. In essence, it is the physics of drawing. :)

You may be able to learn to draw characters without to know much about perspective, but later you will need to learn that in order to create the scenes where your characters live. So, learning to perspective is one of the things you must do learn if you want to are drawing

There are two types of perspective, line and aerial:-

As I just said, Aerial Perspective can be seen even if all the objects are of the same size

Now we have defined perspective and the two types of it. We will take a closer look at some of the most common concepts related to drawing in perspective. Don’t be intimidated if you did not get them at first, they are things you most likely know about, even without having to study perspective

As we all know. Parallel lines never meet, but in reality, if we looked at two parallel lines going into distance, they will appear as if they meet at some point in the distance, even though they don’t not meeting at all really. This point where the two lines meet is called the vanishing point. If you took a look at the following picture, you will notice that all the parallel points of the roof, the wall and the floor all meet up at one point, this is because all of the lines are parallel to each other Different sets of parallel lines has their own vanishing points. 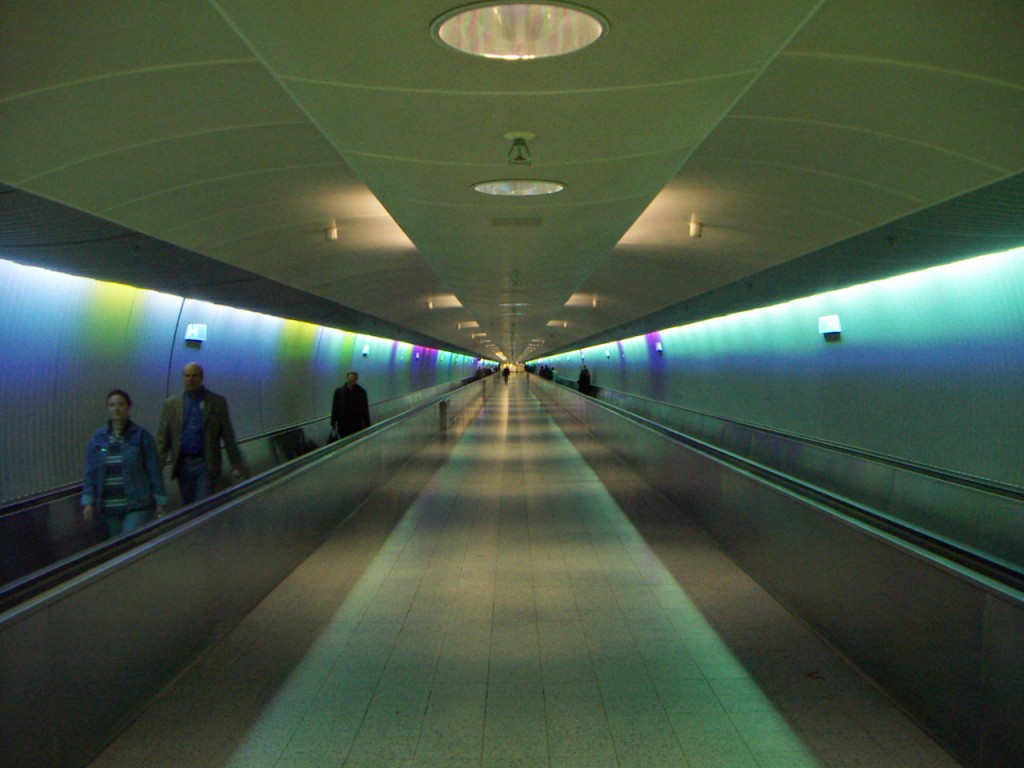 When all the points in the drawing meet at one point, we see what is called the one-point perspective, which we are going to explain next.

One point perspective is the easiest and the most basic kind of perspective to understand, there’s a chance that you already understood what it is from the last section, but if you did not, don’t worry, I will explain it in more details now

If we imagined the room or even the whole world as a cube, and we are directly facing one of the sides of that cube. We will be able to see a clear example of a one point perspective, where all the parallel lines will meet at one point. In one point perspective, all the main lines in the pictures seems to be attracted to one single point in the distance (As opposed to two, three or more, as in the other types of linear perspective). 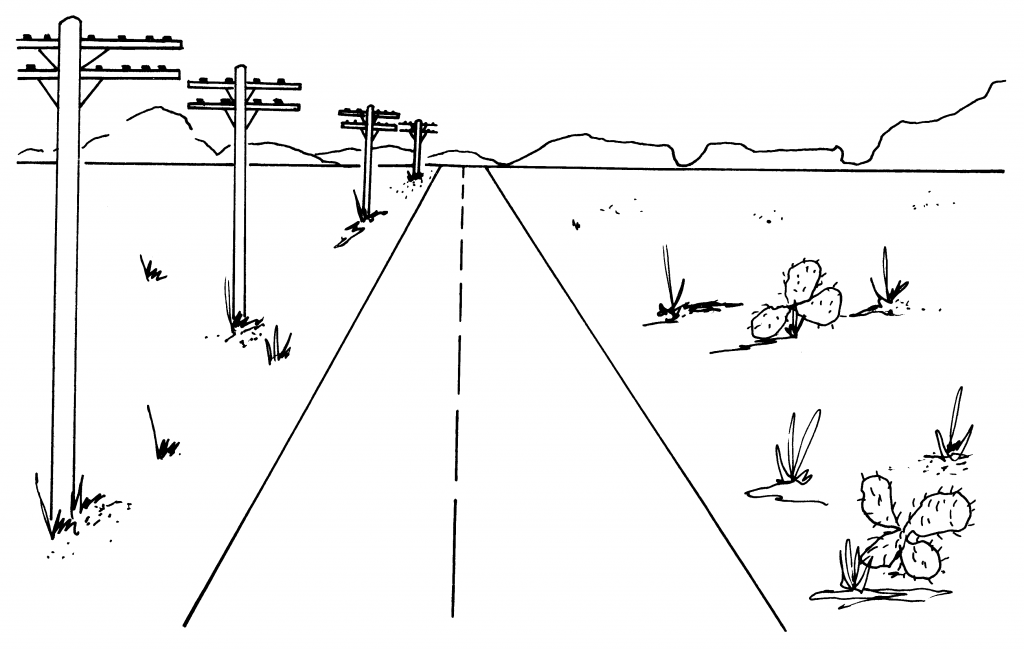 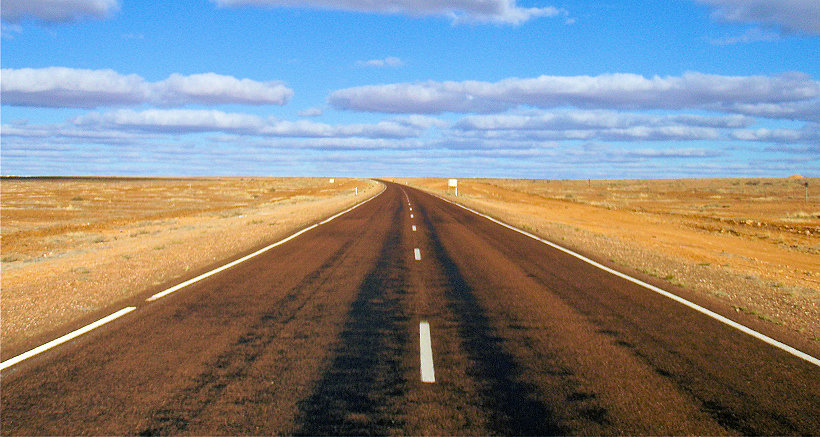 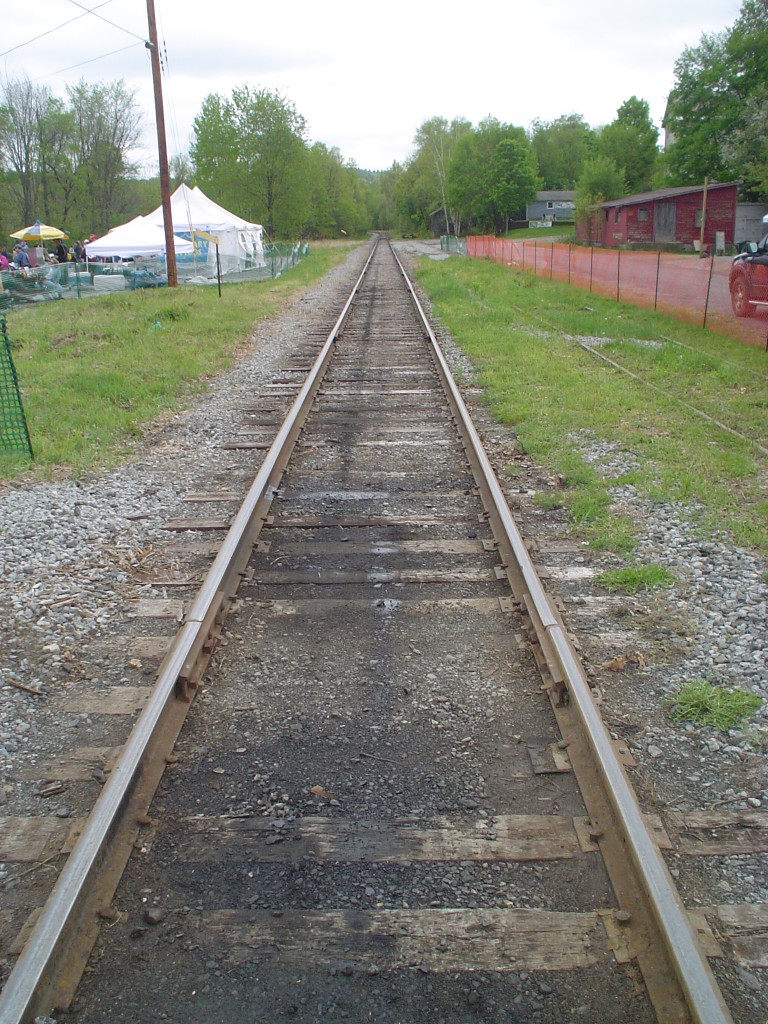 See! The sitting of this kind of sitting is so identical, and in each of these cases, it is like you are inside a cube while you are exactly facing one side of it,. And this is so easy to see in the case of the room example. in case of the road and the rail, the cube is huge and invisible.

How to draw one-point perspective

Drawing this kind of perspective is easy, it is actually the easiest, and the good news is that there is a very standard way to do it. 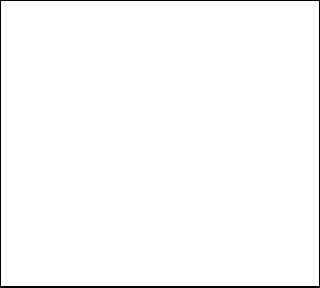 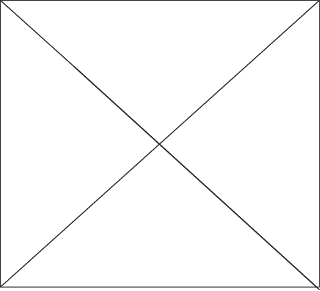 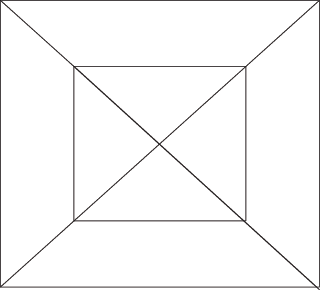 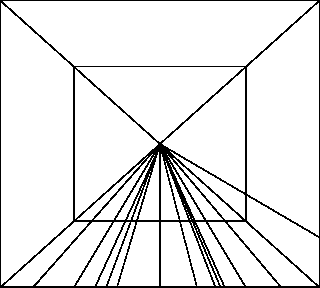 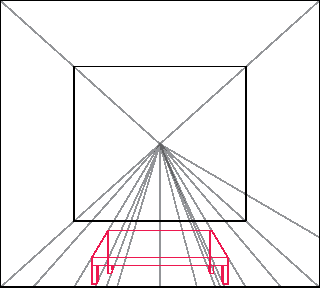 When to use one-point perspective

The simple answer is:- When all the points in your picture meet at one point at the end, like the examples we explained above. One-point perspective is so simple and doesn’t have much uses asides from these. Anything that relates to a tunnel, corridor, rails or road that goes away from us is usually drawn in that perspective. Or when you are mostly facing only one side if the 3 imaginary walls that surrounds you (which you can see if you are inside a room).

Going on with two points perspective

In two points perspective, it is like you are facing the corner of the imaginary cube instead of one of the sides of it(whether you are inside of it or not).

If you are starting to get confused by all the concepts introduced from here forward, don’t panic. The confusion will go away once after a while once you get used to all these concepts.

The building:- Any building, as long we are looking directly at one of its corners, without looking from below or from above, is a great example of two-points perspective:-

The inside of a room:- Just similar to the building example, except that we are looking from the inside of the cube, instead of the outside of it. Keep in mind that the parallel lines in the inside of the room converge to different direction than the previous example:-

How to draw two-points perspective

Just as you may have guessed. like we used one central point to draw the one-point perspective, in two-points perspective, we use two points to draw it. As I stated before, following these steps on paper or in using a drawing software is the best way to get used to them.

When to use two-points perspective?

Now it is time for the Three-Points Perspective!

Looking at a building down from above, it is easy to see the third set of parallel lines converge downward. This is the sets of lines that were always vertical in our two-points perspective examples:-

How to draw three-points perspective

Drawing three-points perspective may seem intimidating a little bit, but if you followed my tutorial on how to draw two-points perspective above, you will be fine, the steps are roughly the same. I will point out the difference while we do the steps below:- We start by drawing  a triangle, each corner of that triangle represents one of the three vanishing point. The upper edge of this triangle represents the horizon line. The scene we are drawing will be at the middle of this triangle, so make sure it is big enough to you will end up with a very small drawing:- 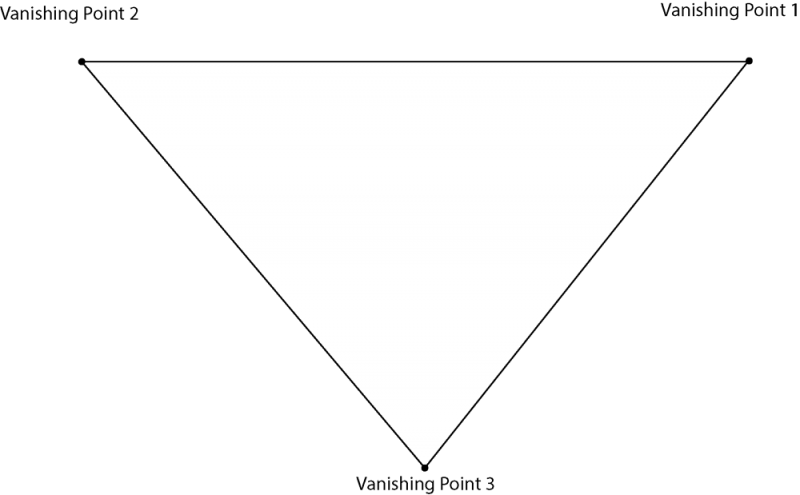 Next, we draw a straight line, just like we did in the two-points perspective tutorial above.:- 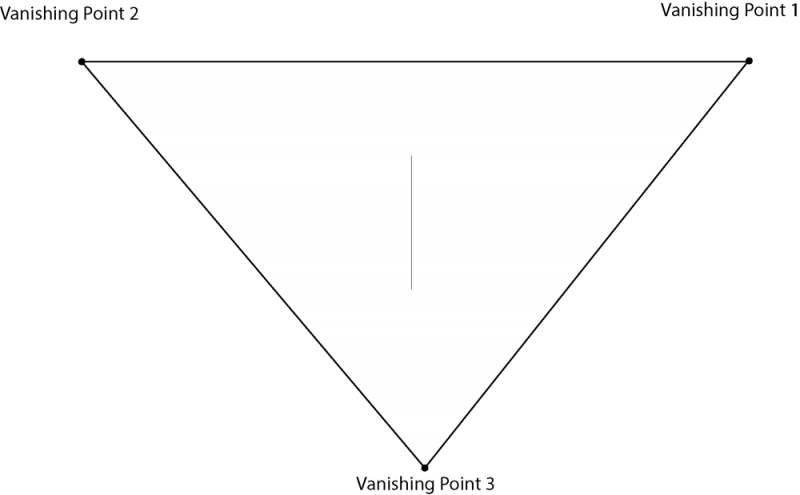 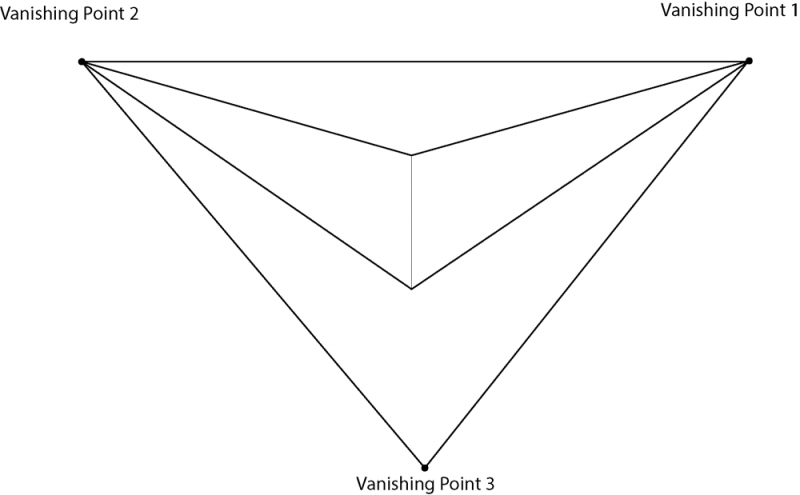 So far, everything we have done is the same as we did in the last tutorial, but now things are going to get different. We draw two straight lines between the two set of parallel lines, just like we did before. Instead, they must extend to meet with the vanishing point 3, as we see in the picture:- 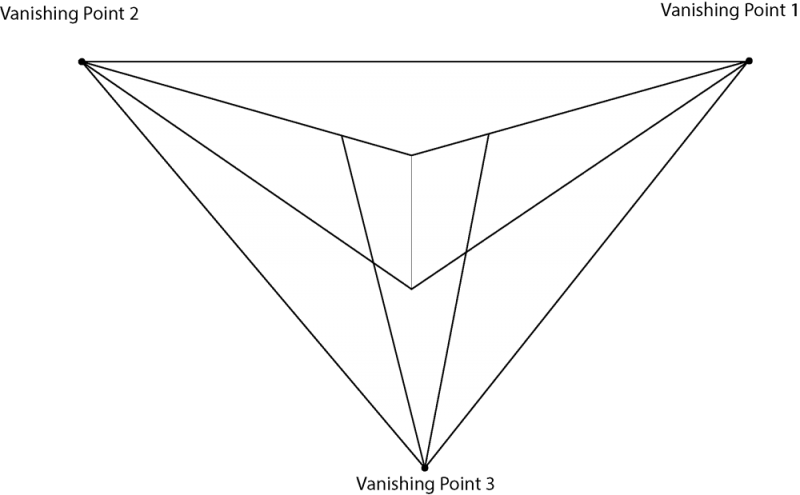 Draw 2 more straight lines from the tip of the two lines we drew earlier to the vanishing point in the opposite direction, just like you see in the picture. Now we have drawn the upper side of the boundary cube of the object we are drawing(which is a building, by the way):- 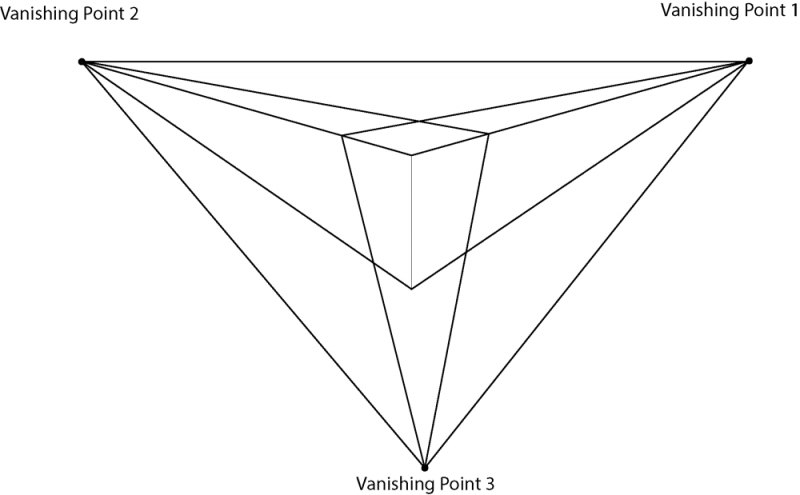 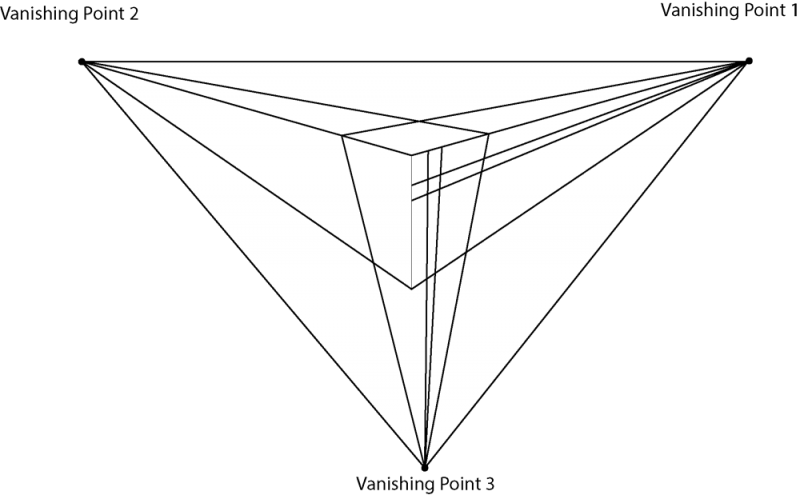 After erasing the guidelines created in the last step, the window is easier to see now:- 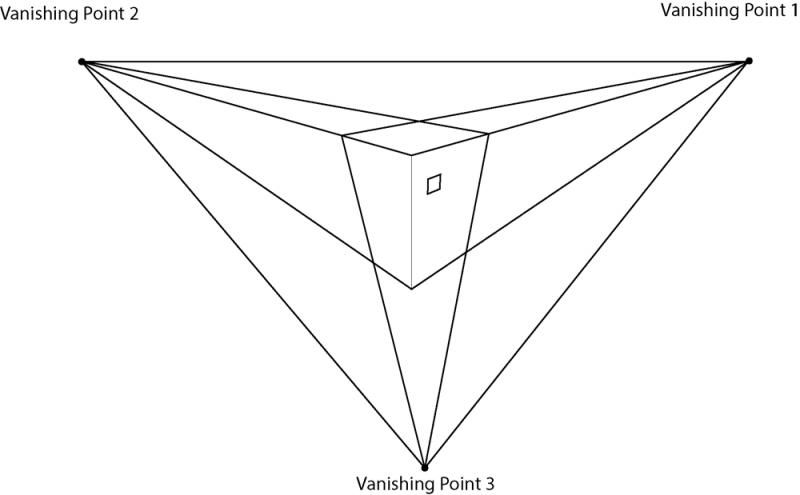 When to use three-points perspective?

And finally, time to take a look at the other type of perspective, Aerial Perspective

Aerial Perspective that gives you the illusion of space and distance through the manipulation of the details and the contrast of the objects in the scene, instead of manipulating lines as we did in linear perspective. Aerial Perspective is also known as Atmospheric Perspetive

Where to go from here on?

This article serves as a good introduction to perspective , but that’s not all, there are many things related to the topic that I barely touched, which I will try cover in part II as much of them as possible. In general. Drawing in perspective is a topic that spans many books, and I encourage you to read at least one dedicated book to learn as much about it as possible.