Now Is Time To Practice Some Proportions, In A Simple Yet Effective Way

As you know by now, proportions involves measuring distances in various ways, drawing or imagining ticks. This is all what we are going to do now. All the exercises here may be simple, but they involve the same stuff you will have to do working on your drawing. Practicing these stuff on their own, and getting them right, can help you immensely with proportions.

Just like new artists could start practicing their art by drawing squares, circles, lines & hatching to get your hands used to it. As these are the building blocks for everything else they learn later. The same can be said about the exercises here.

For that reason, I highly encourage you to draw along these tutorials. Print the pictures I worked on here, or create your own (since they are easy to create in any drawing program, like Photoshop).

While doing the exercises, you’re totally okay to use a ruler after you’re done to check how well you did, don’t worry if you never got the ticks by 100%, as that’s a very normal thing to happen.

I also included some cheating tips to help you do that using a computer. The point of these tips is not to get you to avoid these exercises, but to help you draw faster whenever you have to work faster.

Note:- This post is a part of a series on drawing proportions, you can refer to the first post of the series here if you missed it.

Exercise 1:- Finding The Middle Point Between Two Objects With Your Eyes

In this exercise, I will give you two lines, and you have to draw a line right at the middle point between them. All using your eyes.

Let’s do it the easy way. When the space between the two lines is not that big, it should be relatively easy to find the middle point. Like in the following two lines:- 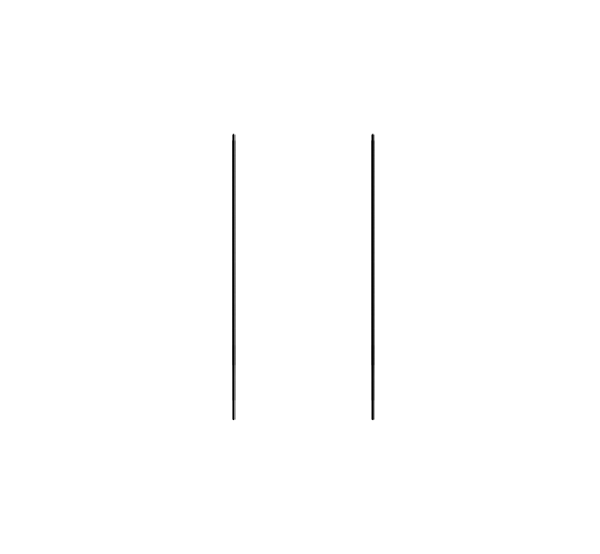 You can draw a line or a point on the estimated point. Here’s how I did:- 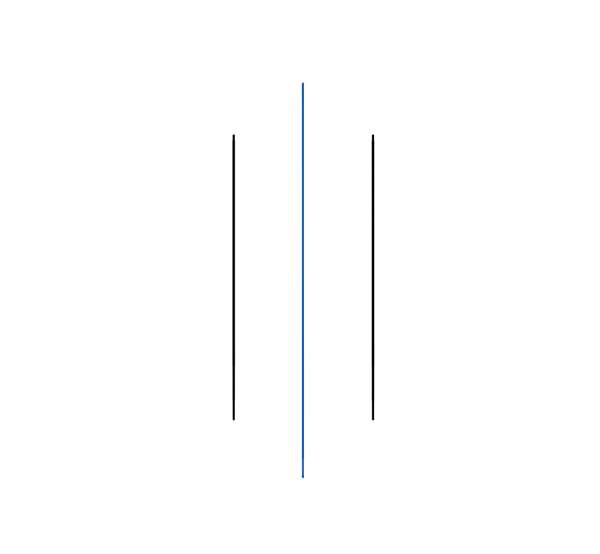 Now let’s do it again, but this time, I will be increasing the space between the two lines. 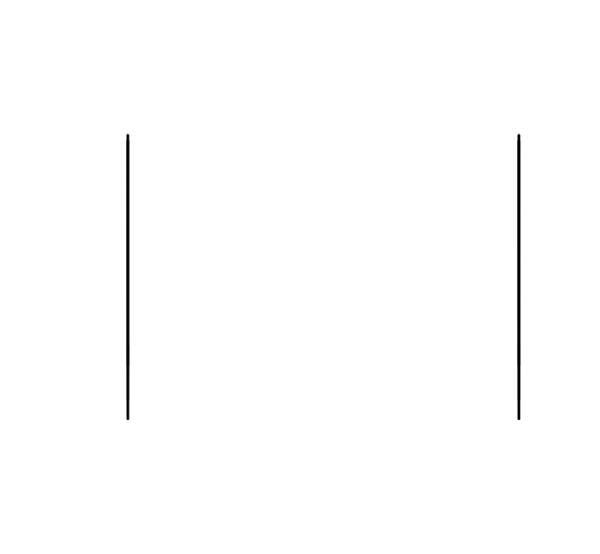 I tried to get the middle point here:- 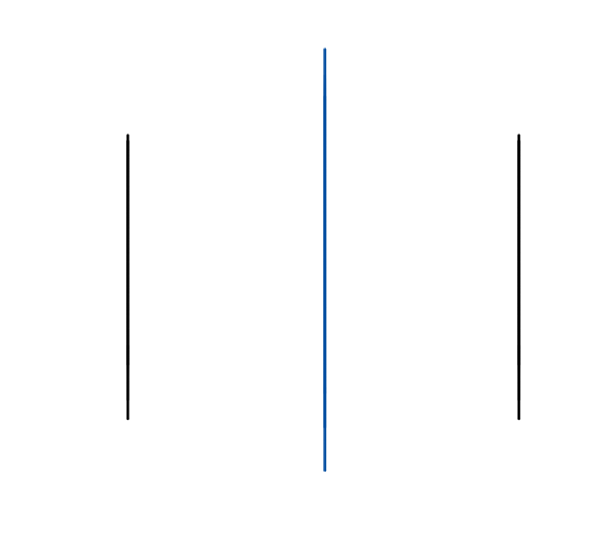 Let’s do it one last time, but this time, the space will be even larger:- 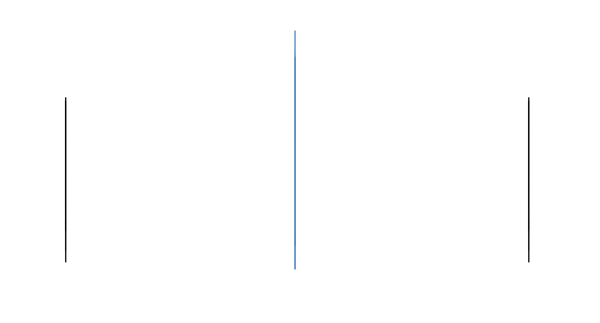 You can try to increase the space until you get to the point you can get the line right every time.

Cheat Tip:- If you draw digitally, you can zoom out with the zoom tool

Exercise 2:- Measuring Ticks With Your Eyes:-

You will often have to draw equal ticks in order to use them to construct your drawing. As well as to copy a drawing accurately if that’s what you are after. Having equal ticks is particularly useful for drawing the human body, where each tick is equal the height of the head.

First, you draw the first two ticks the way you want. Depending on how large you want your final drawing to be.

Now, draw a 3rd tick with the same distance as the first two ticks, as much accurately as you can.

The same way you did the two ticks, draw a 4th, a 5th & 6th one, and so on, until you get to the number of ticks you want (you can do that as you’re drawing, or draw them all at once before you start drawing).

Another way to draw ticks is to divide an area equally with ticks. Rather than having ticks extend to the rest of your canvas, you draw a certain number of ticks in-between two lines. This is the same as dividing an area equally, but using multiple lines.

We have our two lines right here:- 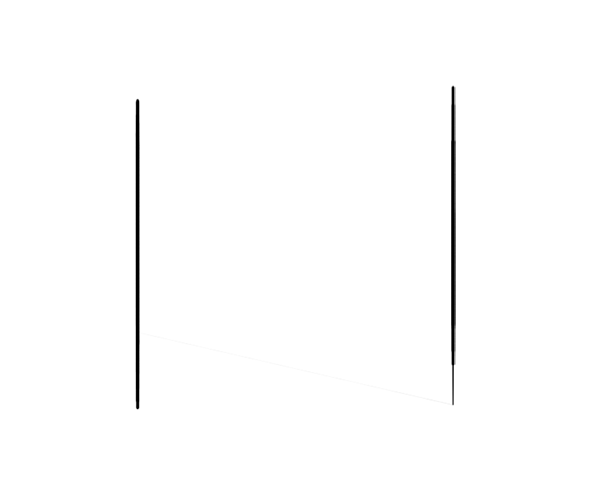 Let’s start by dividing the area between them into 3 equal sections, this is what I got here:- 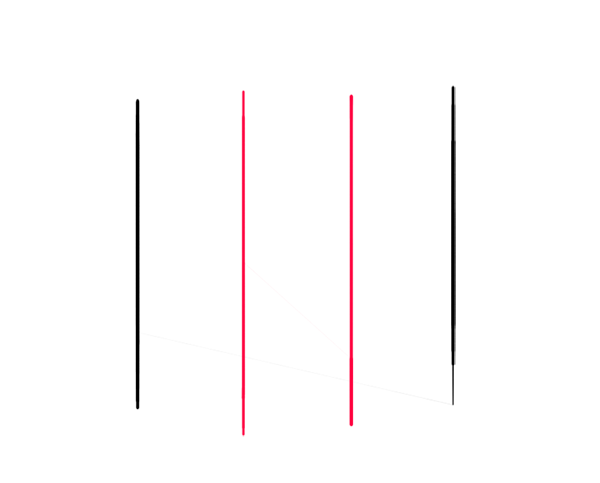 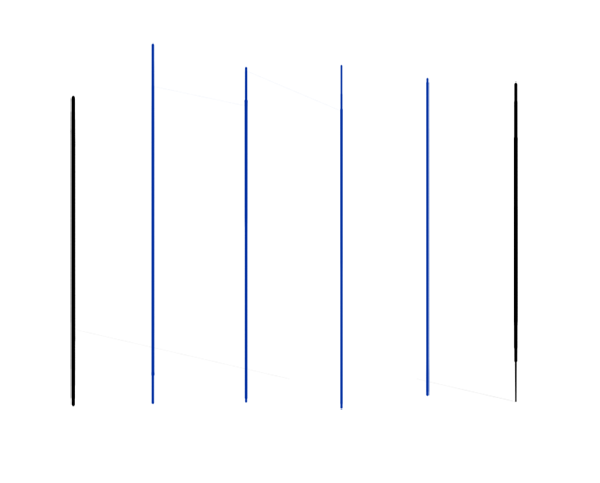 It may take you few tries to get, but it’s totally possible.

Let’s do it again, but with 10 sections this time around:- 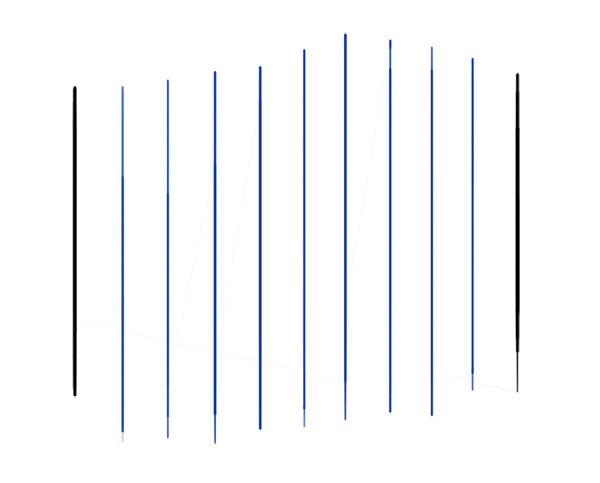 Tip:- The key for dividing into equal number of sections is to determine the size of only one of the tick, which is the tricky part. Sometimes you don’t really need all the ticks to be really drawn, which can make things easier for you.

You can repeat this exercise by varying the distance between the lines, to make things harder for you.

This kind of measuring has multiple benefits. Suppose you’re drawing the human face, and you want to place the eyes, you will have to divide the face into 5 ticks to avoid getting the eyes wrong. 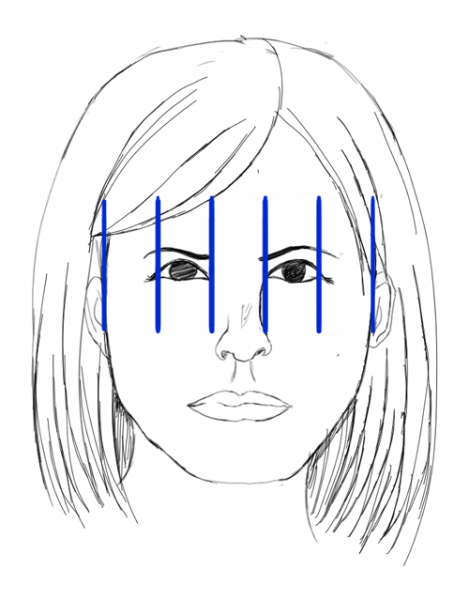 This kind of measuring is also useful for drawing clothes or parts of them, and many other things within a drawing that’s already there.

You probably noticed we mostly deal with either vertical or horizontal ticks at a time. When it comes to creating actually drawing in proportions, you’re going to need both horizontal & vertical ticks. So let me show you one way to go about it.

Suppose you already have the following vertical ticks you made for your drawing, and you needed a horizontal tick of an equal size. 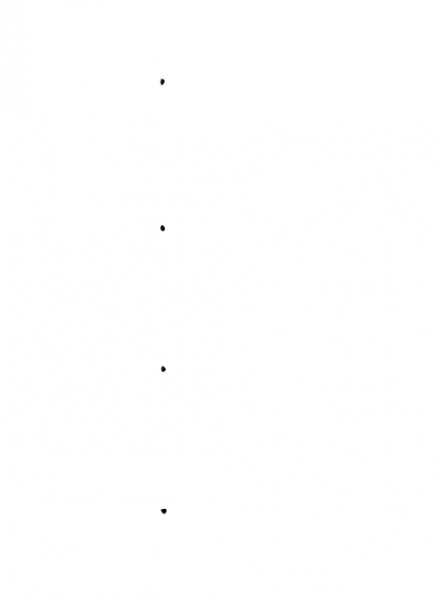 Imagine a square whose left (or right) edge is the line between two ticks, you. The square shouldn’t exist in your drawing, but it should look like this:- 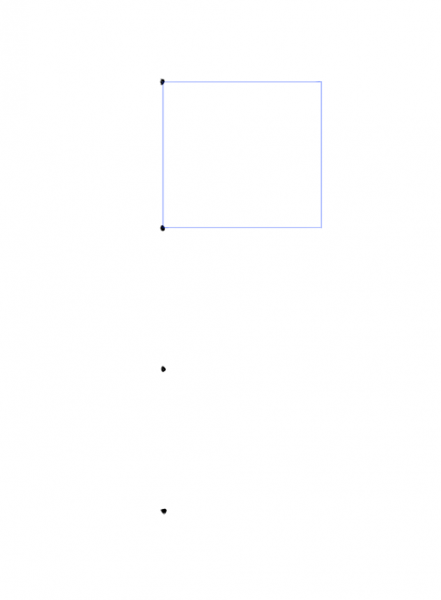 Simple add a tick on the corner of that square:- 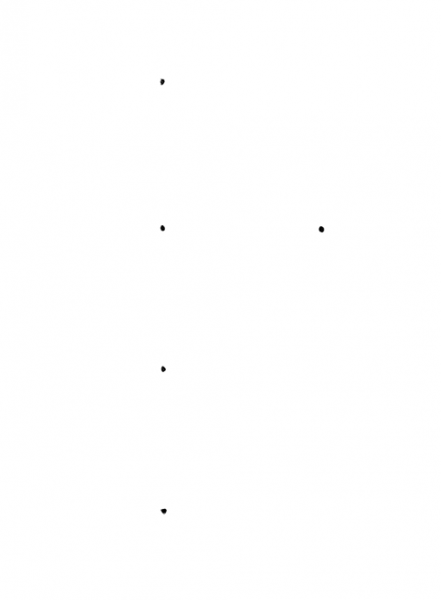 Tip:- If drawing squares is hard, then I suggest you practice drawing them on their own. Mastering these simple stuff like 2D shapes like squares & circles, or even the more complicated ones, like cubes, can help you big time as an artist. I am aware this sounds boring, but trust me, it’s worth it. ;)

This exercise involves drawing an identical but mirrored version of a shape or a line you already draw. The advantage of doing so it that you don’t have to measure proportions as you draw the second shape, as you’re technically copying the shape you already drew.

This technique is useful for many situations, like when you draw shoulders or vases. The goal of this method is to speed up your drawing by copying what you already did, and to learn to measure spaces as you draw your lines. Something I did while copying the banana in the first part of this series:-

For a starter, we have the following shape:- 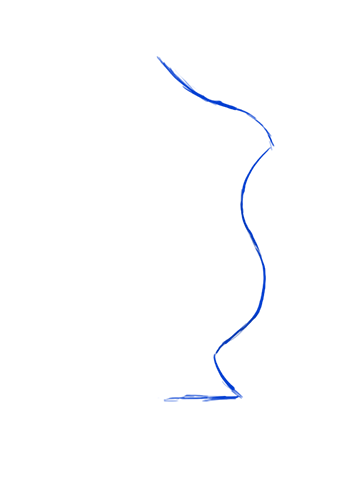 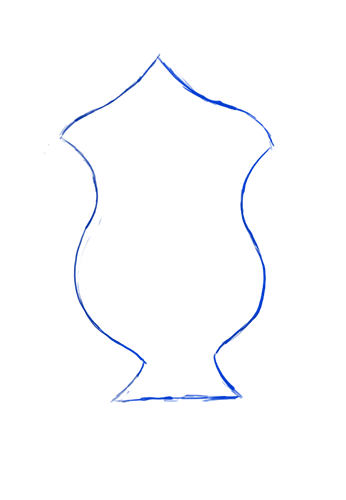 We can do the same exercise again, while keeping the copy further from. Say we have the following shape:- 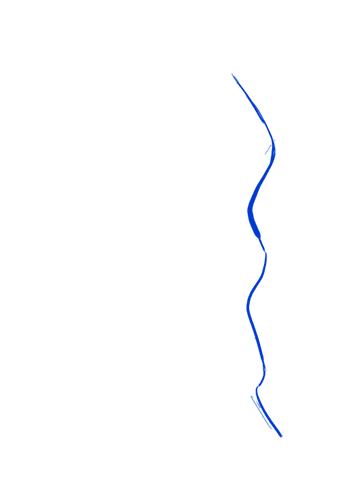 We can create a copy of it some distance away from it:- 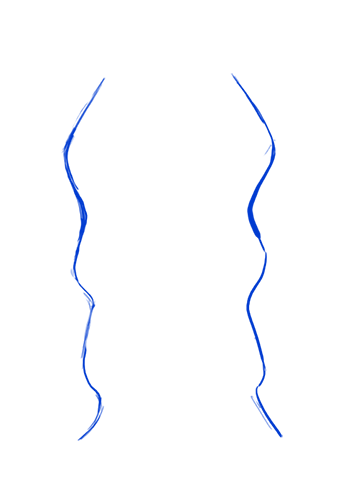 Cheat tip:- If you draw digitally, you can copy the shape then flip it, to save some time. To copy a shape, you can simple duplicate the layer the shape is in (assuming it’s on another layer) by selecting Layer>Duplicate Layer from the main menu:-

One you copied the shape, you can select Edit>Transform>Flip Horizontal from the main menu to flip it. 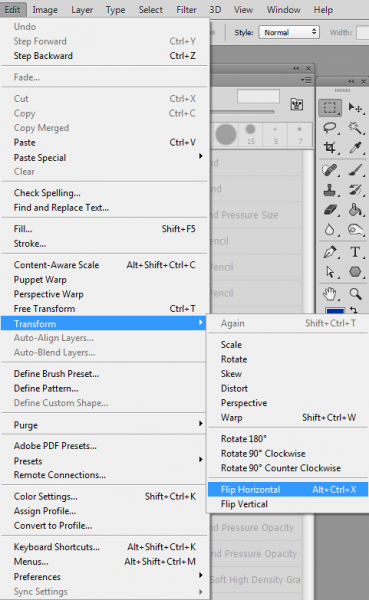 Drawing all sorts of different shapes, and getting their proportions right is a great exercise, where you could apply all the sorts the techniques we discussed here all together.

I have drew some circles, a square & a star here:- 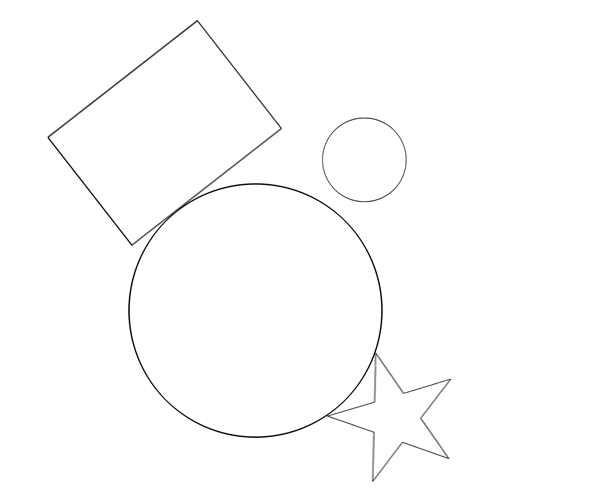 Try to copy the shapes one by one. Copy one shape, then draw the rest based on the size of that shape. You can refer to the exercise in the first part of the series for more help. Here’s the results I got myself:- 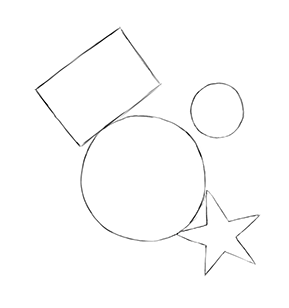 You may notice that measuring proportions on circular shapes like circles is more tricky than it seems like. While the shapes sure look simple, copying them could be even harder than copying more complex drawings.

Let’s do the same exercise, but this time using totally irregular shapes that looks like countries on a map: 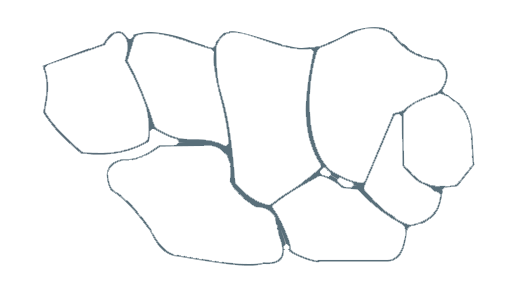 Here’s my attempt at drawing them. I did erase & correct some lines to get them right as much as I could:- 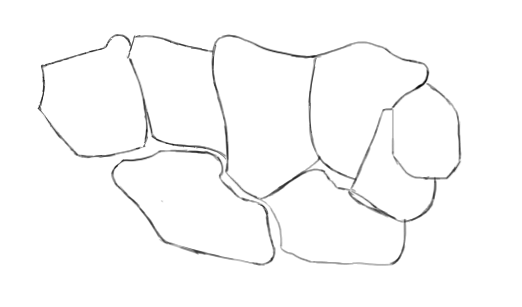 Do I Really Need To Draw Ticks? I Don’t Really Want To Draw That Way

If you’re like I used to be, then the idea of using ticks may sound silly to you. The purpose of these ticks is to simply guide you while you draw, so that you could focus into getting the shapes right without having to worry about proportion as much.

For the sake of clarity, I draw the ticks in my posts a bit big to make them easy to see. You don’t have to draw them that large, you can draw them nearly invisible. As long as you can see & use them.

Once you start to get proportions right, and once measuring becomes easy for you, you will notice that you won’t need them as much, and in some cases, you will notice yourself skipping drawing a tick or two, as you would naturally see them in your head. That’s how you could see professional artists draw without them. If this never happened, you should use anything they will help you draw better.

Using aides like that is too common for learning how to draw. Using a picture frame to frame a picture is one way to get composition right for beginner artists. In general, constructing drawings right is one of the things you should consider learning, as it will help you to draw better at first. The only time I am against using aides is when it gets too technical, or when they don’t help you construct a drawing, which is why I criticized many of proportions measuring methods in my post about them.

For the time being, focus on getting your proportions right, the result is worth all the trouble. Then you’re free to break from any aide you want.

While the exercises in this post may appear very similar, they are different in intricate ways. getting used to them will make it easier to apply them when you do actual artworks.

By the way, remember the irregular shapes you drew earlier? These weren’t random shapes, but the shapes of the carpal bones of the hands:- 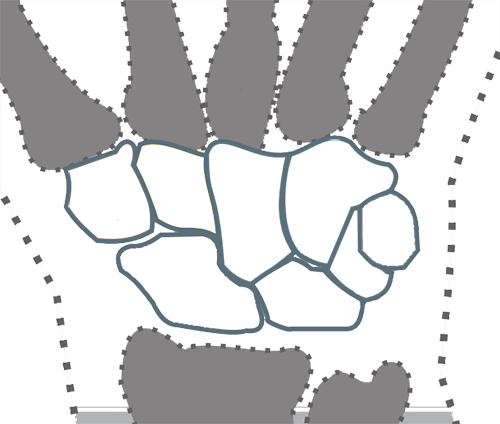 In other word, I taught you some anatomy while helping you with proportions. ^^

I hope this post helped you become a better artist, even by little. If there’s any way I could make this post better, if you have another exercise I omitted, please let me know. :)

Next Lesson:- The Female Human Body Proportions – How To Get Them Right Using the heads count method